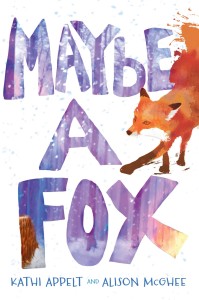 Goodreads Summary: A tale about two sisters, a fox cub, and what happens when one of the sisters disappears forever.

Sylvie and Jules, Jules and Sylvie. Better than just sisters, better than best friends, they’d be identical twins if only they’d been born in the same year. And if only Sylvie wasn’t such a fast—faster than fast—runner. But Sylvie is too fast, and when she runs to the river they’re not supposed to go anywhere near to throw a wish rock just before the school bus comes on a snowy morning, she runs so fast that no one sees what happens…and no one ever sees her again. Jules is devastated, but she refuses to believe what all the others believe, that—like their mother—her sister is gone forever.

At the very same time, in the shadow world, a shadow fox is born—half of the spirit world, half of the animal world. She too is fast—faster than fast—and she senses danger. She’s too young to know exactly what she senses, but she knows something is very wrong. And when Jules believes one last wish rock for Sylvie needs to be thrown into the river, the human and shadow worlds collide.

Writing in alternate voices—one Jules’s, the other the fox’s—Kathi Appelt and Alison McGhee tell the tale of one small family’s moment of heartbreak.

Ricki’s Review: I read this entire book in one sitting because, quite simply, I could not put it down. I sobbed through the entire book because I connected so strongly with these characters. As a mom, I couldn’t imagine my son experiencing the pain that these sisters felt from the loss of their mother. As a sister, I can’t imagine my own sister disappearing. These two connections, along with the stunning portrayal of character and story, made this book feel deeply personal for me. While younger students won’t be moms, and thus, won’t have this personal connection I had with the text, they will be sons and daughters. Regardless of a reader’s point of view, they will connect with this book because it is written so beautifully. I won’t forget this book, and I don’t think other readers will forget it, either.

Kellee’s Review: This book is one I’ll be talking about for a while. I will say it is probably the saddest book that I’ve ever read; however, it is beautiful. It is very hard to explain unless you’ve experienced because it gives hope while also being so terribly sad. The characters, animal and humans, are so thought out and detailed that as you read you feel with them and for them. I was also in awe of the way Kathi and Alison were able to tell such a unique story without the reader ever feeling like it was an odd scenario. Whenever I try to describe this book to someone, they give me quite a weird look, so I just stop trying and tell them they should read it because it is a heart print book. There is no other way to describe it. Like Ricki said, every reader will feel for someone in the book. And every reader won’t be able to deny how beautifully written the prose is.

Teachers’ Tools for Navigation: As you will read in Kathi and Alison’s guest post below, point-of-view makes this story quite powerful. Teachers might ask students to consider the varying perspectives of this story and how they work together to form a cohesive whole. The teacher might provide other examples of texts that feature different points-of-view to compare and contrast authors’ styles. Students might then try their hand at writing in various, connected points-of-view and subsequently analyze how this enhances a narrative.

Discussion Questions: How do the authors unfold the plot in the narrative?; What predictions did you make while reading this story? How might the story have turned out quite differently?; How does Senna’s point-of-view enhance the story for you?; Were there any allusions within the text?; What theme do you take away from Maybe a Fox?

We Flagged: “The baby girl fox, Senna, came into the world in darkness, thirty feet below ground in the end dug out of cool brown earth. She was the middle child, born between her older and younger brothers, the three of them separated by minutes.

The first thing she knew was the feel of her mother’s tongue. Shhh shhh shhh, cleaning her off, licking her into life and warmth and love and safety.

The second thing she knew was the feel and smell of her brothers’ bodies pressed against hers as their mother nursed them, their front paws kneading her belly.

The third thing she knew was that there was someone waiting for her, someone she needed to find.” (p. 75-76)

Read This if You Loved: The House of Purple Cedar by Tim Tingle, Pax by Sara PennyPacker, Counting Crows by Kathi Appelt

A Guest Post from Kathi and Alison about Point-of-View

Finding the best possible point of view for a story is one of the most important choices that a writer can make. The point of view, more than any other aspect of literature, dictates the distance created between the character and the reader. When we embarked upon this story, Alison chose to write from the fox’s story and she decided early on that she wanted to write from an omniscient point of view. This allowed her to place Senna deeply within the pocket of her fox family, and to give our readers an intimate sense of their world. It gave her a way to present the fox-world via the senses of all five members of their family, and put the readers squarely inside of the natural landscape.

When we were first drafting, Kathi chose to write Jules from a first person point of view. However, it didn’t take long before she realized that the first person was too limiting. Yes, first person is quite intimate and there are good reasons to use it, but in this case it felt as though it created too many blind spots. Jules needed a bigger canvas and so Kathi switched to third person. That allowed her to broaden the scope of Jules’ experience, and to let Jules, as well as the omniscient narrator, experience the events as they unfolded.

We always knew that Sam’s point of view would be from the third person too, and he stepped into the story in a way that let the reader get a more objective perspective. We also hoped to show that even though Sylvie’s death primarily impacted Jules and her dad, her loss was felt strongly by the entire community. As well, Sam’s earnest desire for the return of the catamount helped to create a sense of possibility that the other characters couldn’t, simply because of their closeness to Sylvie.

The landscape also gave us a perspective. The woods and rocks, and of course the Slip itself with its local legends, provided not only a backdrop, but its own wild voice, a voice that spoke to each of our characters—fox, Jules, Sam, Elk, Sylvie, Zeke, Dad, and the catamount—in a way that only a wild place can speak.

All this to say that the multiple points of view hopefully helped to create stories within stories that, when woven together, made a single story that was enriched by the viewpoints of each character.

Kathi Appelt is the New York Times best-selling author of more than forty books for children and young adults. Her picture books include Oh My Baby, Little One, illustrated by Jane Dyer, and the Bubba and Beau series, illustrated by Arthur Howard. Her novels for older readers include two National Book Award finalists: The True Blue Scouts of Sugar Man Swamp and The Underneath, which was also a Newbery Honor Book. In addition to writing, Ms. Appelt is on the faculty in the Masters of Creative Writing for Children and Young Adults at Vermont College of Fine Arts. She lives in College Station, Texas. To learn  more, visit Kathi’s website at kathiappelt.com.

Alison McGhee is the New York Times bestselling author of Someday, as well as Firefly Hollow, Little Boy, So Many Days, Bye-Bye Crib, Always, A Very Brave Witch, and the Bink and Gollie books. Her other children’s books include All Rivers Flow to the Sea, Countdown to Kindergarten, and Snap. Alison is also the author of the Pulitzer Prize–nominated adult novel Shadowbaby, which was also a Today show book club selection. She lives in Minneapolis, Minnesota, and you can visit her at AlisonMcGhee.com. 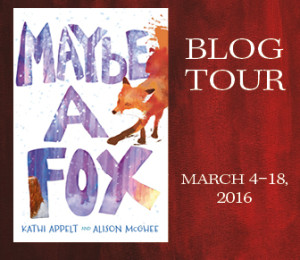 **Thank you to Barbara at Blue Slip Media for providing copies for review and the giveaway. Also, thank you to Kathi and Alison for the wonderfully insightful guest post!**