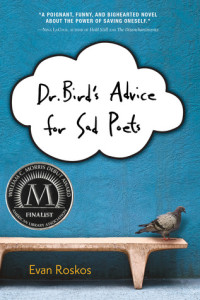 Summary: “I hate myself but I love Walt Whitman, the kook. Always positive. I need to be more positive, so I wake myself up every morning with a song of myself.” Sixteen-year-old James Whitman has been yawping (à la Whitman) at his abusive father ever since he kicked his beloved older sister, Jorie, out of the house. James’s painful struggle with anxiety and depression—along with his ongoing quest to understand what led to his self-destructive sister’s exile—make for a heart-rending read, but his wild, exuberant Whitmanization of the world and keen sense of humor keep this emotionally charged debut novel buoyant.

Ricki’s Review: Dr. Bird’s Advice for Sad Poets is such an important book. It captures depression and anxiety in a way that is both authentic and heart-wrenching at the same time. I wanted to reach into the pages of the book to give James a big hug. Similarly to It’s Kind of a Funny Story by Ned Vizzini, this book employs humor without detracting from the very realness of James’ struggles with loneliness and isolation. Teens (and adults) will find themselves in James because he is depicted in a sympathetic way that is very human. This novel is brilliant and should be in every classroom library.

Kellee’s Review: I concur with everything that Ricki said. Dr. Bird’s is a very special book. On a Top Ten Tuesday list, I wrote that I wished there were more books about kids with chemical imbalances, and Dr. Bird’s is the closest I’ve read yet. Evan Roskos captures the feeling of a manic depressive state. The energy of the writing actually changes as James’s state of mind changes: anxious, manic, depressed. However, what makes it truly special is that even in the end, there is optimism. Although James is fighting his own chemical imbalance, he keeps doing just that—fighting.

Another thing I adored about this book is the idea of art and writing as therapy. James finds solace in photography and poetry, which is a positive lesson for teens because it shows the power of art, writing, and poetry.

Teacher’s Tools for Navigation: It would be interesting for teachers to do literature circles with texts that concern mental health. Students might read this book along with titles like: Forgive Me, Leonard Peacock by Matthew Quick, It’s Kind of a Funny Story by Ned Vizzini, The Perks of Being a Wallflower by Stephen Chbosky, Twisted by Laurie Halse Anderson, Everybody Sees the Ants by A.S. King, and 13 Reasons Why by Jay Asher. I imagine that reading these titles would foster incredibly rich discussions about depression, anxiety, and suicide. In my opinion, we must have these conversations with our students.

Also, Walt Whitman is a huge part of James’s life, and Whitman is mentioned throughout the book. The Whitman references (and James’s poetry emulating Whitman) would great to be examined in a classroom.

Discussion Questions: If James didn’t have abusive parents, do you think his life would be the same? Do you think depression is genetic in his family?; How does James show bravery?; What role does Walt Whitman play in James’ life?

We Flagged: “People in the world suffer from greater calamities than I do. I eat, I have clothes, I have a house. I read about people around the world who survive on less than a dollar a day. I read about how there are hundreds of millions of widows living in poverty. I see ads for kids who are born with ragged lips and jagged teeth. I don’t have anything like that. I just wake up with a deep hatred of myself. How selfish is that?” (p. 115)

“Later, as my father drives me to the pizzeria, his gassy, grumpy body reeking of judgment and anger and disappointment, I can’t help but wonder how little he knows about the depth of my sadness. The depth of my very being. Will he be upset to find me dead, or relieved?” (p. 214)

Read This If You Loved: (Many of these are listed above.) Forgive Me, Leonard Peacock by Matthew Quick, It’s Kind of a Funny Story by Ned Vizzini, The Perks of Being a Wallflower by Stephen Chbosky, Twisted by Laurie Halse Anderson, Everybody Sees the Ants by A.S. King, Reality Boy by A.S. King, Dear Life, You Suck by Scott Blagden, 13 Reasons Why by Jay Asher, Leaves of Grass by Walt Whitman