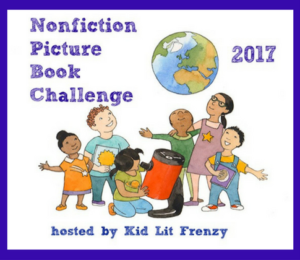 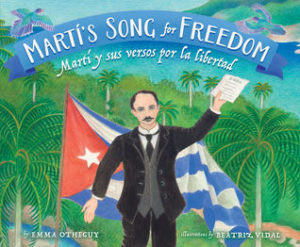 As a boy, José Martí was inspired by the natural world. He found freedom in the river that rushed to the sea and peace in the palmas reales that swayed in the wind. Freedom, he believed, was the inherent right of all men and women. But his home island of Cuba was colonized by Spain, and some of the people were enslaved by rich landowners. Enraged, Martí took up his pen and fought against this oppression through his writings. By age seventeen, he was declared an enemy of Spain and forced to leave his beloved island.

Martí traveled the world, speaking out for Cuba’s independence. But throughout his exile, he suffered from illness and homesickness. He found solace in New York’s Catskill Mountains, where nature inspired him once again to fight for independence.

Written in verse, with excerpts from Martí’s seminal Versos sencillos, this book is a beautiful tribute to a brilliant political writer and courageous fighter of freedom for all men and women.

“A sensitive and poignant tribute to one of Latin America’s most important historical figures.” – School Library Journal, starred review

“A timely story that will inspire many to fight for equality and sing songs for freedom.” -Booklist, starred review

“A direct and approachable introduction to the life and works of Cuban poet and freedom fighter José Martí.” -Shelf Awareness, starred review

Emma Otheguy is a children’s book author and a historian of Spain and colonial Latin America. She is a member of the Bank Street Writers Lab, and her short story “Fairies in Town” was awarded a Magazine Merit Honor by the Society of Children’s Book Writers and Illustrators (SCBWI). Otheguy lives with her husband in New York City. This is her picture book debut. You can find her online at emmaotheguy.com.

Beatriz Vidal is an award-winning painter, illustrator, and teacher. Her work has appeared in well-known publications such as The New York Times Magazine, Woman’s Day, and the New Yorker. Her artwork has also been featured on PBS programs and in numerous exhibitions around the world, including the International Exhibition of Illustrations for Children in Italy and the Society of Illustrators in New York. Vidal divides her time between New York City and Buenos Aires, Argentina. You can visit her online at beatrizvidal.com.

Review: This beautiful bilingual biography deserves all the praise it is receiving. The beautiful pieces of art that accompany the poetic verses turns this picture book biography into a piece of art! I also loved that not only is Martí’s biography in Spanish and English, but so is the author’s back matter.

I also am so glad that I learned about José Martí! I didn’t know anything about the Cuban war for independence and emancipation from slavery. Cuba has such an extensive history that is not taught here, so this story definitely fills a gap in history education. While the story teaches primarily of Martí’s life, the back matter goes deeper into Cuban independence and reading both is definitely going to pique interests to learn more. I think this book would pair nicely with books about our Civil War to compare the United States to other countries’ fights for freedom.

Teachers’ Tools for Navigation: Emma Otheguy was kind enough to share an activity guide for the text. All of the activities come in Spanish and English and can be downloaded at http://emmaotheguy.com/my-new-book/.

Activity 1: “José Martí wrote many letters throughout his life. He wrote about things he found beautiful or interesting, and also about injustices, and how he though they might get better. Write a letter to a friend, a relative, or an elected official about something you’re passionate about. It can be anything you care about, whether it’s helping your neighbors, caring for animals, or respecting the planet–just share how you feel. Then cut out your letter an mail it.” Followed by a outlined letter for kids to feel out.

Activity 2: “Did you know that José Martí was a poet, and that is poetry book Versos Sencillos was written and published right here in the United States? If you ever hear the song Guantanamera you’ll notice words from Marti’s poetry in the song! Read the first stanza of Martí’s poem, then fill in the blanks to create your own poem.”

Activity 3: “Read the book and solve this crossword puzzle”

Activity 4: “As teenagers, José Martí and his friends wrote and published their own newspaper, La Patria Libre (the free homeland), supporting Cuban independence. Can you create a newspaper? Fill out the boxes with the latest news.” Includes a place for Read All About It, Letter to the Editor, and an illustration.

Discussion Questions: How did José Martí play a part in Cuba’s fight for independence?; Did his age when sent to America surprise you?; Why is Cuba such a mix of culture?; How did the author use José Martí’s own words within her biography of him?; If you were to write to your government about an injustice you see in your country, what would you write about?

Read This If You Love: Margarita Engle’s books, Henry’s Freedom Box  by Henry Levine and other biographies about the fight for emancipation in the United States, Nonfiction picture book biographies

**Thank you to Emma Otheguy for providing a copy for review!**