Spelling Troubles Goodreads Summary: Salem Hyde just isn’t like other kids. For one thing, she’s stubborn, independent, and impulsive. For another, she’s a witch. Salem acts first and thinks later—which means most of her thinking involves coming up with excuses!

Good thing she’s been assigned an animal companion, Lord Percival J. Whamsford III. This over-anxious cat doesn’t like Salem calling him “Whammy,” and Salem doesn’t like listening to his long-winded explanations as to why she shouldn’t do something . . . like enter the class spelling bee.

Salem knows she can beat all her classmates at spells, no problem. Too late, she realizes the competition is about spelling words, not magic. And there’s nothing like a misspelled spell to cause all kinds of havoc!

Big Birthday Bash Goodreads Summary: Young witch Salem Hyde is stubborn, impulsive, and loves flying. Her cat companion, Whammy, is nervous, careful, and loves staying on the ground. Somehow, though, they’re best friends. In this second book in the series, Salem is invited to a birthday party, and she wants to make sure everything goes perfectly. But from the invitations to the presents, party games, and spells gone awry, nothing happens exactly the way it should, and she’ll need Whammy’s help to sort it all out.

My Review: I made sure to pick this up at NCTE from Abrams because Frank Cammuso is a big hit in my classroom. His series, Knights of the Lunch Table (great allusion to King Arthur!) is loved by many a reader (so much so that I think my copy of the first in the series just bit the dust and I’ll need to replace it). Although they did tell me that readers of TKotLT are older than the intended audience for Salem Hyde I wanted to make sure to read it because I was sure I was going to enjoy it—and I did! I’m also so pleased with the embracing of graphic novels that have been happening over the last 5 years and even graphic novels for young readers. The amount of graphic novels for young readers is really starting to accumulate and I have been impressed with most of the ones I’ve read, Salem Hyde included. I feel that many of the juvenile graphic novels are well done, multi-layered, and truly respectable just like the YA graphic novels.

Salem Hyde reminds me of Sabrina the Teenage Witch, but a bit more of a trouble maker. Salem made me laugh and made me shake my head. She is one headstrong, independent little lady who, mixed with trying to figure out all of her match powers as she grows up as a witch, is a great main character.

Teacher’s Tools for Navigation: These books will find most of its success in children’s hands; however, it could definitely be used as a read aloud. Also, in both of these books Whammy, at one point, tells Salem a story to help teacher her a lesson and they are both based off of classics. In Spelling Trouble it is Moby Dick and in Big Birthday Bash it is Gift of the Magi. Salem Hyde would be a perfect introduction to these two stories for young readers.  Another aspect of Salem Hyde that I, as a teacher, may use in the classroom are the character introductions that were included. Each new character got a “Getting to know ____” with their likes, dislikes, and other fun facts (magic powers, etc.). This would be a fun activity to do when writing a narrative and trying to develop characters.

Discussion Questions: How does Whammy use stories to help Salem understand?; How is Salem a better friend to Edgar than Shelly?; Why was Whammy exactly what Salem needed? 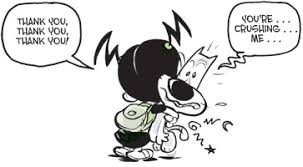 Or “Look Inside” Spelling Troubles on Amazon