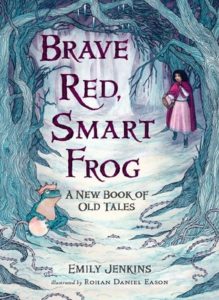 Summary: Step into a wintry forest where seven iconic fairy tales unfold, retold with keen insight and touches of humor.

There once was a frozen forest so cold, you could feel it through the soles of your boots. It was a strange place where some kisses broke enchantments and others began them. Many said witches lived there — some with cold hearts, others with hot ovens and ugly appetites — and also dwarves in tiny houses made of stones. In this icy wood, a stepmother might eat a girl’s heart to restore her own beauty, while a woodcutter might become stupid with grief at the death of his donkey. Here a princess with too many dresses grows spiteful out of loneliness, while a mistreated girl who is kind to a crone finds pearls dropping from her mouth whenever she speaks. With empathy and an ear for emotion, Emily Jenkins retells seven fairy tales in contemporary language that reveals both the pathos and humor of some of our most beloved stories. Charming illustrations by Rohan Daniel Eason add whimsical details that enhance every new reading.

Discussion Guide Created by Me (Kellee):