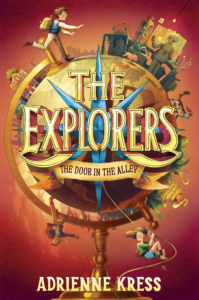 The Explorers: The Door in the Alley
Author: Adrienne Kress
Published April 25th, 2017 by Delacorte Books for Young Readers

Summary: The Explorers: The Door in the Alley is filled with adventure and danger. There are missing persons, hired thugs, a hidden box, a lost map, famous explorers, a risk-averse boy, and a girl on a mission. Not to mention secrets not meant for the faint of heart. But if you are feeling bold, or maybe even a little italic, and if you enjoy derring-dos (and doing dares), this just might be the story for you.

Featuring a mysterious society, a secretive past, and a pig in a teeny hat, The Explorers: The Door in the Alley is the first book in a new series for fans of The Name of This Book Is a Secret and The Mysterious Benedict Society. Knock once if you can find it—but only members are allowed inside. 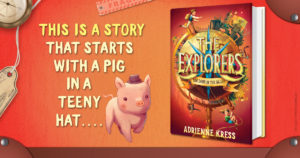 This is one of those stories that starts with a pig in a teeny hat. It’s not the one you’re thinking about. (This story is way better than that one.)

This pig-in-a-teeny-hat story starts when a very uninquisitive boy stumbles upon a very mysterious society. After that, there is danger and adventure; there are missing persons, hired thugs, a hidden box, a lost map, and famous explorers; and also a girl on a rescue mission.

About the Author: Adrienne Kress is a writer and an actress born and raised in Toronto. She is the daughter of two high school English teachers and credits them with her love of both writing and performing. She also has a cat named Atticus, who unfortunately despises teeny hats. Look for her online at AdrienneKress.com, and follow her on Twitter at @AdrienneKress.

Review: I love when narrators break the fourth wall if it is done well, and you’ll learn really early on that it is done well in The Explorers. This hilarious narrator takes us on this adventure with Sebastian, a character that very logical people will relate to, and Evie, a character that people who are bored unless they are on an adventure, will relate to that is filled with more action, adventure, and danger than I thought would come out of this little book. But don’t worry, the narrator keeps it light with funny chapter titles and footnotes. All of this combines to make a book that I loved quite a bit because it is just the perfect balance of adventure, humor, friendship, and mystery. Although, I must warn you about the cliffhanger–WHOA! I’m still recovering.

Teachers’ Tools for Navigation: The Door in the Alley has many opportunities to be a mentor text including discussing footnotes and breaking the fourth wall. Not many books use either of these yet The Door in the Alley uses both quite well. Discussing these will also lead to a perfect conversation about voice. Normally voice is saved for first person books but because we have a narrator that although not a character in the story definitely has a voice, it would be interesting to talk to students about how that worked in this book.

Discussion Questions: What do you think is going to happen in the next book?; Why do you think the author chose to have the narrator break the fourth wall and speak with you, the reader?; Sebastian and Evie are quite opposites, and normally they would seem like an odd pairing; however, they seem to work perfectly together–what do you think each of them brings out in the other?; Evie is searching for her grandfather because he is in trouble, but what is she truly searching for?; What do you think Sebastian’s parents are thinking right about now?!

Flagged Passages: “In all the confusion, with the pig and the teeny hat and the zigzag man, he had completely forgotten about the thing he had been trying to forget about. In one way, it meant he had done an excellent job at avoiding it up until now; on the other, it meant hat his guard had been down. For, sure enough, the man had turned down an alley. The only alley that existed on the street. That connect to another street. And there was only one thing down that alley.

Sebastian approached it with caution, his expression slowly morphing into one the pig had been wearing all the time. Terror. He stood at the end of the dark passageway and peeked his head around the corner only to see the man standing right by the door. And right under the sign that read…

Read This If You Loved: The Wig in the Window by Kristen Kittscher, FRAMED by James Ponti, Loot by Jude Watson, Nickel Bay Nick by Dean Pitchford, and other mysteries where kids have to solve a problem because adults won’t listen to them

Visit the Other Stops on the Blog Tour:

**Thank you to Josh at Random House Children’s Books for providing a copy for review and hosting the blog tour!**

6 thoughts on “Blog Tour with Review!: The Door in the Alley (The Explorers #1) by Adrienne Kress”