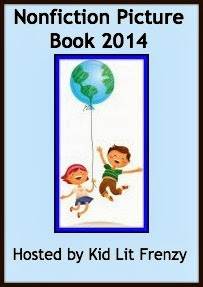 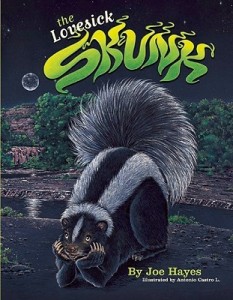 Goodreads Summary: Joe Hayes must have had a singular growing up in the Arizona desert because he sure loves to write stories about it. And he tells those stories of his so much to audiences all over the United States that it seems like the stories just get more and more fantastic. I bet you’ve already heard the first tall tale he wrote—The Gum-Chewing Rattler—about a rattlesnake who chewed bubblegum. Yes, it’s true. That scary snake even blew huuuuuge bubbles.

Now Joe has written a new story about his early years in Arizona. Joe, the kid, was a creature of habit. If he decided he liked to do something, he would do it over and over again. Like wear the same T-shirt until it nearly fell apart or use the same pencil until he’d sharpened it down to a nub. He also had a pair of black-and-white high-top sneakers that he loved to wear. He wore them every day. “Get rid of those shoes,” his mother told him one morning. “They smell terrible!”

Did Joe listen? Not until he met the back end of a skunk.

And this wasn’t just an ordinary skunk, but one who was lovesick.

But I’m not going to tell you who she was in love with. You’ll have to find that out for yourself.

About the Author: Joe Hayes is one of America’s premier storytellers, a nationally recognized teller of tales—true and tall—from the Hispanic, Native American, and Anglo cultures of the American Southwest.

My Review and Teachers’ Tools for Navigation: The Lovesick Skunk reminds me of a tall-tale or other traditional literature. The way it is told, with a bit of  humor and moral, and even how the book is set up with the whole page illustrations on one page and the text on the other are both reminiscent of traditional tales. I think Hayes’s story is a great introduction to personal narrative about a favorite object as well as writing a story with a moral. It could definitely be used as a mentor text.

Discussion Questions: Do you have anything, like Joe’s shoes, that are your very favorite and if you could wear them every day you would?; Do you think Joe thought about keeping his shoes even after the “Skunk incident?”

Read This If You Loved: Family Pictures / Cuadros de Familia by Carmen Lomas Garza and other picture book memoirs

6 thoughts on “The Lovesick Skunk by Joe Hayes”