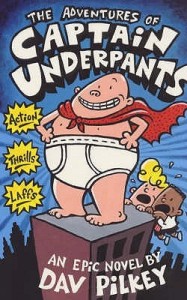 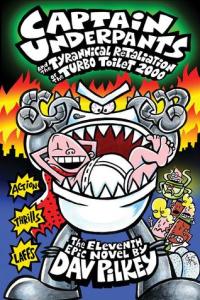 Goodreads Summary #1: Pilkey plays with words and pictures, providing great entertainment. The story is immediately engaging – two fourth-grade boys who write comic books and love to pull pranks find themselves in big trouble. Mean Mr. Krupp, their principal, videotapes George and Harold setting up their stunts and threatens to expose them. The boys’ luck changes when they send for a 3-D Hypno-Ring and hypnotize Krupp, turning him into Captain Underpants, their own superhero creation.

Goodreads Summary #11: When the Incredible Robo-Plunger defeated the evil Turbo Toilet 2000, George and Harold thought their toilet troubles were over. Unfortunately, their porcelain problems were only beginning . . . Just when you thought it was safe to flush . . . The Turbo Toilet 2000 strikes back! The carnivorous commode known for devouring everything in its path has built up a real appetite . . . for REVENGE! Join Captain Underpants for another epic showdown of Wedgie Power vs. Potty Power as our tighty-whitey-wearing superhero GOES TO ELEVEN!

My Review and Teachers’ Tools for Navigation: Ever since I started teaching I have had Captain Underpants fans in my classroom. Readers (especially boys though, like all books, it is not exclusive) love these books. When I started teaching intensive reading, my students loved that I read so much but were astonished that I had never read a Captain Underpants book. So, during the summer of 2012, I read the entire series that was out at the time.  And suprsingly, I am happy I did. I enjoyed the books so much, and I found many different ways that I could use in the series in classroom. As I read I not only enjoyed the stories (well most of them; the booger one was quite gross), but I kept notes on different ways each book could be a mentor text.  I know that students already love the books so I would love to be able to use them in the classroom. I think that part of what makes Pilkey’s humor work is that he never talks down to his reader. The humor is intelligent and witty, and he makes sure to have his books be as entertaining as possible to keep the reader’s attention.

Teachers’ Tools for Navigation: Some of my favorite things that are addressed in the series are spelling, grammar, vocabulary, and puns. The spelling is not directly addressed; however, Harold and George misspell a lot of words and it would be good to use to talk about phonics and spelling.  Also, each book begins with an anagram which is great word play.  The grammar is sporadic only showing up in some books, but the vocabulary is in all of them.  Some vocabulary I found was billowing, narratively convenient, fizzled, improbability, jubilant, mock, scurried, and merciless and that is just in book 3! Also the puns in each book are really quite clever (check out p. 34 in #11 and any of the flip-o-ramas to see what I mean). Each book also has some great alliteration (#11, p. 29, 27, 208)- each title alone has alliteration in them. There are also allusions and onomatopoeias!

Additionally, I love the set up of the novels. They are a great mix of novel, graphic novel, comics, and picture books. It is a great transition between picture books and Diary of a Wimpy Kid. I especially like the flip-o-ramas. They are unique to the Captain Underpants books and I think it puts a great interactive and kinesthetic feel to the books.

One thing I do not understand is why these books are challenged. Yes, they have some potty humor. Yes, the adults aren’t the best representation of teachers. Yes, it is silly. But they are harmless and actually have some really great qualities to them.

Discussion Questions: In the first Captain Underpants, Harold and George brainstorm a superhero including his name and then create a comic based on their superhero. With a partner, brainstorm a name for a superhero and then complete a story to go along with your superhero. To expand it even more, complete a comic for your superhero.; In #11 novel, time travel plays a large part of in the plot. What event could you go back in time to try to change?; In some of the Captain Underpants books, there are grammar, convention, and spelling mistakes. Why do you think Dav Pilkey makes the choice to use incorrect grammar? What mistakes idd you find?; In #11, Harold and George end up being cloned (kind of). What would you do if there were two of you?