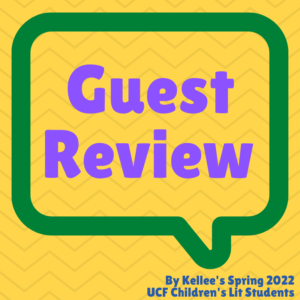 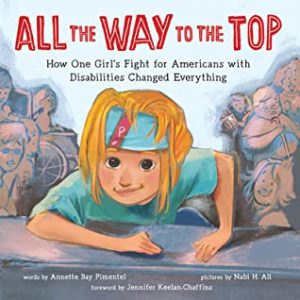 Summary: This is the story of a little girl who just wanted to go, even when others tried to stop her.

Jennifer Keelan was determined to make a change―even if she was just a kid. She never thought her wheelchair could slow her down, but the way the world around her was built made it hard to do even simple things. Like going to school, or eating lunch in the cafeteria.

Jennifer knew that everyone deserves a voice! Then the Americans with Disabilities Act, a law that would make public spaces much more accessible to people with disabilities, was proposed to Congress. And to make sure it passed, Jennifer went to the steps of the Capitol building in Washington DC to convince them.

And, without her wheelchair, she climbed.

ALL THE WAY TO THE TOP!

“A necessary testament to the power of children’s voices.” –Kirkus Reviews

“Pimentel offers a great look at a young activist creating change and a better understanding of the importance of the ADA.” –School Library Journal

Annette Bay Pimentel has published two picture book biographies: Mountain Chef (Charlesbridge, 2016) about a Chinese American who helped inspire the creation of the National Park Service which won the Carter G. Woodson Award, and Girl, Running (Nancy Paulson, 2018) about the first female to run the Boston Marathon, which was a JLG pick and received a starred review.

​Jennifer Keelan-Chaffins joined the disability rights movement at the age of six and has been a passionate advocate ever since. In 1990, she received the Americans With Disabilities Act Award. She earned her B.S. in Family and Human Development. She really wants to help children with disabilities.She lives in Colorado with her mother , and her service dog Mya.

​Nabi H. Ali is an illustrator of Tamil descent based in Orange County, California. He really likes to be part of things that bring inclusivity into art and media. His hobbies include painting, researching South Asian culture, and writing poetry.

Review: This story is about a young girl named Jennifer. She suffers from Cerebral Palsy and uses a wheelchair. The story follows her as she first struggles to go around town when the sidewalks don’t have ramps, to get into the school where there is only stairs, and the teachers say she can’t come in–all because she is in a wheelchair. She learns to find her voice and works in groups to fight for equality. She goes to multiple protests around the states to fight for the ADA (Americans with Disabilities Act). When Congress denies the act, there is a rally in Washington, D.C. and because of the stairs, protestors in wheelchairs could get into the House; the older protesters left their chairs and climbed the stairs. When Jennifer tried, she was told she was too young and couldn’t do it. This did not stop her; she did it anyway. The bill was passed soon after.

I love this book so much as it shows students that everyone can do anything, and it’s something that they all should read about everyone regardless of how they look. One of my favorite things is that this book is based on a true story and in the back of the book it goes into more details as to why the ADA was such an important thing. It also has a timeline and milestones for legislation for those with disabilities.

Teachers’ Tools for Navigation: This book will be fantastic to use in the classroom in multiple ways:

Of course you can use it with history. This will teach students about important events with in our countries history. Teach them about how much the ADA changed the lives of many people.

This will also be used to teach students about inclusion and diversity and they are important tools to have in life. Making sure everyone feels included is not only good it’s important. 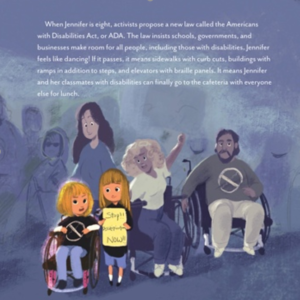 Thank you, Alicia, for your review!