I am happy to start Pride Month with this interview as books with representations of all families need to be shared with all students as “mirrors, windows, and sliding glass doors” (Sims-Bishop, 1990). As an educator in Florida, we are being challenged as are the books we love and students need. Sharing diverse representation, of race, culture, sexual & gender identity, and more, will only lead to empathy and a safer more happy world. 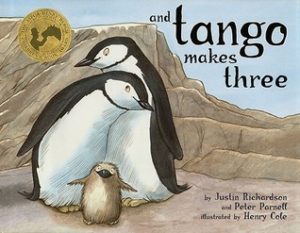 Summary: In the zoo there are all kinds of animal families. But Tango’s family is not like any of the others. This illustrated children’s book fictionalizes the true story of two male penguins who became partners and raised a penguin chick in the Central Park Zoo.

Introduction from Simon & Schuster: Florida’s new law, to take effect in July, prohibits classroom “discussion” and “instruction” about “sexual orientation” and “gender identity” in grades K-3, as well as any discussion or instruction about these topics that would be considered not age appropriate in the eyes of the State in grades 4-12. And Tango Makes Three, a multiple award-winning picture book, tells the simple and true story of two male penguins in the Central Park Zoo who pair-bonded, built a nest, and with the help of a kind zoo-keeper, together hatched an egg.

The book is written for children ages 4 to 8, but the new Florida law may prevent their teachers from sharing or discussing it with them. Teachers use And Tango Makes Three and books like it to help children with same-sex parents feel welcome in their school and to help their classmates understand the different family structure of their classmates. Lessons like these are invaluable to children of same-sex parents. Censorship of facts about gay families and lives, like that required by the new law, threatens the mental health of children with same-sex parents as well as that of LGBTQIA+ children themselves.

Kellee: How did you first learn about Tango and her family? And why did you choose to tell their story?

Peter Parnell & Justin Richardson: We first read about the penguins over breakfast one Saturday in a New York Times article by Dinitia Smith entitled “Love That Dare Not Squeak Its Name.”  Justin said, “Peter, you have to listen to this,” and there was just something about hearing the story read aloud that made us think of a children’s book.

As prospective parents ourselves, we knew that there was an unmet need among the children of gay parents for stories involving families like ours.  And we knew that while many parents who are not gay might wish to introduce their children to the subject of gay families, many felt unsure as to how to approach the topic, what language to use, how specific to get, and so on.  This story seemed to us a perfect way for them to open a discussion of about queer families with the confidence of knowing that they were doing it in an age-appropriate way.

K: What was your hope in sharing Tango’s story?

PP & JR: Like any author, we hoped the book would find an audience. We wanted kids to be moved by the story, and to expand their understanding and awareness of different kinds of families. We are most gratified when we hear the book has been a part of a child’s bedtime routine or a family’s life for years.

K: When you first heard about And Tango Makes Three being challenged, what were your first emotions? Reaction?

PP & JR: We did anticipate that there would be some resistance to the book when we wrote it. But we could never have imagined then the extent of the challenges it would face or the strength of the support it would get around the world.

I think you never forget the first challenge. For us, that was in Missouri, when a library director who had received complaints moved our book from the fiction to the (less browsed) nonfiction section in order not to ‘blindside’ parents. The story got picked up by the AP (much thanks to a local news reporter who read library’s log looking for stories). We heard about it on a Saturday night, and were like, “Okay, this is happening…”  The story literally travelled around the world. Stephen Colbert held up the book on “The Colbert Report,” and proclaimed it the Number Two Threat to the American Way of Life (the number one threat was people who are not blond).

We have a coffee mug at home that we stumbled across in a toy store with our daughter a few years ago. On it are displayed a dozen or so banned book titles. There’s Animal Farm, 1984, and The Origin of Species. And our title is snuggled in there amongst the rest of them. We thought the juxtaposition of our book with these great works was kind of hilarioius. But we’d by lying if we said we weren’t also proud. In the years that we read TANGO aloud at the ALA’s Banned Books Week Readout in Chicago, we did so alongside folks like Steven Chbosky, Robie Harris, and Judy Blume. It’s an honor to be in such great company. But in truth, being banned is painful and infuriating. Any pleasure one can squeeze out of it is worth holding onto, if it softens the blow.

K: The “Don’t Say Gay” bill does not allow any sexual orientation or gender identity instruction in grades K-3. I would argue that And Tango Makes Three is not INSTRUCTION of either listed things; do you agree?

PP & JR: The law is purposely written to be vague, leaving terms like “instruction” and “sexual orientation” undefined. We recently lampooned that aspect of the law in the Washington Post, showing that banning discussion or instruction about sexual orientation and gender identity means there can be no talk about men and women marrying or indeed any book that depicts characters as having a gender.

We wouldn’t recommend going down the rabbit hole of arguing what does or doesn’t qualify as instruction. The law should be attacked for its discriminatory intent, it’s manipulation of parent fears to stoke the political careers of its authors, and the damage it will do to children and families in Florida.

K: If someone tried to state that And Tango Makes Three is not age appropriate for K-3, what would your counterargument be?

PP & JR: The book actually grew out of Justin’s experience as co-author of a book about the very real challenges parents face when trying to address sexual topics with their children–Everything You Never Wanted Your Kids To Know about Sex (But Were Afraid They’d Ask). It’s hard to imagine that anyone who actually read Tango could consider it as not age appropriate; however, we would place the burden on anyone who made such a claim to explain it. Parents who hold negative views about gay families may object to the book, because it presents one such family in a positive light. But that’s quite a different matter than describing it as inappropriate for all children based on their age. Explaining that sometimes two people of the same sex form a couple and make a family is appropriate at any age.