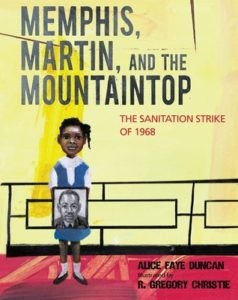 Summary: This historical fiction picture book presents the story of nine-year-old Lorraine Jackson, who in 1968 witnessed the Memphis sanitation strike–Dr. Martin Luther King Jr.’s final stand for justice before his assassination–when her father, a sanitation worker, participated in the protest.

In February 1968, two African American sanitation workers were killed by unsafe equipment in Memphis, Tennessee. Outraged at the city’s refusal to recognize a labor union that would fight for higher pay and safer working conditions, sanitation workers went on strike. The strike lasted two months, during which Dr. Martin Luther King Jr. was called to help with the protests. While his presence was greatly inspiring to the community, this unfortunately would be his last stand for justice. He was assassinated in his Memphis hotel the day after delivering his “I’ve Been to the Mountaintop” sermon in Mason Temple Church. Inspired by the memories of a teacher who participated in the strike as a child, author Alice Faye Duncan reveals the story of the Memphis sanitation strike from the perspective of a young girl with a riveting combination of poetry and prose.

Alice Faye Duncan is the author of multiple children’s books, including Honey Baby Sugar Child, which received an NAACP Image Award Nomination for Outstanding Literary Work for Children. She is a librarian in Memphis and is a National Board Certified Educator.

★ “Duncan creates 9-year-old Lorraine Jackson to tell the full story of the Memphis sanitation strike of 1968. The author’s choice to not focus on the singular efforts of King but on the dedicated efforts of community signals a deeply important lesson for young readers. Strong historical details back up the organizing feat…(t)he narrative is set in vignettes that jump between verse and prose, set against Christie’s bold paintings… encapsulates the bravery, intrigue, and compassion that defined a generation, presenting a history that everyone should know: required and inspired.” – Kirkus Reviews, starred review

★“In this impressive picture book, a character inspired by an African American family involved in the 1968 Memphis sanitation strike tells her first-person account of the experience in verse and prose. Each full-page spread functions as a chapter with…informative back matter (which)…includes a time line and source notes. The excellent gouache art is typical of Christie’s distinctive and impactful style, with impressionistic images set on pages saturated with shades of blue, yellow, or orange. Most gratifyingly, the determination of the characters and the import of this part of history are imbued with dignity throughout.” – Booklist, starred review

Review: I was lucky enough to hear Alice Faye Duncan speak about this book. As a librarian, she wanted to tell this story, and, if I remember correctly, she wrote many different versions of this story. And when Boyd Mills Press first acquired her story, she once again revised the text. And wow! I am so happy that she kept going because the book which she, with R. Gregory Christie’s absolutely beautiful illustrations, created a brilliant picture book.

It wasn’t until I read Chasing King’s Killer that I knew the whole story about why Martin Luther King, Jr. was in Memphis at the time he was assassinated. Thirty-six years old is too late to learn about the last fight that MLK was able to stand behind. The story is written in vignettes in a first-person point of view of a Memphis resident who was nine at the time of the sanitation strikes. With the past look, it allowed Duncan’s character to have insight into things a nine-year-old may not while also being able to give a first hand account. The mixture led to a historical narrative filled with emotion and truths.

Teachers’ Tools for Navigation: Use this book. However it works in your classroom. It can be used in a history, reading, writing, or art lesson. Or the text for all of the above. The writing, art, and history in this book is one that needs to be shared.

Read This If You Love: Be a King by Carole Boston Weatherford, Chasing King’s Killer by James L. Swanson, Books (historical fiction or nonfiction) about the Civil Rights Movement

**Thank you to Workman Publishing for providing copies for review!**