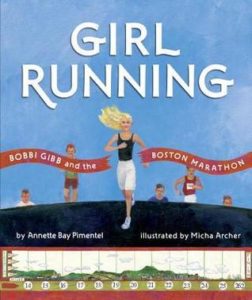 Summary: The inspiring story of the first female to run the Boston Marathon comes to life in stunningly vivid collage illustrations.
Because Bobbi Gibb is a girl, she’s not allowed to run on her school’s track team. But after school, no one can stop her–and she’s free to run endless miles to her heart’s content. She is told no yet again when she tries to enter the Boston Marathon in 1966, because the officials claim that it’s a man’s race and that women are just not capable of running such a long distance. So what does Bobbi do? She bravely sets out to prove the naysayers wrong and show the world just what a girl can do.

* “A bright salutation of a story, with one determined woman at its center.”–Kirkus Reviews, starred review

Review: I first learned about Bobbi Gibb when I read The Girl Who Ran by Frances Poletti & Kristina Yee and after reading it, I knew I wanted to learn more about Bobbi Gibb because she did so much for women’s progress when it came to running. Without her standing up and going against everyone, it would have taken longer for women to be accepted as marathoners.

Pimentel does a beautiful job showing Gibb’s inspiration, determination, and journey. I loved seeing more about what happened during the marathon than what I knew before and especially was verklempt by the support she found when ran by Wellesley College and the women at the college came out and cheered for her. I also loved learning that the other runners supported her!

Through the afterwords, I also found out that Gibb had to wait 30 years before she was listed as the female winner of the Boston Marathon in 1966, 1967, and 1968 races because the officials wouldn’t honor her as a runner. This shows that so often even when the masses support something, it is a systemic issue that needs to be fixed.

Last but not least, I must share how much I adore Archer’s artwork. I was a big fan of her work in Daniel Finds a Poem, and once again I found that her illustrations were the perfect addition to the story being told.

Teachers’ Tools for Navigation: Gibb is one example of an American that changed history but may not be well known. I think it would be fascinating to introduce Gibb using Pimentel’s picture book as a way to start discussions about normal people changing the world. I would then share other stories about heroes like Rosa Parks, Malala Yousafzai, and Jesse Owens. I’d also reference other books like Be a Changemaker and 31 Ways to Change the World. The research could also be narrowed down to just sports; however, I think it is a wonderful discussion to have about how Gibb may have “only” changed marathons, it is part of a bigger movement. 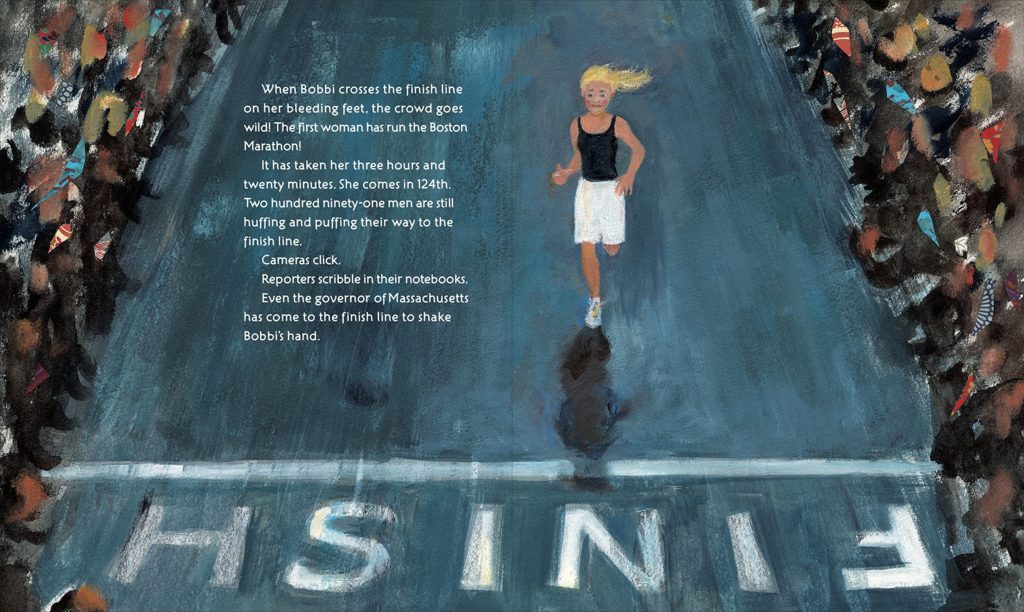 Read This If You Love: Picture book biographies, Women’s rights