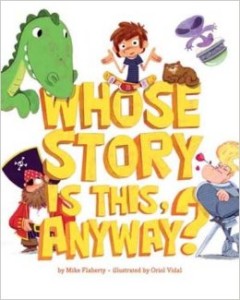 Summary: What’s this book about? That depends on who you ask. Our humble narrator thinks he’s got a great story for you, but he barely begins before he’s interrupted . . . by a scallywag pirate with a thrilling legend of mermaids and sea monsters! Soon an entire cast of colorful characters—including a hungry dinosaur, an alien bent on world domination, and a heroic knight—derails the boy’s saga. Everyone has a tale to tell—but if they can all get on the same page, this might turn out to be the best story ever!

About the Author: Mike Flaherty is an author and occasional hockey coach trying to keep up with his two kids and rather voracious cats. His secret lair is hidden somewhere in New Albany, OH, and he would be the world’s greatest super-villain if he could figure out how to get his Doomsday Device working. Until then, he’ll just keep writing stories.

About the Illustrator: Oriol Vidal is an illustrator and storyboard artist based in Barcelona, Spain. He graduated from UB Barcelona with a degree in Fine Arts. Including illustrating books and magazines, Oriol has worked in animation where he developed character designs and storyboards for clients in the US, France, UK, South Korea, and Spain. He happily works and lives with his little daughter, his wife, his cat, and his rowdy budgie.

Kellee’s Review: This book made me laugh out loud. The characters are zany, the premise is fun, and the outcome is perfect. I also loved the comic-esque layout of the book with dialogue bubbles and colorful illustrations. Trent and I were enthralled with the cast of characters–the author really made sure to include all kids’ favorites.

Ricki’s Review: This is a book that somehow manages to cram in almost all of my son’s favorite things—and in an interesting, humorous way! With each page, my son says, “Ooooh!” because he is so excited by the characters. I particularly like how the narrator has a cat. Too often, male narrators always hold dogs and female narrators always hold cats. My son, who loves cats, is catching on to this, and it frustrates me. The creativity in this book is admirable, and kids will love it.

Teachers’ Tools for Navigation: This book will be such a fun addition to the classroom. It can be used for writing activities and for discussions (or as a mentor text) for point of view, voice, dialogue, humor, or narration. First, it would be really fun to rewrite this story from different points of view. Since each character thinks it is their story, their view of how things went down would be very different than the boys. It is also so great how the author gives each character their own voice and personality which would lend it to be a good mentor text for distinguishing voice and using dialogue. Also, students would have so much fun writing their own story about how each character ended up on this particular beach with this boy.

Discussion Questions: Why does the boy change is mind at the end of the book?; Which character would you want a whole story about?; How do you think each character ended up at this beach?; How would you have reacted if you were the boy? 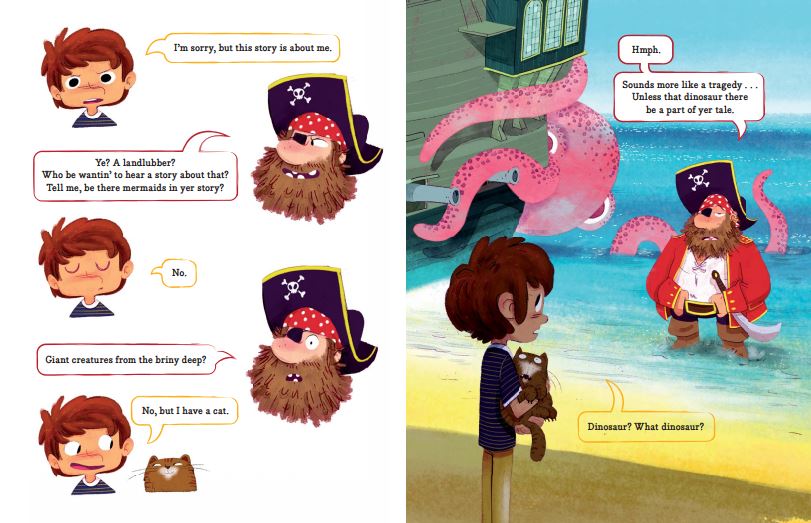 Read This If You Loved: Faraway Friends by Russ Cox, By Mouse & Frog by Deborah Freedman, Little Red Writing by Joan Holub, Nibbles by Emma Yarlett, Journey by Aaron Becker

**Thank you to Sterling Publishing for providing copies for review!**

4 thoughts on “Whose Story Is This, Anyway? by Mike Flaherty”