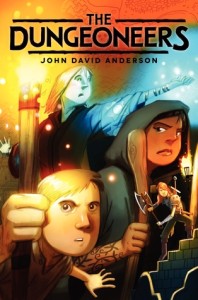 Publishers Summary: The Dungeoneers is an action-packed, funny, and heartbreaking middle grade fantasy-adventure from the author of the acclaimed Sidekicked and Minion, John David Anderson.

The world is not a fair place, and Colm Candorly knows it. While his parents and eight sisters seem content living on a lowly cobbler’s earnings, Colm can’t help but feel that everyone has the right to a more comfortable life. It’s just a question of how far you’re willing to go to get it.

In an effort to help make ends meet, Colm uses his natural gift for pickpocketing to pilfer a pile of gold from the richer residents of town, but his actions place him at the mercy of a mysterious man named Finn Argos, a gilded-toothed, smooth-tongued rogue who gives Colm a choice: he can be punished for his thievery, or he can become a member of Thwodin’s Legions, a guild of dungeoneers who take what they want and live as they will. Colm soon finds himself part of a family of warriors, mages, and hunters, learning to work together in their quest for endless treasure. But not all families are perfect, and even as Colm hones his skills with fellow recruits, it becomes clear that something from outside threatens the dungeoneers–and perhaps something from inside as well.

My Review: This is one of those fantasy novels that transports you to another place and throws you into an adventure that keeps you guessing and reading. In The Dungeoneers, I loved going to school with Colm and learning all about dungeoneering ways including how to be the best rogue, history of dungeoneering, swordplay, and all about monsters. This aspect reminded me a bit of Harry Potter because I got so sucked into his schooling and education, like I did with Harry’s, because I wanted to know everything I could about this world. The Dungeoneers also has some majorly suspenseful moments which makes sense in a book about stealing treasure from dungeons. In addition to his world building, he really knows how to build some characters! The three other members of Colm’s guild are such well-rounded characters and all so different. I can picture each of them, and I so want to be their friends (even Lena, who is a bit barbaric). I also loved the plot twist at the climax of the book! I did not see it coming! Just wait for it everyone!

Teachers’ Tools for Navigation/We Flagged: First and foremost, if you teach middle school, you should probably buy this for your classroom. High fantasy and adventure lovers are going to eat this one up.

Also, if you want to talk to students about building characters or setting, this book can definitely be a help with either. There are specific sections in this book that could be pulled out and used to discuss imagery, word choice, and characterization:

“In the flickering torchlight it was hard to make out all of her features clearly, but he couldn’t miss the sharp chisel of her chin, like a weapon itself. Her crimson hair was cropped short in the back, falling across one eye in front, the other shining brown in the flicker of light. Her lips were pursed, pulled tight against her teeth in a determined smirk.” (p. 93)

“Except Quinn didn’t look like he could call lightning from the sky or produce fireballs from his fingers. Colm had expected the first wizard he met to be more in keeping with the descriptions from his book–white-bearded and billowing and larger than life. Quinn looked barely big enough to summon his own shadow.” (p. 96)

“In contrast to the dreary tunnel behind them, the great hall before them was filled with light. Huge chandeliers hung from chains of gold, the flicker of a thousand candles casting fiery halos against the ceiling. Giant marble pillars anchored the four corners of the room, and a hug winding staircase with gold rails led both up and down in its center like a vortex. The floors were polished marble as well, dark green and buffed to a mirror sheen. A strange clock with twenty-four separate hourglasses hung over a set of huge double doors…” (p. 115)

Discussion Questions: If you were Colm, would you have gone with Finn?; What secret do you think Wolfe is keeping?; Lena is expected by her family to do well as a barbarian because of her upbringing. How would it feel to have that type of pressure put on you?; Colm makes a decision at the end of the book–do you agree with it or not?

Obviously The Dungeoneers owes a lot to fantasy tropes and conventions that have been around since Gandalf packed his first pipe. In fact, while writing it I sometimes felt like I should roll a d20 to see what my characters would do next (here’s hoping the book is a critical hit—ah, nerd humor). Afternoons spent playing Baldur’s Gate or reading Mercedes Lackey (or in my younger days, Lloyd Alexander) coalesced into a love of sword-swinging, lock-picking, monster-bashing rogues who risk everything on the hopes of finding that fabled cache of riches at the end of the corridor. In short, I was raised by dragons. Maybe I’m a Targaryen.

Obviously popular culture is not hurting for dungeoneers of interest, but I thought I would pick five key dungeon divers that had a distinct influence on me and the book. Note: I am defining a dungeoneer as anyone who willingly enters into some dank, creature-and-trap-infested cavern, catacomb, crypt, tomb or lair with the express purpose of taking whatever shiny, valuable objects are to be had. In other words, I’m kind of liberal with my use of the word.

5. Minsc and Boo: If you’ve ever played the game Baldur’s Gate, you will know these two. Minsc, the butt-kicking, infinitely quotable ranger, and his trusty hamster, Boo. Minsc was a tank and liked to carry big swords. More than that he had a big heart and recognized a noble enterprise, especially when it required some head bashing. Favorite quote: “Make way evil! I’m armed to the teeth and packing a hamster!

4. Ellen Ripley. All right, this one is a stretch, I admit, but in Aliens she does go down into a lair and fight off monsters (lots of them, including a queen) to rescue something she treasures (the little girl, Newt). Plus ever since I saw Aliens I’ve been drawn to tough female characters. I won’t lie—there’s a little bit of warrant officer Ripley’s feistiness in The Dungeoneers’ Lena Proudmore, though Lena doesn’t get to fire a grenade launcher (much to her chagrin).

3. Bilbo Baggins. You could name several characters from Tolkien’s mythos that fought their way out of dungeons, but Bilbo gets the cake for not coming out empty-handed. In fact, it’s the Burglar’s snatching of the Precious that drives the mythology. What did you find down there in the goblin caves, Bilbo? Oh—just the makings of a gazillion-dollar franchise. Finn Argos would be proud.

2. Link. Yes, it’s another video game, but for me, Link was the start of my love affair with dungeoneering. Link never met a rupee he didn’t like and spelunking through monster-infested lairs in search of Zelda was in his spritely 8-bit blood. I can still remember playing the original Zelda and getting eaten by an undulating stack of pancakes or impaled by a triceratops all because I didn’t know I was supposed to feed it bombs. To this day I still carry around a candle and a big stick of meat. Thank you Nintendo for stimulating my imagination and sucking away my time.

1. Indiana Jones. No sword (except in the second movie, and then it’s more of a machete). No armor. No dragons or ogres or orcs (though the Nazis are monstrous enough). But Indy, for me, is the archetypal treasure-hunter. Not only was he the dashing film hero of my childhood (and what I wanted to be when I grew up until I realized that everything cool had already been dug up already), he also helped engender my love for wise-cracking, whip-smart, ruggedly-charming, and occasionally flawed protagonists. His make-it-up-as-you go philosophy and daredevil antics were often replicated by a young, eight year old boy named Dave, who would pretend the floor was made of lava as he jumped from dining room table to couch and back again. Plus Indy knew that the greatest treasures always came at a price, a lesson that struck a chord with me.

So those are my top five. I’m sure your list is different. That’s the cool thing about inspiration—there are a lot of wells, and we get to drink from whichever ones we please. Who knows, maybe in twenty years some kid will be making a list of his favorite dungeoneers and put Colm Candorly somewhere near the top.

Right behind a bald guy and his hamster.

About the Author: John David Anderson is the author of Sidekicked and Minion. A dedicated root beer connoisseur in his spare time, he lives with his wife, two kids, and perpetually whiny cat in Indianapolis. You can visit him online at www.johndavidanderson.org.
Twitter: https://twitter.com/anderson_author
Facebook: https://www.facebook.com/JohnDavidAndersonAuthor?ref=hl

Make sure to visit other stops on the blog tour:

**Thank you to Walden Pond Press for providing a copy for review and giveaway!**