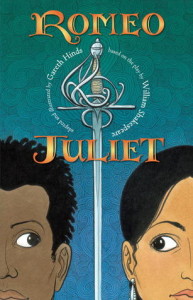 She’s a Capulet. He’s a Montague. But when Romeo and Juliet first meet, they don’t know they’re from rival families — and when they find out, they don’t care. Their love is honest and raw and all-consuming. But it’s also dangerous. How much will they have to sacrifice before they can be together? In a masterful adaptation faithful to Shakespeare’s original text, Gareth Hinds transports readers to the sun-washed streets and market squares of Shakespeare’s Verona, vividly bringing the classic play to life on the printed page.

Review and Teacher’s Tools For Navigation: This graphic novel does for Shakespeare’s text what Leonardo DiCaprio’s Romeo and Juliet film did for the play. It makes it so accessible and helps the reader SEE what is going on in the play so that the Shakespeare’s words are easier to interpret. This graphic novel should be in every classroom and school library and should be used whenever the play is.  I also found Garth Hinds’s afterword very fascinating and gives a deeper look into Verona.

Discussion Questions: Gareth Hinds decided to make his characters multicultural to show the universality of the story. How does making his characters multicultural make the story more accessible and show the universality?; Garth Hinds had to abridge the play a bit to fit it into the graphic novel. After reading the play and the graphic novel, what did he remove? Does it change the story? Read This If You Loved: Romeo and Juliet by William Shakespeare, The Odyssey by Garth Hinds