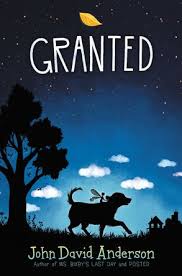 Summary: From the author of beloved novels Ms. Bixby’s Last Day and Posted comes a hilarious, heartfelt, and unforgettable novel about a fairy-in-training.

Everyone who wishes upon a star, or a candle, or a penny thrown into a fountain knows that you’re not allowed to tell anyone what you’ve wished for. But even so, there is someone out there who hears it.

In a magical land called the Haven lives a young fairy named Ophelia Delphinium Fidgets. Ophela is no ordinary fairy—she is a Granter: one of the select fairies whose job it is to venture out into the world and grant the wishes of unsuspecting humans every day.

It’s the work of the Granters that generates the magic that allows the fairies to do what they do, and to keep the Haven hidden and safe. But with worldwide magic levels at an all-time low, this is not as easy as it sounds. On a typical day, only a small fraction of the millions of potential wishes gets granted.

Today, however, is anything but typical. Because today, Ophelia is going to get her very first wish-granting assignment.

And she’s about to discover that figuring out how to truly give someone what they want takes much more than a handful of fairy dust. 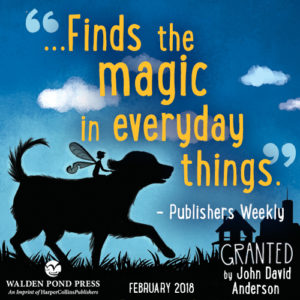 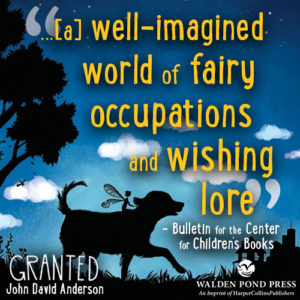 About the Author: John David Anderson is the author of Ms. Bixby’s Last Day, Posted, Sidekicked, Minion, and The Dungeoneers. A dedicated root beer connoisseur and chocolate fiend, he lives with his wife, two kids, and perpetually whiny cat in Indianapolis, Indiana. You can visit him online at www.johndavidanderson.org.

Review: John David Anderson never ceases to amaze me. I have read all but one of his books, and I am learning that I cannot even guess what he’s going to tackle next; although, I can assume he is going to do it well!

But I will be honest, I would not have guessed that his newest would be about a super sweet, determined, and a bit quirky fairy named Ophelia Fidgets. But yes, Ophelia is our phenomenal fairy protagonist who every reader will immediately love. She is a perfectionist but also does things her own way–she just has very high standards for her own way. She also has a silly sidekick in both Charlie, a fellow granting fairy, and Sam, a homeless dog, and I must say that Anderson does one of the best dog voices I’ve ever read, I could hear it while I read.

Other than the characters, I think there were two other things that this novel did exceptionally well: world building and making the reader think about priorities. Everywhere Ophelia went, Anderson described enough to make sure that we could visualize it, but he also ensured that he didn’t overwhelm the reader with too much information. He also did a truly fantastic job at setting up the fairy world and all the rules within it to where the reader understood Ophelia’s task, her job, etc. Also, through Ophelia’s journey to grant the wish she’s been assigned, Anderson gets the reader to look at wishing and what is truly important in the world.

Lastly, I loved that in the backmatter of the book, Anderson acknowledges the long history of fairies, including Tinkerbell!, and reminds readers to keep reading about them.

Teachers’ Tools for Navigation: Like all of Anderson’s books, I know this one will find readers on my shelves. This book is perfect for fans of fairy, animal, or quirky adventure books. And it will also be a wonderful read aloud! Even if you don’t have enough time to read the entire book, the first chapter and synopsis will truly suck readers in.

Flagged Passages: “The last time you blew out your birthday candles, what did you wish for?

Did you blot them all out on the first breath? It doesn’t count otherwise. Also, do not let your brother or sister help you; at best they will waste your wish. At worst they will steal it for themselves.

Same for dandelions–the one breathe rule–or else the wish won’t fly. It’s harder than you think, getting all those seeds off in one huff. Harder than candles on a cake. If you can’t manage it, though, don’t worry. There are a dozen more ways to make a wish. A quarter flipped into a fountain. A penny dropped down a well. Some might tell you that bigger coins make stronger wishes, but that’s simply not true. A silver dollar or even a gold doubloon doesn’t increase the chances you’ll get what you want. Your dollar is better spent on gumballs or ice cream; use a nickel instead. Wishes aren’t for sale to the highest bidder.” (p. 1-2)

And my favorite passage:

Ophelia stopped fidgeting with her petal and looked over at Sam. Of course he would think so. And she couldn’t blame him. Not after how he’d been treated. She leaned into him, nestling in his fur.

‘Maybe they’re not all bad,’ she amended. ‘They just lose sight of what’s important sometimes, worrying so much about what they don’t have that they forget what they’ve already got.’

**Thank you to Danielle at Blue Slip Media for setting up the blog tour!**