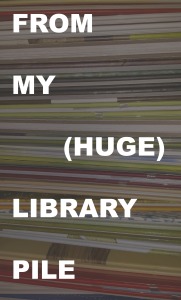 Because of It’s Monday! What Are You Reading? posts, I find myself often with huge piles of picture books from the library that were highly recommended by fellow bloggers. I celebrate many of the nonfiction pictures books on Wednesdays, but I want to share some of the fiction picture books I have enjoyed. So, I decided to start series here on UR where I can pass on the love for these books sporadically as I read them. Here is a list of some great pictures books that I’ve read recently from my huge library pile (part 11!). 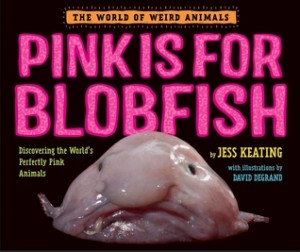 Some people think pink is a pretty color. A fluffy, sparkly, princess-y color. But it’s so much more.
Sure, pink is the color of princesses and bubblegum, but it’s also the color of monster slugs and poisonous insects. Not to mention ultra-intelligent dolphins, naked mole rats and bizarre, bloated blobfish.

Isn’t it about time to rethink pink?

Slip on your rose-colored glasses and take a walk on the wild side with zoologist Jess Keating, author of How to Outrun a Crocodile When Your Shoes Are Untied, and cartoonist David DeGrand.

My Thoughts:  I loved how Keating set up the book. The information that was included was fascinating, there were many text features that added interesting tidbits throughout, and there was some hilarity thrown in. Such a great read! I also was told that it is going to be a series, and that is such great news! 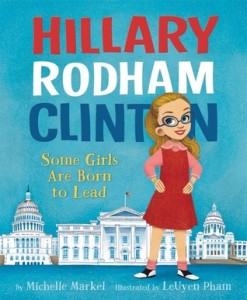 Goodreads Summary: In the spirit of Barack Obama: Son of Promise, Child of Hope andAmelia and Eleanor Go for a Ride comes an inspiring portrait of Hillary Rodham Clinton: a girl who fought to make a difference—and paved the way for women everywhere—from Michelle Markel and LeUyen Pham.

In the 1950s, it was a man’s world. Girls weren’t supposed to act smart, tough, or ambitious. Even though, deep inside, they may have felt that way. And then along came Hillary. Brave, brilliant, and unstoppable, she was out to change the world.

It didn’t matter what people said—she was born to lead.

With illustrations packed full of historical figures and details, this gorgeous and informative picture book biography is perfect for every budding leader. Includes a timeline, artist’s note, and bibliography.

My Thoughts:  Alyson Beecher shared with me that Pham did a tremendous amount of research for this book though she had no issues researching because Hillary is so fact-checked. I think the idea of how much research LeUyen did for this book is fascinating and is also evident in the book. I am also a huge fan of Pham’s illustrations (she does Princess in Black also), and it was so much fun to see Hillary being represented so brightly. I loved learning about Hillary’s journey to the current presidential race. Right now so much is focused on negativity, it is nice to see why she is such an inspirational woman. 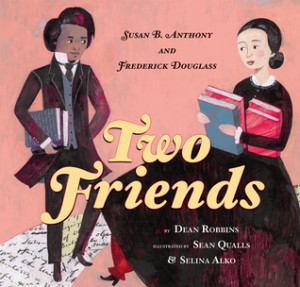 Goodreads Summary: Some people had rights, while others had none.
Why shouldn’t they have them, too?

Two friends, Susan B. Anthony and Frederick Douglass, get together for tea and conversation. They recount their similar stories fighting to win rights for women and African Americans. The premise of this particular exchange between the two is based on a statue in their hometown of Rochester, New York, which shows the two friends having tea.

My Thoughts: I loved learning about this friendship! I am a great admirer of both Anthony and Douglass; however, I did not know anything about the relationship they had. I love that they were both visionaries within two a civil rights movement though they also realized how their goals were connected, so they fought the prejudice together. Although I really would have loved this story to be longer to learn more about how they worked together, learning about their histories and imagining their tea party was a perfect way to introduce the friendship. I am also a huge fan of Qualls’s artwork, and I loved how this book incorporated his work with the written words of both reformers. 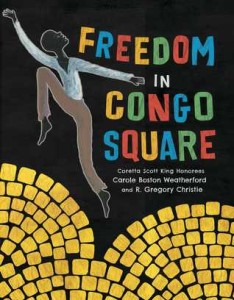 Mondays, there were hogs to slop,
mules to train, and logs to chop.
Slavery was no ways fair.
Six more days to Congo Square.

As slaves relentlessly toiled in an unjust system in 19th century Louisiana, they all counted down the days until Sunday, when at least for half a day they were briefly able to congregate in Congo Square in New Orleans. Here they were free to set up an open market, sing, dance, and play music. They were free to forget their cares, their struggles, and their oppression. This story chronicles slaves’ duties each day, from chopping logs on Mondays to baking bread on Wednesdays to plucking hens on Saturday, and builds to the freedom of Sundays and the special experience of an afternoon spent in Congo Square. This book will have a forward from Freddi Williams Evans (freddievans.com), a historian and Congo Square expert, as well as a glossary of terms with pronunciations and definitions.

My Thoughts:  I found this book to be touching and beautiful and sad. Books about slavery always make me so ashamed of our past, so they are hard to read yet so important. I think Weatherford’s story really captures the brutal conditions of slavery in the South but also the freedom that was felt on the one free day in Louisiana.  Also, I personally like rhyming couplets, so I thought it had a great sing-songy quality. And let’s not forget the illustrations. They are pieces of art. They could each be framed and put in a museum. 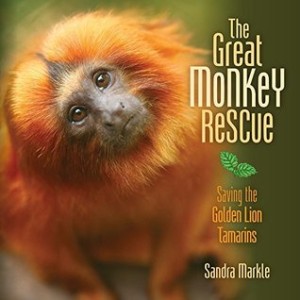 Goodreads Summary: Golden lion tamarins are found only in Brazilian forests. These small, remarkable monkeys once had plenty of space to roam and claim family territories. But years of deforestation caused their numbers to shrink. They were in serious danger of becoming extinct.

To help, scientists studied the animals in zoo settings. But they faced several mysteries. Why weren’t golden lion tamarins reproducing in zoos? If scientists reintroduced zoo-raised tamarins to the wild, would those monkeys survive? And how could scientists give tamarins enough forest area for the population to grow? Find out how scientists and concerned citizens worked together to give golden lion tamarins a hopeful future.

My Thoughts: It is always sad to learn about an endangered animal I didn’t know about before, this story was inspiring because it showed how a team working together could, and hopefully will continue, reverse the loss of a species. This book is so hopeful in that if we all work together to help save species that are struggling to survive. I really want to read more of Markle’s work now because she really is quite brilliant about turning information into narrative nonfiction.