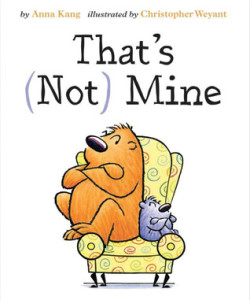 Goodreads Summary: Two fuzzy creatures both want to sit in the same comfy chair. The trouble is, they can’t agree who it belongs to. They get madder and madder, until…

With expressive illustrations and simple text, this giggle-inducing tale about (not) sharing and (not) being a good friend features the endearing characters from Theodor Seuss Geisel Award winner You Are (Not) Small.

Kellee’s Review: Our two fuzzy friends from You Are (Not) Small are at it again! Although they seem to be friends, every time we encounter them they seem to be having a disagreement that will definitely make their readers laugh. This text isn’t about identity and differences like the first text. Instead, it focuses more on sharing, friendship, wanting what others have, and also dealing with losing what you wanted. These are all really big (and tough!) lessons for kids. By sharing this book with your child or your class, it becomes a very entertaining way to talk about these issues and topics.

Ricki’s Review: About three days before I received this book in the mail, my husband and I were discussing our concerns with our son’s new affinity for the word: “mine.” Like most toddlers, he has become obsessed with the concept that everything is “mine” (and by “mine,” I mean his). We don’t support this new “anti-sharing” movement that has become a hot topic in parenting groups and blogs. We want to raise our son to understand that, yes, some things can be his, but he should work hard to share as much as he can with others. I want to raise him to value his peers, respect adults, and give back to his community. So when this book came in the mail, I was extremely pleased. I read it aloud as my husband listened. His response? “This is the perfect book for him right now.” These two fuzzy creatures are teaching my son a lot of great lessons—it is okay for him to be short (my son’s destiny), and in this new text, not everything has to be “mine.” I am looking forward to the next installation from this husband-and-wife duo!

Teachers’ Tools for Navigation: Curriculum guide for That’s (Not) Mine

Sharing is a concept that goes beyond childhood. Teachers might facilitate a discussion about the different ways that sharing can relate to many contexts and situations in life—for people of all ages.

Discussion Questions: Why did each of the characters want the others’ chair?; Who do you think won in the end?; What type of friends do you think the two characters are?; Have you ever thought you wanted something, but then didn’t really want it once you got it?

Read This If You Loved: You Are (Not) Small by Anna Kang, Lady Pancake and Sir French Toast by Josh Funk, Your Alien by Tammi Sauer, The Pigeon Needs a Bath by Mo Willems, Elephant and Piggie books by Mo Willems

Our inspiration behind the book:

The inspiration behind THAT’S (NOT) MINE was growing up with my brother. As anyone with siblings will attest, we were forced to learn to how share almost everything with each other—food, toys, attention, space, and in the days before computers and smart phones, whose turn it was to choose the television show or radio station. Sharing is tough, even for adults, and I must admit, I was not good at sharing with my brother (sorry, Emil). Lucky for me, he was a really kind older brother and let me have my way more often than I deserved (thank you, Emil). Now that I have two daughters, I see them battle over the same things. I’ve realized that for a child, possessions are precious—they shape their identity. My kids and their friends will say that the “best” part of their day was that they “got a turn” playing with a certain toy or reading a favorite book at school, or that they were “first to use the best swing,” etc. And conversely, they will report how devastated they were because they “didn’t get a turn” with a coveted item. It requires a certain amount of emotional maturity to see someone else’s perspective and to let go of an object you value.

How we work collaboratively:

Anna: I write something, Chris reads it, gives me notes, we discuss the notes, I rewrite it, we discuss it again, and then when we both like the text, we discuss the illustrations and visual style. Chris begins to sketch some ideas, I give him feedback, he revises, and we discuss them again, etc. It is a constant back-and-forth collaboration. I’m very fortunate to have him as a sounding board.

Chris: One of the things I like most about our collaborative process is the ongoing conversation Anna and I have as the book goes from early concept to final art. Along the way, we will discuss what’s working and what could be stronger, continually making changes, large and small, until we feel the book is what we envisioned. Many times we’ll have a quick talk while doing the dishes or in the car. It feels like a very natural process that has become a part of our everyday lives.

About the Authors: Husband-and-wife team Anna Kang and Christopher Weyant are the creators of You Are (Not) Small, which won the Theodor Seuss Geisel Award and was named a Notable Children’s Book by the American Library Association. They live in New Jersey with their two daughters, Kate and Lily, a guinea pig named Athena, and a hermit crab named Olaf.

Anna, a native New Yorker, grew up believing everything was hers until one day she realized it was her brother’s, too. She received a master’s degree in fine arts from the USC School of Cinematic Arts, where the visual storyteller in her was awakened, forever changing the way she saw art, life, and everything in between. In addition to writing, Anna loves to read, travel, laugh, eat, and nap. Visit her online at www.annakang.com.

Christopher is a cartoonist and illustrator. His work can regularly be seen in the New Yorker. His cartoons are syndicated worldwide and have been featured on the Today Show, Meet the Press, and World News Tonight. Christopher likes to share everything but his personal space on the subway. Visit him online at www.christopherweyant.com.

**Thank you to Barbara at Blue Slip Media for providing copies for review and to Anna and Chris for their guest post!!**

6 thoughts on “Review, Giveaway, and Author Guest Post! That’s (Not) Mine by Anna Kang, Illustrated by Christopher Weyant”