When I heard of Walter Dean Myers’s passing, tears immediately began flowing. As a reader, many of us feel close to authors when we read their books, but with Myers, it was more for me. He meant something to me, my students (past, present, and future), my fellow teachers, their students, and everyone else who ever touched one of his books.

I read my first Walter Dean Myers, Shooter, in May of 2007 during my Master’s year. I was blown away by the truth within his books and the way in which he could weave a story. Then I read Monster and was once again awed by the unique ways that he told his stories (interview, police report, etc.). I followed these two YA books with read 5 more of his YA (Handbook for Boys, Dope Sick, It Ain’t All For Nothing, Kick, and Fallen Angels), 1 middle grade (Autobiography of my Dead Brother), and 2 picture books (Harlem and Muhammad Ali). All brilliant. But what made these books even more special for me? They were books that my students wanted to read. They were easy sells. They grabbed their attention. They sucked them in. They were a reflection of people in their lives and themselves. And they were written so well. Even when I moved to teaching the most struggling readers in my school, I found that they gravitated towards Myers’s books even when the “reading level” was higher than theirs. Because of this, I began using an excerpt from Slam as a mentor text during a lesson. This brought even more of my students to his books. I also used Love that Dog by Sharon Creech during my poetry unit which has Walter Dean Myers as a character and uses one of his poems.  Because of Jack’s love of Myers, even more kids were interested in his work.  The demand for his books never stopped, so I kept buying his books. And lending his books. He was a constant presence in my room, and a presence that is irreplaceable. 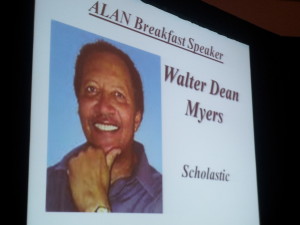 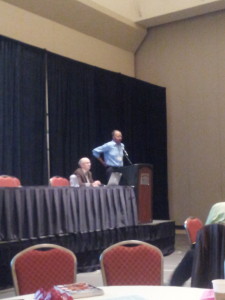 I’ve also been lucky enough to see him speak twice and meet him once. He was a true gentleman, advocate for literacy, and just had a way with words. In 2011, Myers spoke at ALAN and shared how writing was his passion, and he was lucky enough to have publishers that would let him do whatever he could pull off. MAN could he pull off some amazing things. In 2013, Myers was the ALAN breakfast speaker. His speech was about diversity (economic and race) and reading. He shared how he’d been going to prisons for over 20 years to speak to the youth there to promote literacy.  He reminded us that there are all types of children, and that “we need to acknowledge that these [diverse] kids exist,” and “you will save some lives by the choices of the books that you get into kids’ hands.” It was a speech that would make any person want to go out and change the world because we were listening to a person who had.

Walter Dean Myers was a gentle, kind man with a fiery spirit. He was committed to change and a strong advocate for young people. When I first met him, I was surprised by how soft-spoken he was. It became immediately clear that his words had power, and I listened very closely when he spoke. Even when the lines for his book signings were out of the door, he treated all of the people in the line as if they were the only ones who mattered. 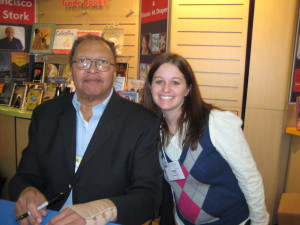 A few weeks ago, I was fortunate enough to receive his newest book, On a Clear Day in the mail. When a brown envelope comes, it is often a mystery about which book will be inside. When I pulled out the book and saw his name, I felt a rush of excitement.  I will read anything by this man. In this particular text, Myers strays from his norm and dapples in the dystopian genre. This does not surprise me because he has never been afraid to be innovative and break barriers.

I’ve been fortunate enough to teach Walter Dean Myers’ books, and any teacher who has used them in the classroom knows how powerful they can be for kids. My students have used Monster to debate the inequities of society, and they have learned about the devastation of war from Sunrise Over Fallujah. When I wrote a tribute to Myers on my Facebook page, a student posted about how much he treasures Fallen Angels because Myers’ military experience was very clear. His books are gripping, honest and gritty. These are the kind of books that help kids realize that they are readers.

Walter Dean Myers leaves behind a legacy of powerful books that will reach children for decades. He is truly a giant among men, and I’ve been honored to learn from him.

Walter Dean Myers’s will always be alive in his books,

3 thoughts on “A Tribute to Walter Dean Myers”