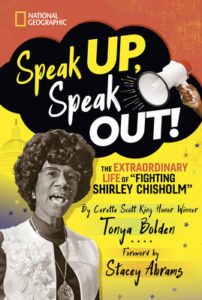 Before there was Barack Obama, before there was Kamala Harris, there was Fighting Shirley Chisholm. A daughter of Barbadian immigrants, Chisholm developed her political chops in Brooklyn in the 1950s and went on to become the first Black woman elected to the U.S. House of Representatives. This “pepper pot,” as she was known, was not afraid to speak up for what she thought was right. While fighting for a better life for her constituents in New York’s 12th Congressional District, Chisholm routinely fought against sexism and racism in her own life and defied the norms of the time. As the first Black woman in the House and the first Black woman to seek the presidential nomination from a major political party, Shirley Chisholm laid the groundwork for those who would come after her.

Extensively researched and reviewed by experts, this inspiring biography traces Chisholm’s journey from her childhood in a small flat in Brooklyn where she read books with her sisters to Brooklyn College where she got her first taste of politics. Readers will cheer Chisholm on to victory from the campaign trail to the hallowed halls of the U.S. Capitol, where she fought for fair wages, equal rights, and an end to the Vietnam War. And while the presidential campaign trail in 1972 did not end in victory, Shirley Chisholm shows us how you can change a country when you speak up and speak out.

Praise: “The strength of Bolden’s skill as a researcher is evident; chapter by chapter, she provides succinct but critical context around the motivations and movements of Chisholm’s political career. A foreword by Stacey Abrams helps establish that Chisholm’s legacy is one of political innovation as someone who forged a path for others to follow. This informative book has an engaging narrative structure. The use of repetition and inclusion of memorable pearls of wisdom attributed to Chisholm add a poetic tone. An insightful and focused profile of a political trailblazer.” —Kirkus Reviews

“This lively, detailed look at Chisholm’s personal and political life shines in its portrayal of a strong woman who never backed down; Bolden’s accessible text is great for report writers covering the groundbreaking Chisholm and the momentous time she lived in.” —Booklist

Review: Tonya Bolden’s biography of Shirley Chisholm is a perfect mix of historical remembrance as well as narrative structure to pull the reader in. You follow Shirley’s life as she goes against all odds and fights her way through politics, all while never losing her morals or remembrance of where she came from. As someone who knew of Chisholm but not specifics and boy, is she phenomenal! I highly recommend reading this book to learn more about this pioneer of civil and feminist rights.

Also, I read this book at the right time for me. As a Floridian going through an election, a reminder of hope is always needed. And Shirley Chisholm, her fight and success, and resilience shows that there have always been times to fight and there are always others that need to fight more.

Teachers’ Tools for Navigation: This biography will be perfect for updating nonfiction sections of libraries. Additionally, it would be a wonderful book club choice or lit circle choice when focusing on HERstory or true history.

School Library Journal, January 25, 2022: Speaking Up and Speaking Out with Tonya Bolden on Shirley Chisholm (Q&A) by Betsy Bird

YA Books Central, February 15, 2022: YABC Interview with Tonya Bolden about Speak Up, Speak Out! (Feb. 2022) (Author Interview) by Beth Edwards 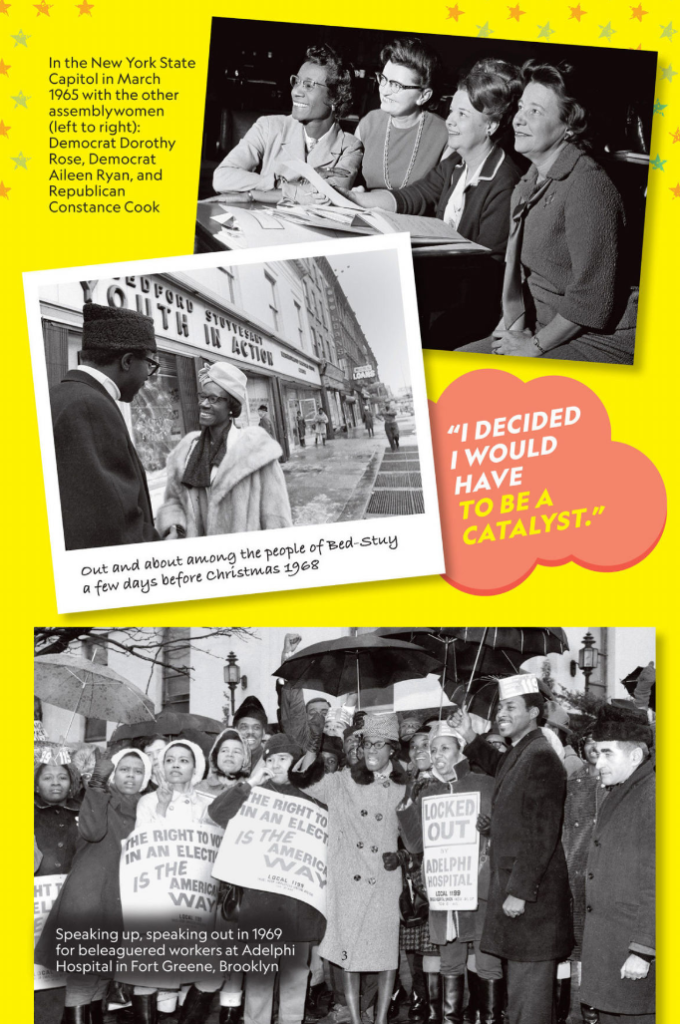 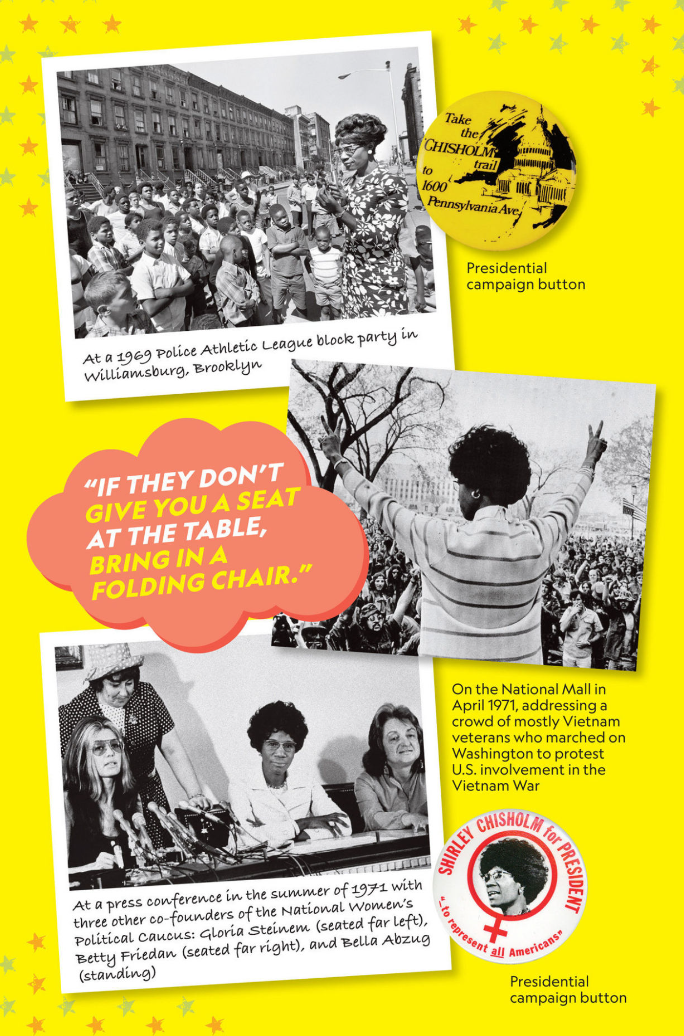 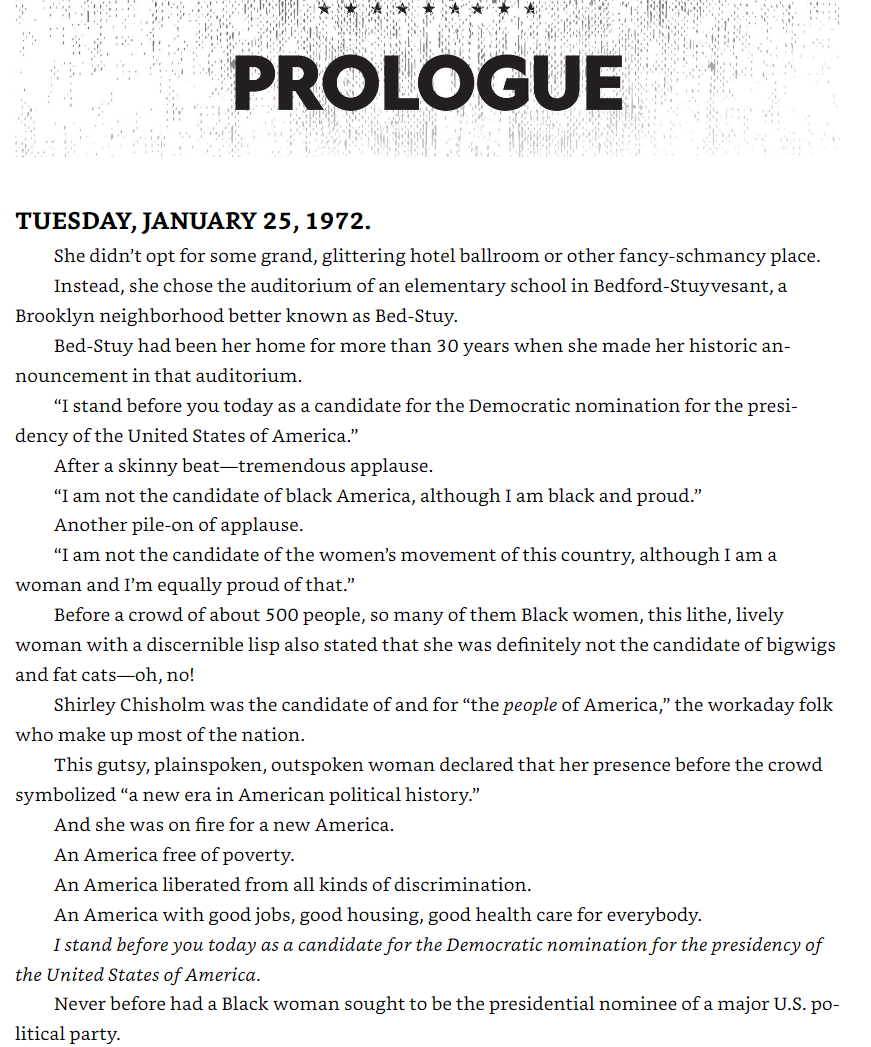 Read This If You Love: Narrative biographies

**Thank you to Media Masters Publicity for providing a copy for review!**

2 thoughts on “Speak Up, Speak Out! The Extraordinary Life of “Fighting Shirley Chisholm” by Tonya Bolden, Forward by Stacey Abrams”