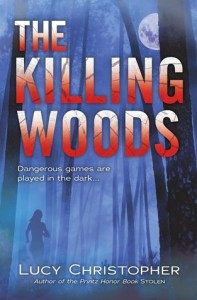 GoodReads Summary: Fatal attraction, primal fear, survival in the forest: From the author of the Printz Honor Book Stolen, the highly anticipated thriller about deadly games played in the dark.

Ashlee Parker is dead, and Emily Shepherd’s dad is accused of the crime. A former soldier suffering from PTSD, he emerges from the woods carrying the girl’s broken body. “Gone,” he says, then retreats into silence.

What really happened that wild night? Emily knows in her bones that her father is innocent — isn’t he? Before he’s convicted, she’s got to find out the truth. Does Damon Hilary, Ashlee’s charismatic boyfriend, have the answers? Or is he only playing games with her — the kinds of games that can kill?

Review: I absolutely loved Stolen, so I was thrilled to read another book by Lucy Christopher. This book reads more like a thriller. I was sucked into the mystery and very curious about how the plot would unravel. I think this book is most notable for the intricate descriptive details about the setting. I felt the dark coldness of the killing woods. The setting was spooky, which set the tone for the dark story. There are richly realized themes of friendship, family, and loyalty.

Teacher’s Tools for Navigation: Emily’s father suffers from PTSD. I think Lucy Christopher is delivering a message about PTSD, and it would be important for readers to think more about this. Students might find value in learning more about PTSD before, during, and after reading this book.

Discussion Questions: Why is everyone quick to blame Emily’s father? Do you think he is guilty?; What is The Game? What are the different roles that everyone plays in The Game? What does it teach us about this group of kids? Is it realistic and does it reflect people in general?

We Flagged: “I guess whoever built and buried that IED out there in the desert will never know how far that blast traveled. But all things ripple out, cause shrapnel.”

Read This If You Loved: Stolen by Lucy Christopher, The Body of Christopher Creed by Carol Plum-Ucci, Fight Club by Chuck Palahniuk, What Happened to Cass McBride by Gail Giles, The Things a Brother Knows by Dana Reinhardt, The Lovely Bones by Alice Sebold

**Thank you to NetGalley and Scholastic Chicken House for providing the Advanced Reader Copy for review!**

1 thought on “The Killing Woods by Lucy Christopher”