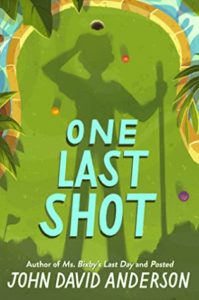 Summary: For as long as he can remember, Malcolm has never felt like he was good enough. Not for his parents, who have always seemed at odds with each other, with Malcolm caught in between. And especially not for his dad, whose competitive drive and love for sports Malcolm has never shared.

That is, until Malcolm discovers miniature golf, the one sport he actually enjoys. Maybe it’s the way in which every hole is a puzzle to be solved. Or the whimsy of the windmills and waterfalls that decorate the course. Or maybe it’s the slushies at the snack bar. But whatever the reason, something about mini golf just clicks for Malcolm. And best of all, it’s a sport his dad can’t possibly obsess over.

Or so Malcolm thinks.

Soon he is signed up for lessons and entered in tournaments. And yet, even as he becomes a better golfer and finds unexpected friends at the local course, be wonders if he might not always be a disappointment. But as the final match of the year draws closer, the tension between Malcolm’s parents reaches a breaking point, and it’s up to him to put the puzzle of his family back together again.

About the Author: John David Anderson is the author of some of the most beloved and highly acclaimed books for kids in recent memory, including the New York Times Notable Book Ms. Bixby’s Last Day, Granted, Sidekicked, and The Dungeoneers. A dedicated root beer connoisseur and chocolate fiend, he lives with his wonderful wife and two frawsome kids in Indianapolis, Indiana. He’s never eaten seven scoops of ice cream in a single sitting, but he thinks it sounds like a terrific idea. You can visit him online at www.johndavidanderson.org.

Q&A: Thank you so much to John David Anderson for answering these questions for us!

What was your inspiration for writing this novel?

One Last Shot is somewhat autobiographical in nature. As an adolescent once myself (so many eons ago) I can empathize with Malcolm’s (the protagonist’s) conflicts and concerns: the desire (or is it burden?) to please others, the need to find something you’re good at, anxiety over a potential parent split, the ache for a friend that just gets you—these are all feelings I struggled with as well. So think the emotional core of the book is definitely informed by my childhood.

At the same time, I literally just sat down one day and said, “I’m going to write a sports novel. Hold up…I don’t play sports! But I do play miniature golf. Wouldn’t it be cool if somebody—i.e. me–wrote a book about miniature golf and made it exactly eighteen chapters?” I think a lot of my stories start this way, as artistic challenges or experiments, though the real challenge is turning these exercises into full-fledged narratives.

Um…because it’s awesome! Honestly I picked mini-golf because it worked well as a metaphor for the coming-of-age story I was telling. On the one hand it’s so whimsical and random—windmills, barns, pirate ships—but at the same time its so methodical and predictable. It’s basic geometry. For Malcolm that’s appealing because it’s something he can control; it’s a problem with an easily discernable solution—the cup is right there. It’s also individualistic. Nobody is counting on him to catch the fly ball or safely get on base. His successes and failures are entirely his own—though that comes with its own pressures, of course.

Could you tell us some about your writing process?

Anyone who knows me already knows that chocolate is involved. Beyond that, though, it’s 6-8 weeks of pure writing fury followed by 6-8 months of torturous revision. My initial drafts are explorations—my editor says they are me laying out miles and miles of track hoping that it leads somewhere (it doesn’t always)— but the most important thing for me is to maintain momentum so I can push through the difficult middles to get to the rewarding ends. I just have to trust myself that the exhaustive revision process will bang all the pieces firmly into place, fashioning my mess of a first draft into something presentable.

I also have come to realize that the process never really stops. Even if I’m not in front of the laptop, I’m still writing. When I’m working on a novel my brain never fully steps out of that world. So much of the process happens in the ongoing dialogue I have with the characters inside my head (much like the voices Malcolm hears in his).

Of course this particular book afforded me the chance to do some fun hands-on research: I’ve visited my fair share of mini-golf courses in the last couple of years.

What is one thing you hope readers take away from ONE LAST SHOT?

The world is unpredictable. It throws obstacles at you right and left. You don’t get to make the course, you just have to play it.

But you also have more than one shot. Not everything is going to be a hole-in-one. You are going to doink off the rock or stick yourself in the corner or even hit it way too hard, somehow jump the wall and end up in the parking lot. But that’s okay. I want my readers to know its okay. You learn from your mistakes, and you take a better shot next time.

**Thank you to Walden Pond Press for providing the Q&A and a copy for giveaway!**

5 thoughts on “Blog Tour with Q&A and Readers’ Guide!: One Last Shot by John David Anderson”