“Digging into Fantasy and SciFi: An Anthropological Approach”

Like many authors, I came to writing via a circuitous route. A childhood obsession with The Lord of the Rings led to a fascination with history and other cultures, which led to an undergraduate degree in anthropology, which led to teaching 7th grade social studies, which led to writing middle grade and YA fantasy. See? Circuitous.

This is particularly true with my upcoming book, Del Toro Moon, a tale about a boy and his family—descendants of Spanish knights and aided by talking Andalusian war horses—who hunt monsters in the modern-day American Southwest. Del Toro Moon incorporates all my feels: fantasy, horses, the history and legends of the Southwest (I’m a proud New Mexican native now living in Colorado), and powerful familial bonds, especially between fathers and sons.

Since I write mostly fantasy, my school visits often focus on reading and writing in that very popular genre. One writing trick I share with upper elementary and middle/high school students is to have them scrutinize literary worlds as an anthropologist would—another cross-curriculum tool between literature and social studies.

I begin by reviewing the eight elements or universals found in all human cultures. I do include this caveat: if a group of people does not have all eight elements, then it is probably a social group, not a culture as an anthropologist would define it:

Next, the students divide into teams of two or three. Using a simple web graphic organizer (I’ve included an example—feel free to use it), each team takes apart a favorite book, movie, or TV show and determines if that book/movie/show/etc. has those eight elements. Some common favorites are:

The students must include a justification. For example, if a team is examining Star Wars and puts “Jedi” in the Religion circle, they must explain why they placed it there as opposed to History or Government.

Finally, I have them complete the same exercise with their own work-in-progress. This is also a useful tool to aid in plotting a story prior to writing the first draft. I’ve had some pretty amazing discussions during this activity. One of my favorite was a debate focused on whether information technology should be listed under “Tools” or “Religion.”

I’d enjoy hearing about other ways teachers and librarians are connecting various disciplines, especially between the humanities and STEM. Please share with me and thank you! 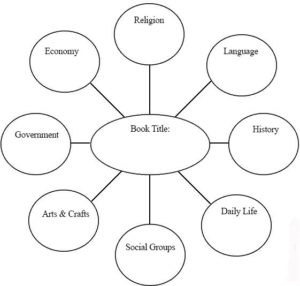 About the Author: Darby Karchut is a multi-award winning author, dreamer, and compulsive dawn greeter.  A proud native of New Mexico, she now lives in the foothills of the Rocky Mountains, where she runs in blizzards and bikes in lightning storms. When not dodging death by Colorado, Darby is busy at her writing desk. Her books include the best selling middle grade series: THE ADVENTURES OF FINN MacCULLEN. Best thing ever: her YA debut novel, GRIFFIN RISING, has been optioned for film. Her latest book, DEL TORO MOON, releases Fall 2018 from Owl Hollow Press. Visit the author at www.darbykarchut.com 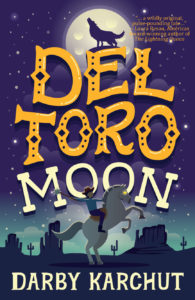 Summary: Bad enough Matt Del Toro is the greenest greenhorn in the family’s centuries-old business: riding down and destroying wolf-like creatures, known as skinners. He must also learn how to match his father’s skills at monster hunting. Odds of doing that? Yeah, about a million to one. Because Matt’s father is the legendary Javier Del Toro—hunter, scholar, and a true caballero: a gentleman of the horse.

Now, with the skinners multiplying, both in numbers and ferocity, Matt is desperate to keep his father and hot-tempered older brother from killing each other, prevent his new friend, Perry—a horse-crazy girl who recently moved to their small town of Huerfano, Colorado—from discovering the true nature of his odder-than-oddball family, and save a group of paleontologists from getting skinner-ed.

Luckily, Matt has twelve hundred pounds of backup in his best friend—El Cid, an Andalusian war stallion with the ability of human speech, more fighting savvy than a medieval knight, and a heart as big and steadfast as the Rocky Mountains.

Those skinners don’t stand a chance.

Thank you Darby for sharing this look at writing from a cross-curricular viewpoint!