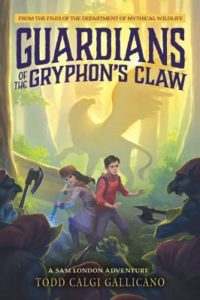 Summary: A new action adventure series set in our famous national parks! Enter the world of the Department of Mythical Wildlife, where our protagonist, Sam London, is tasked with protecting legendary animals that secretly live amongst our treasured wildlife.

Haunted by a dream of a mythical gryphon, Sam London uncovers an ancient secret that will change the way he sees the world forever. Recruited by Dr. Vance Vantana, an eccentric zoologist and park ranger sent by the government, Sam is whisked away on an adventure that takes him to the farthest reaches of the globe. Along this journey, Sam learns an incredible truth: mythical creatures are real and living among us in our national parks. A special department in the U.S. government ensures that their existence remains hidden.

But Sam’s dream is an omen that the secret may now be in danger. Someone seeks the power to expose these creatures and overthrow humankind–and that power can only be found in a magical talisman known as the gryphon’s claw.

“A fun-filled start to a series that is sure to keep lovers of Rick Riordan running to the shelves.”-SLJ

“A death-defying, globe-spanning adventure, packed with creatures out of folklore and myth….[Guardians of the Gryphon’s Claw is] a solid series opener and debut for Gallicano, who stocks his story with engaging characters, human, and otherwise.”-Publishers Weekly

Review: I could not stop raving about this book as I read it! I tweeted about it, talked to everyone I saw about it, and even mentioned in a couple of IMWAYR posts. You know why? Because it is so much fun, the plot is so well-crafted, and finally my fans of Riordan’s mythological adventures are going to finally have a book that they’re going to love has much as his books. However, I don’t want you to think this is a Riordan copy-cat. It is a totally unique adventure with mythical creatures. I loved the combination of mythologies from different cultures, humor!, the new explanation of mythical creatures living with us yet hidden among us, and the inclusion of national parks in Sam’s story.

Teachers’ Tools for Navigation: Guardians of the Gryphon’s Claw will be a perfect new addition to mythology units in middle school to share along side Percy Jackson and other Riordan words. Gallicano even included a glossary of the mythical creatures that will be a wonderful asset to classrooms. However, I feel that primarily the book will be found in students’ hands.

Flagged Passages: “The flapping of the creature’s massive wings sent up a swirling column of dust that blanketed the plateau and rose hundreds of feet into the air. In Death Valley, these whirlwinds of dirt were often called sand augers — twisting, dust-filled tornados that fed off the desert floor as they moved across the landscape. Sam had forgotten about this part of the dream and closed his eyes and covered his mouth a moment too late. When he heard the wings slow and felt the haze begin to settle, he cautiously opened his eyes. They instantly stung from the dissipating cloud of dust, and he coughed as particles of desert sand forced their way into his throat. But it was all suddenly worth it–the stinging, the coughing, the lying, the possible grounding for eternity–for what he saw standing before him was truly extraordinary. Phylassos had returned.”

Read This If You Love: Mythology, Mythical Creatures, Adventure

**Thank you to Random House Children’s Books for providing a copy for review!**