A long time ago, in this galaxy and not so far away, I was in an English class. My teacher returned my paper and there was a blue ninety-nine scribbled on the top corner. I looked over my work to see where I lost that one point, and found no marks, no grammatical mistakes, no misspelled words. So, of course, I asked about it.

My teacher raised her brows and told me, “Writing can’t be perfect.”

Well. Isn’t that the entire problem right there? If writing is never perfect, when is it good enough?

After working on my debut novel Villain Keeper, I found that it was good enough for the publisher after three content edits, one copy edit, and at least one proof pages pass. And these by no means were the first revisions I’d done.

When my agent first sold the book series to HarperCollins, I’d already revised book one myself over and over again. Also, my critique partners (from here on known as my mom and my sister) had made suggestions and my agent had given me feedback, all of which I’d applied.

What surprised me the most, however, was how much better the book became after listening to each person’s (my mom’s, my sister’s, my agent’s, my editor’s) critiques, reading their comments, and thinking – with as open a mind as possible – about those editorial suggestions.

Somewhere in the midst of all these revisions, my manuscript got in pretty good shape. I was proud of it at least. It still benefited from additional revisions.

This has changed the way I view criticism. Instead of thinking of it as censure, I think of it as analysis. It’s not meant to condemn my work, it’s meant to benefit it.

There is this phrase I see on writing sites sometimes:

Give yourself permission to write badly.

Or, as I prefer it, Give yourself permission to write not good – at least at first.

It helps me when I get stuck. I remind myself it’s alright for things not to be perfect. I’ve got to start somewhere. Write something down. Practice. Revise. Get feedback. Then write some more. I try not to put the pressure of instant perfection on myself. It’s counterproductive. The idea is to first get something written.

Nora Roberts once said, “I can fix a bad page, I can’t fix a blank one.” She’s written over two hundred books in thirty years. That’s an astounding six to seven novels per year.  She’s a NY Times bestselling author. She still has to give herself permission to write bad pages and fix them.

When it comes to fixing pages, I’ve probably applied about ninety percent of feedback I’ve received on my writing. But not all criticisms are equal.

With my mom and sister, my agent, and my editor, the criticism I’ve gotten has been overwhelmingly wonderful. Writing is subjective, though. Occasionally, I don’t agree with them. When that happens, I make myself consider their opinion as carefully as possible. Sometimes, I decide they’re right. Their suggestion is better than what I have. Other times, I decide they’re not, and that’s okay.

When I see the results of applying those analyses and suggestions, I’m wowed. And appreciative. It’s probably important to note, giving good feedback is hard work, too.

I’m also a teacher. I’ve taught some combination of biology, chemistry, and math for the last ten years. Many of my students are like I was. They don’t want a mark of ninety-nine. They want a perfect hundred. They often don’t want to revise, either. And I understand. It’s almost like they think if it needs improvement, it’s a failure. Or, if they think it’s good already, it can’t be improved.

But I think it’s a better idea to think of writing not in terms of ‘good’ and ‘bad’, but it terms of a ‘work-in-progress’.  The goal isn’t to hit perfection. It’s to hone skills. Improve. And criticism and revision are essential. They are part of the process. Once I’ve been over the same piece of work many times, there comes a point where I decide I’m happy with it, and move on to the next thing.

I just finished editing the second book Quest Maker in my series. I went through several rounds of feedback and revisions on it as well. I hope, and believe, my skills keep improving. I’m happy with book two, too.

Besides, there is something wonderful about always having room for improvement, always having something to strive for. Who knows? Maybe that was what my English teacher was trying to tell me way back when with that blue ninety-nine. 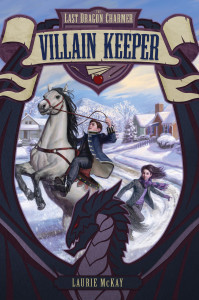 Villain Keeper Summary: All his life, Prince Caden has dreamed of slaying a dragon. But before he has the chance, he is ripped from his home in the Great Winterlands of Razzon and finds himself in Asheville, North Carolina—a land with no magic and no dragons.

Or so he thinks. The longer Caden spends in Asheville, the more he comes to realize that there is unexpected and dangerous magic in this strange land. There just may be dragons here, too. But what if Caden’s destiny isn’t to slay a dragon, after all? 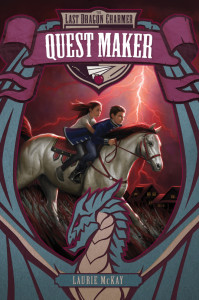 About the Author: Laurie McKay is an author and biology instructor who lives in Durham, NC. When she’s not working, she spends time with her family and her two elderly dogs. Her debut MG fantasy novel, VILLAIN KEEPER (The Last Dragon Charmer #1), is available now, and her second book QUEST MAKER (The Last Dragon Charmer #2) will be available Feb. 2, 2016. To learn more about her or to see pictures of her dogs (and her family) follow her at lauriemckay.net or on Twitter or Facebook. You can find her book at Goodreads, Indiebound, Amazon, BN, and wherever books are sold.

Thank you so much to Laurie for her reflections on revision and critique! Such a great lesson for students (and adult writers!)