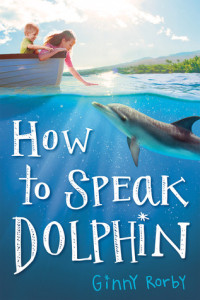 Goodreads Summary: Schneider Family Book Award-winning author Ginny Rorby has created an irresistible dolphin story about a girl’s struggle to help her autistic brother and herself.

Lily loves her half-brother, Adam, but she has always struggled with him, too. He’s definitely on the autism spectrum–though her step-father, Don, can barely bring himself to admit it–and caring for him has forced Lily to become as much mother as sister. All Lily wants is for her step-father to acknowledge that Adam has a real issue, that they need to find some kind of program that can help him. Then maybe she can have a life of her own.

Adam’s always loved dolphins, so when Don, an oncologist, hears about a young dolphin with cancer, he offers to help. He brings Lily and Adam along, and Adam and the dolphin–Nori–bond instantly.

But though Lily sees how much Adam loves Nori, she also sees that the dolphin shouldn’t spend the rest of her life in captivity, away from her family. Can Adam find real help somewhere else? And can Lily help Nori regain her freedom without betraying her family?

My Review: How to Speak Dolphin is a tale that looks at the struggles and triumphs of growing up with an autistic family member. Lily has lost her mom and is still mourning when we meet her, yet she is being expected to pretty much be her brother Adam’s caretaker. Because of this, Lily has very few friends and finds herself lonely and sad often. Her stepfather is lost in fantasy thinking that Adam is less work and less autistic than he really is. Lily is lost and tired though knows something needs to be done. She just wants her brother to be taken care of correctly, and she needs her stepfather to see it as well. It is through Lily’s guiding, and a bit of help from Adam’s new caretaker Suzanne, that Don finally seeks getting treatment for Adam through DAT, dolphin-assisted therapy, with a young dolphin named Nori recovering from cancer. During Lily’s journey through helping her brother (and herself), she becomes friends with Zoe, a young girl who lost her sight due to retinoblastoma, who also helps her realize that her life may not be what she’d expected, but it can still be good. This book, like all of Ginny’s, is quite a ride and makes the reader think about animal and human issues that are often ignored. Ginny Rorby has done it again.

Teachers’ Tools For Navigation: There are many books that look at autism or animal rights. I can definitely see this book being in a lit circle set (with the titles listed below) where students in groups can each read a book about the topic then share what they have learned from their book at the end. This could be done beautifully with most of Ginny’s titles (Hurt Go Happy, Outside of a Horse, and Dolphin Sky) because they each look at a human and animal struggle. Additionally, this book is going to be loved by students who love Rules, Out of My Mind, Wonder, and other books that look at overcoming differences.

I could also see inquiry projects blossoming out of the lit circles or a whole-class read of How to Speak Dolphin. In Dolphin alone, students could find themselves questioning animal captivity, DAT, autism, retinoblastoma, sign language, oil spill, and more.

Discussion Questions: Do you agree with the choice that is made with Nori at the end of the book?; Zoe was quite pushy with Lily when they disagree. Do you agree with how Zoe dealt with the situation?; Do you think it was Lily’s responsibility to care for Adam after her mother died?; Practice walking using echoing like Zoe does. How easy/hard is it?; Zoe is a very positive person. How does how she is dealing with her blindness help Lily be more optimistic about Adam and her life?; Why do you think Don had such a hard time admitting to himself that Adam may need help outside what he and Lily could give?

We Flagged: “Don holds Adam pressed to his chest, one arm around his legs and the other pinning his arms to his sides as I test the water temerature and start filling the tub. Don’s eyes are closed. I think from the pain of Adam’s screaming in his ear, but decided maybe it’s because his heart is broken. I was seven and a half when Mom and Don found out she was pregnant and that the baby would be a boy. Don was so over-the-top thrilled that Mom looked at me and said she’d wanted another girl. She was trying to make sure my feelings weren’t hurt, but it made me wonder if my real father had wished fora  boy, too.” (p. 8)

15 thoughts on “How To Speak Dolphin by Ginny Rorby”