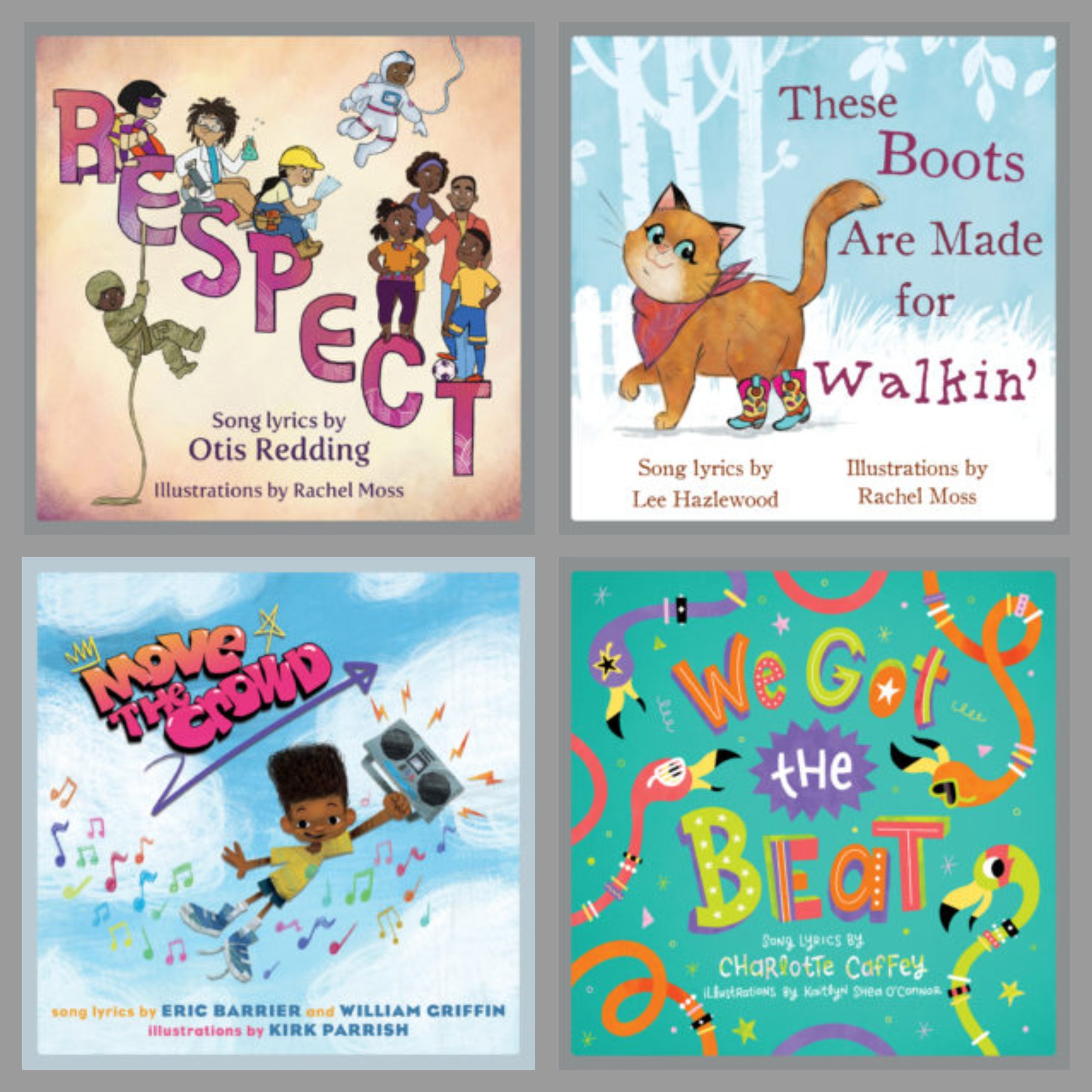 Respect Summary: Respect is a children’s picture book based on lyrics written and originally recorded by Otis Redding in 1965. Aretha Franklin’s iconic rendition of the song later peaked at #1 on Billboard’s Hot 100 in 1967. Redding’s lyrics continue to resonate with listeners today.

With lyrics by Otis Redding and illustrations by Rachel Moss, this irresistible book shows a young girl, her brother, and her parents conjuring as many positive futures for each other as they can dream. Packed with playful vignettes as they imagine a life full of possibility, Respect provides families an opportunity to explore themes of mutual respect—while revisiting one of the greatest songs ever written.

With lyrics by Lee Hazlewood and illustrations by Rachel Moss, this captivating picture book tells the story of a boy and his extremely attached and very jealous cat who must adapt to the introduction of a new family member—a puppy. The funny story line and delightful images are sure to have the entire family curled up and laughing together, pets included!

Move the Crowd Summary: Innovative illustrator Kirk Parrish brings the iconic song “Move the Crowd” to life for the first time as a children’s picture book. The lyrics to Eric B. and Rakim’s hit song provide the inspiration for this instant classic.

Follow along as Parrish pairs the lyrics with colorful illustrations about a boy being absorbed into his stereo and dropped into a colorless world where the music is dull and the people uninspired. The ensuing transformation he brings to the crowd with his music is one that the whole family can enjoy together.

We Got the Beat Summary: We Got the Beat is a children’s picture book based on the hit song by the 1980s new wave group the Go-Go’s. Consisting of five members, the all-female band rocked the nation with their charisma and musical genius. Their hit song “We Got the Beat” spent three weeks at #2 on the Billboard 100 and became their signature song. Says the New York Times: the Go-Go’s “taught a new generation the power of the girl gang.”

With lyrics by Go-Go’s member Charlotte Caffey and illustrations by Kaitlyn Shea O’Connor, this picture book tells the story of what it is like to live life dancing to the beat, while enjoying friends, nature, and the fun that surrounds you. We Got the Beat will make both parents and children get their groove on and show off their best dance moves.

Review and Teachers’ Tools for Navigation: These four additions to this series are just as good as the original four; I hope the company keeps creating these as they are a great addition to picture books! Just like the first four, Trent is addicted to listening to these songs and following along in the picture book. I love hearing him in the other room put on the song knowing that he is falling in love with the music, the lyrics, and the book all at once!

There are so many different ways to use these picture books in the classroom. In my post about the first four in the series, I shared the idea to break students up into groups and listen to the songs that have LyricPop books then create their own picture book followed by a comparison/contrast with the LyricPop books. Also, I shared the idea to have students read the lyrics first without listening to the song and create a book. Then, after listening to the song, ask how they would change their book.

I also think that lyrics are a wonderful way to teach poetry which gives a great reason to include LyricPop books in secondary classrooms as well.

Read This If You Love: Music

**Thank you to Akashic Books for providing copies of these books for review!**

2 thoughts on “LyricPop is Back with Respect, These Boots Were Made for Walkin’, Move the Crowd, and We Got the Beat”