“Studying the Past, Writing the Future: Some Thoughts on the Study of History”

Before I even finished co-writing Roses and Radicals: The Epic Story of How American Women Won the Right to Vote (Viking, 2018), I knew I wanted to write another book like it.  By “like it” mean:

A book of history for younger readers.

It took me many months, many long walks, and many conversations with many people before I stumbled upon the subject of nonviolence.  As had been the case with suffrage a few years before, I knew next to nothing about this topic, but as I began reading my way into it, I could tell that it would make for a great book.

There was a more specific link connecting the two projects as well: Alice Paul, who led the American women’s suffrage movement during the final decade of its long struggle.  I had grown utterly fascinated with the intense, truly radical, and somewhat mysterious Paul while working on Roses and Radicals.  As I began reading about nonviolence I came to understand that she herself was a nonviolent activist, even though only a tiny fraction of the scholarship about Paul views her work in this context.  So the writing of my book, We Are Power: How Nonviolent Activism Changes the World, would begin by retelling her story, yet again, but this time in order to establish her rightful place alongside Gandhi, MLK, and Cesar Chavez.

But as I did this, I learned that We Are Power would be crucially different than Roses and Radicals.  For one thing, it would tell more stories—and would thus require considerably more research.  More important, however, these stories would be tied together not by a common set of characters, a single movement, or a shared setting, but by the strategy of nonviolent activism itself.

In this regard, We Are Power is not only a book of history, but a book of political theory, or, more precisely, a book about a half-dozen instances of this political theory being put into dramatic, inspiring practice.  The book, as narrative, would be propelled by characters and conflicts, but the spine holding it all together would be the theory itself: the way nonviolence rethinks the very nature of political power and social change.

Unfortunately, I found this theoretical material, all on its own, dense, abstract, and, when read separately from the history, extremely dry and perhaps even boring.  I knew that the parts of my book dedicated directly to this theory would have to be brief or I’d lose my readers.  And yet, these parts, I learned as I wrote my various chapters, were in a sense the very point of the book.  As they were interwoven into the various narratives I was constructing, they often found their place in and around the climaxes to each story.

The historical events were, I realized, the occasion to present the timeless truths at the center of nonviolent activism.  This would explain why the title to my book of history—We Are Power: How Nonviolent Activism Changes the World—contains not one but two present tense verbs.  It also explains why the book is able to pivot, in its conclusion, from past movements to a present struggle—the fight against climate change—that is very much ongoing.

I don’t have a lesson, per se, to offer teachers here, but instead a rather large bit of advice I encourage teachers to keep in mind when working on history with their students: studying the past is worthwhile not because there’s value in knowing, all by itself, what happened in earlier times, but because understanding history helps us see our present more clearly.  This great, meta-historical truth needn’t receive a lot of attention in lessons, but it should be there, I believe, as an often-silent motivation for the entire enterprise.

Our responsibility to study the past is inseparable from our responsibility to apply what we learn to our actions in the present.  When we teach young people history, we’re giving them a crucial tool in becoming informed citizens capable of transforming our present into a better future, and I can think of no lesson more important than that. 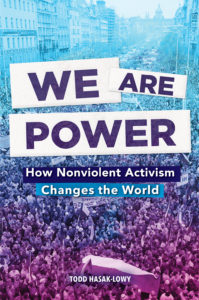 About the Book: Author Todd Hasak-Lowy’s We Are Power is a stirring introduction to nonviolent activism, from American women’s suffrage to civil rights to the global climate change movement.

What is nonviolent resistance? How does it work? In an age when armies are stronger than ever before, when guns seem to be everywhere, how can people confront their adversaries without resorting to violence themselves? Featuring leaders Gandhi, Alice Paul, Martin Luther King Jr., Cesar Chavez, Václav Havel, and Greta Thunberg, We Are Power brings to life the incredible movements that use nonviolent activism to change the world.

By answering the question “Why nonviolence?” and challenging the notion of who makes history and how, author Todd Hasak-Lowy shows the ways key movements have succeeded again and again in all sorts of places, using a variety of methods and against overwhelming odds. Breaking down nonviolent resistance into digestible lessons for next generation of activists, this book is an inspiring call to action, a reminder that true power ultimately rests in our hands.

We Are Power also includes an overview of other movements from the last one hundred years, a bibliography, and an index.

★ “Hasak-Lowy’s writing gives life to both the people and issues involved, taking time to explain historical backgrounds and the ways the lessons from one movement affected future ones.” — Booklist, STARRED REVIEW

★ “Highly recommended for its outstanding treatment of the history of social justice. A good resource for student activists.” — School Library Journal, STARRED REVIEW

★ “There has never been a time when a book is more relevant than this one.” — School Library Connection, STARRED REVIEW

“This excellent, timely overview will open eyes and deserves a wide readership.”— Kirkus 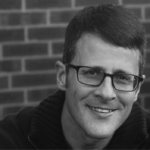 About the Author: Todd Hasak-Lowy is the author of several books for young readers, including the novels 33 Minutes and Me Being Me Is Exactly as Insane as You Being You. He is a professor in the department of liberal arts at the School of the Art Institute of Chicago and has a PhD from University of California, Berkeley. He lives in Evanston, Illinois, with his wife and two daughters. Visit his website at toddhasaklowy.com.

Thank you, Todd, for this look at how history helps write the future: good and bad!