“The Importance of a Diverse Cast of Characters”

One of the lessons most writers learn early in their careers is to write what you know. This is generally good advice, since understanding a place or a topic or an emotion makes it much easier to write something that sounds real on the page. The rule is not, of course, meant to be taken completely literally. Fiction is, by definition, made up. Having spent time in one city, it isn’t a huge stretch to place a story in a city one hasn’t visited. If you understand what it feels like to be scared or excited you can believably expand that experience to portray the emotional impact of say, being kidnapped or winning the lottery without suffering (or enjoying) that fate yourself. But how does “write what you know” apply when we’re talking about characters with different cultural backgrounds than their authors?

Diversity in books has become a hotly debated topic in recent years and for good reason. Too many readers feel alienated because an overwhelming percentage of books on the shelves are about exclusively white, middle class, straight characters. This limited perspective doesn’t just alienate people who don’t fit this narrow profile, it is a lost opportunities for everyone as books are an ideal way for people to immerse themselves in other cultures and life experiences. The challenge for an author is how to accurately create diversity when that is not “what we know.” It’s a challenge that must be approached with care. Getting the neighborhoods wrong when your character wanders the streets of Chicago is mildly annoying; using a stereotype to show a teenager is gay or African American is both damaging and offensive.

So what is an author to do? I am a white, middle class, woman who has mostly lived in cities. I don’t feel confident about accurately portraying the life experience of someone in a poor rural community who faces racism on a regular basis. What I can do is create a world for my characters that is not solely populated by white, middle class people, and I can do that with confidence because the world I live in is chock full of people from every background, shape, and color. Basically, I can follow the rule to write what you know while adding this important corollary: pay attention. I set REWIND in my hometown, so to make the scenes feel realistic, I had to pay attention to the people I actually see every day. Who passes me on the street when I head to work? Where is my grocery store clerk from? What kinds of accents do I overhear when eating out at a restaurant? Writing a multicultural community is not only the “right thing to do,” it is also the accurate thing to do.

In REWIND I have to admit to a little bit of a cheat. The teenage protagonists in the novel are orphaned and have been raised their entire lives in an Institutional Center. This set-up allowed me to include characters of various races without having to portray multiple cultures. Or, what is probably more accurate, I could place them all in my own culture without that feeling false within the context of the story. My first person point-of-view character is white, but other characters in the book are not. (I looked up census data and matched the ethnicity of the remaining teenagers—all of whom share a random genetic trait—to the reported census distribution in order to accurately reflect the region.) I did sometimes mention someone’s race as part of a character description, but tried to add that detail to white characters as often as I did with minority ones, in hopes that “white” wouldn’t be the assumed default just because no race is mentioned.

Diversity in book is more than just having an international cast. One of my fears as a writer is that I inadvertently typecast a character. My efforts to avoid this have focused on another fundamental lesson for good writing: descriptions are strongest when they also illuminate something about the book’s world or about the character doing the describing. Saying “the Hispanic teacher handed out our assignments” does not create a compelling scene in part because real people are never defined solely by their ethnicity or sexuality or any other single factor. Writing a scene where our hero is at his friend Manuel’s family restaurant and Manuel is mocking his attempts to pronounce the Spanish words on the menu tells me something about Manuel as a person and his relationship with our hero. Having a non-Asian character step into an Asian grocery store and not be able to read the packing nor understand the people around her could be a great way to show her feelings of alienation. Like real people, characters should stand out as unique and multi-faceted. My hope is that by placing three-dimensional characters in a variety of realistic settings, a greater breadth of readers will feel at home in my novels.

I know that including a diverse cast in a book with a white point-of-view character is not the same thing as creating truly inclusive literature. In a better world, there will be more published authors who are able to represent the life experiences of underrepresented people with nuance and understanding. REWIND is my debut novel. As a writer, I am still exploring ways to better incorporate diversity. As a reader, I encourage all of us to seek variety in our reading choices, both to support those voices that sometimes struggle to be heard and to enrich our own life by learning what it feels like to be someone else. This is not because reading widely is a politically correct imperative—immersion in a wide array of experiences is the gift we give ourselves when we sit down to read a good book.

Thank you so much to Carolyn for this IMPORTANT post and for being willing to chat about diversity with us! 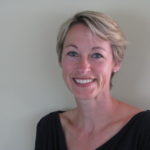 About the Author: Carolyn O’Doherty lives in a much prettier and less dangerous version of Portland than her characters. She’s loved writing and books her whole life, but ventured into novel writing late. In 2011 she received an MFA (Master of Fine Arts) in Creative Writing from Stonecoast. When, as a kid, she dreamed up the idea of freezing time, she only considered the benefits: always having the perfect snappy come-back, the right answer on the test, untraceable revenge. It was when she turned the idea into a novel that she delved into the dark side of this potential blessing.  Outside of writing, Carolyn has spent the last twenty years working with Portland non-profits to develop affordable housing.

Make sure to checkout her debut novel:

Summary: [April 10th, 2018 by Boyds Mills Press] Sixteen-year-old Alex is a Spinner–she has the ability to rewind time to review past events. Hated and feared because of their ability to find the truth, the small population of Spinners is restricted to Centers–compounds created to house and protect them. Alex’s society uses the Spinners’ skills to solve major crimes, but messing with time comes with consequences: no Spinner lives past the age of twenty. At sixteen, Alex is in her prime–until time sickness strikes early. When she is offered an experimental treatment, Alex sees a future for herself for the first time. But the promising medication offers more than just a cure–it also brings with it dire consequences.

Don’t miss out on the other stops on the Rewind blog tour:

And make sure to enter the Rewind giveaway!

Thank you again to Carolyn and Boyds Mills Press for hosting the Rewind blog tour!

For more advice to writers about including diversity into your work, visit https://diversebooks.org/resources/resources-for-writers/.

3 thoughts on “Blog Tour with Author Guest Post and Giveaway!: “The Importance of a Diverse Cast of Characters” by Carolyn O’Doherty, Author of Rewind”