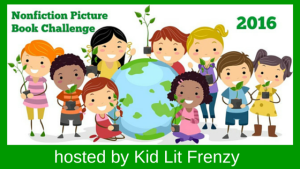 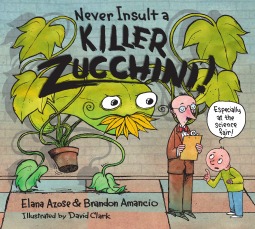 Goodreads Summary: This is one science fair you’ll never forget!

When Mr. Farnsworth, the science-fair judge, declares that he loves zucchinis, the Killer Zucchini is smitten. As the judge makes his way through the exhibits alphabetically—A (antimatter), B (bionic limb), C (cloning)—the Killer Zucchini tries to show his affection. But when Mr. F gets to K and admits he likes to eat zucchini with ranch dressing, the Killer Zucchini gets steamed and attempts to exact his revenge on the snack-loving judge using the other science-fair projects as his means to an end.

Hilarious havoc ensues as the entire science fair is destroyed by his wrath.

Engaging backmatter provides the science behind the science fair entries created by the characters in the story.

Review: My favorite part of this book isn’t even the Killer Zucchini found in the title but all of the supporting science fair experiments. While they all seem like mad science, in the back of the book, the authors have back matter explaining how each of the science fair experiments are based on real science. For example, even though Killer Zucchinis aren’t real, carnivorous plants are, a laser that erased ink was invented in 1968, and Florida’s Mag Lab can shrink a quarter!

Teachers’ Tools for Navigation: What a great STEM resource! This text will be a perfect read aloud and science text before starting science fair experiments. It can get the brain turning and even give some ideas (though some are quite extreme science!). Hopefully your science fair will not end up anything like this one though!

You could also have students choose one of the experiments to learn more about instead of reading the back matter. It would be a good science/language arts cross curricular research assignment.  (The book is also in alphabetical order!)

Read This If You Loved: Science texts and picture books

**Thank you to Elana for providing a copy of the text for review!**