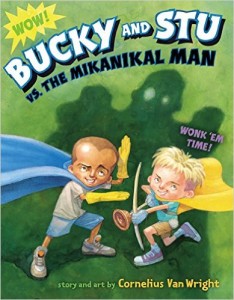 Goodreads Summary: It’s the adventure of a lifetime when best friends—and self-proclaimed superheroes—defeat bad guys of their own invention.

It’s wonk ’em time when Bucky and Stu have to stand up to Phat Tyre, TrashMan and Hose-Nose. No matter that the bad guys are all made out of household items that Bucky and Stu have assembled themselves—these bad guys don’t stand a chance against the boys’ power moves. Still, it’s quite a surprise when their latest villain, the giant Mikanikal Man, gets zapped during a lightning storm and comes to life! The battle—and thrill—of a lifetime ensue. Full of surprises and laughs, this upbeat, action-packed story celebrates imagination, creativity, and friendship in even the most unexpected forms. Cornelius Van Wright’s hilarious illustrations are full of surprises and are perfect for portraying the high-speed antics of two enthusiastic boys.

Cornelius Van Wright (www.corneliusvanwright.com) wrote and illustrated When an Alien Meets a Swamp Monster, and has also illustrated several other picture books, including Princess Grace (by Mary Hoffman) and Jingle Dancer (by Cynthia Leitich Smith). His work has appeared on Reading Rainbow and Storytime and has been exhibited with the Society of Illustrators. He lives in New York City.

Ricki’s Review: For me, this book celebrates the imagination. These two boys build their own villains out of household items, and the end results are hilarious. My son enjoys reading this book, and after our first reading we created our own villain out of couch cushions, a colander, and other cooking tools. While many readers will automatically attribute this book to boys, I think girls would love it, too! Who doesn’t love creating a monster out of every day items? Next winter, I plan to read this book with my son and take him outside to create an imaginative snowman. It will be the hit of the block!

Kellee’s Review: What a perfect book to review to coincide with the release of Captain America: Civil War! It highlights how anyone can be a superhero if they use their imagination and whatever they can find! I know that this is going to be a favorite of parents who like comic books and will be a reading ladder to super hero comic books because the next step after fighting Phat Tyre is Green Goblin! I also think that the story will really get kids’ minds reeling and get them playing! Too often I hear that kids aren’t playing enough anymore, but I believe that is because video games and TV are so stimulating. Bucky and Stu is imaginative enough that it will stimulate the minds of its readers and get them playing.

Teachers’ Tools for Navigation: This book would be a great choice to kick off a unit on imagination. Some elementary schools do invention fairs, and this would be a great book to initiate excitement in the fair. Further, with the highlight on STEM in education, teachers might consider pairing with a robotics teacher to show students how robots were made. It would be really neat if they could try their own hand at creating their very own robot! Now THAT is authentic learning!

Discussion Questions: How does using our imagination help us in life? When have you had to use your imagination creatively? What famous people (current or in history) are known for their imaginations?; How might this book inspire you to make your own invention?

This made us giggle and highlights the good fun of this book!

Read This If You Loved: The Most Magnificent Thing by Ashley Spires, What Do You Do with an Idea? by Kobi Yamada, The Dot by Peter H. Reynolds, The Noisy Paint Box by Barb Rosenstock, Lost and Found by Oliver Jeffers, Journey by Aaron Becker

1 thought on “Review and Giveaway!: Bucky and Stu vs. the Mikanikal Man by Cornelius Van Wright”