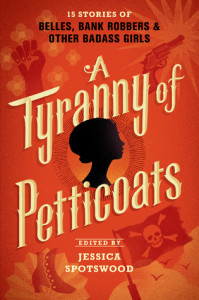 Summary: From an impressive sisterhood of YA writers comes an edge-of-your-seat anthology of historical fiction and fantasy featuring a diverse array of daring heroines.

Criss-cross America — on dogsleds and ships, stagecoaches and trains — from pirate ships off the coast of the Carolinas to the peace, love, and protests of 1960s Chicago. Join fifteen of today’s most talented writers of young adult literature on a thrill ride through history with American girls charting their own course. They are monsters and mediums, bodyguards and barkeeps, screenwriters and schoolteachers, heiresses and hobos. They’re making their own way in often-hostile lands, using every weapon in their arsenals, facing down murderers and marriage proposals. And they all have a story to tell.

A Tyranny of Petticoats Blog Tour!

The authors of this anthology are as diverse as their characters, so to give readers a better sense of their diverse processes and experiences writing for this anthology, the following three questions were asked of each contributor:

1. What inspired you to write about this particular time and place?

2. What was the most interesting piece of research you uncovered while writing your story?

3. Who is your favorite woman in history and why?

Today we are happy to host Caroline Richmond, Lindsay Smith, and Robin Talley as they answer those questions for us:

About the Author: CAROLINE TUNG RICHMOND  is the author of The Only Thing to Fear and the forthcoming The Darkest Hour, a YA novel set in Occupied France during World War II. A self-proclaimed history nerd, Caroline lives with her husband and daughter in the Washington, D.C., area — not far from several Civil War battlefields.

About the Author: LINDSAY SMITH  is the author of the Sekret series of paranormal spy thrillers set in Soviet Russia, and Dreamstrider, a high fantasy adventure. She grew up watching far too many movies from the 1940s — from Abbott and Costello comedies to musicals to anything dazzling with old Hollywood glamour. Not one for California weather, however, she lives in Washington, D.C., with her husband and dog, and writes on foreign affairs.

About the Author: ROBIN TALLEY is the author of Lies We Tell Ourselves, a finalist for the 2015 Lambda Literary Award for LGBT Children’s/Young Adult, as well as the contemporary novel What We Left Behind and the upcoming thriller As I Descended. Robin lives in Washington, D.C., where she enjoys being surrounded by history, though she’s glad to be living in the twenty-first century.

Don’t miss the other stops on the blog tour!

Tyranny of Petticoats is on sale March 8th!

**Thank you to Kathleen at Candlewick for having us as a part of the blog tour!**