I recently co-authored a YA novel with another writer, Briar Lee Mitchell. This process proved to be a positive and surprisingly creative experience for both of us. Briar got the ball rolling with a few sentences that described a rather ordinary scene, which had a slightly ominous suggestion of things to come.

It had only been a circle of stones by the river. Nothing so special about it really, but it hadn’t been there the day before. He was sure of it.

With that, we were off, bouncing pages and ideas back and forth. Over time, characters changed, names changed, and the story galloped off in unexpected directions. The end result was The Whistlebrass Horror published by Permuted Press. Our teamwork was a success.

While recently teaching a graphic design class, I thought it would be interesting for the students to design and illustrate something that they had written themselves. With so many dazzling distractions instantly available on their TVs, computers, and magic phones, many young people are discouragingly hesitant to open a book. If you suggest that they attempt some creative writing, you may find yourself confronted with a roomful of kids staring at you in bewilderment.

For instructors who love to read and are entranced with the magic of wordplay, there are few things as rewarding as winning over a reluctant reader or igniting the creative spark in a budding writer. The initial challenge is simply breaking the ice. I wondered if setting up my students in teams might be a good way to break through any stage fright they might have, and allow them to rely on each other to propel a story forward. I mentioned this idea to another instructor. His response was emphatic.

He had learned from experience that setting up classroom teams could result in disaster. Students were often paired with partners that they didn’t like. Some teams were saddled with a student who did no work, or an alpha kid who attempted to dominate the rest. The result was unproductive lopsided partnerships. After pondering the pitfalls, I came up with an alternative method of getting students to collaborate.

We started by discussing Chris Van Allsburg’s brilliant book, The Mysteries of Harris Burdick in which evocative pictures depicting mysterious events are accompanied by a title and a single sentence that encourage readers to invent their own stories.

I asked my students to each come up with at least two imaginative sentences that could be part of a novel or short story. The sentences did not have to relate to each other in any way. Most came up with ten or more that varied from wry observations to fragments of conversations. Students wrote about strange machines, modern day dinosaurs, telepathic dogs, and intimidating strangers. The surprising results were along the lines of the following:

The second part of the exercise was where the teamwork came sneaking in. Students were given lists of every sentence that the class had come up with. They were asked to select one or more of their own and one or more written by others. Then they were asked to write a very short story (a paragraph or two long) that included their selections. There was no limit on the number of sentences used, and most chose to use several. If necessary, changes in gender, names, and so on could be made.

The results were ingenious. The students read the stories aloud and enjoyed the laughter and applause they received. Some stories were very funny and some were quite serious. There were elements of fantasy, science fiction and magic realism. It was very interesting to see how different individuals used the same sentences to achieve different results.

Finally, the students created layouts and illustrations for their fiction. For many, it was a new experience to see their own writing and byline presented in a professional looking way. The entire exercise proved to be pleasant, provocative, and painless. My goal was to involve the students in authorship and collaboration, and to let them see how working with words can be fun and rewarding.

As they were leaving, one young man paused and said, “That was a fun class.” 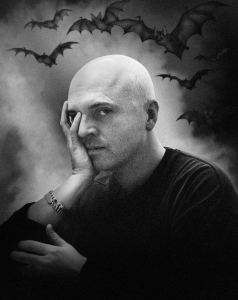 Some claim that Jack Keely is the son of a celebrated spiritualist. Others insist that he grew up in the wagons of a traveling carnival. In any case, he has always been an aficionado of the arcane, the peculiar, and the eccentric.

He spent four years exploring the haunts of H. P. Lovecraft in the historic city of Providence, while obtaining his degree in illustration from Rhode Island School of Design. After an additional two years of study at Cranbrook Academy of Art, Keely began a long and checkered career illustrating dozens of books, including the best-selling Grossology series by Sylvia Branzei.

He recently completed the cover art and interior illustrations forThe Whistlebrass Horror, and co-authored the tale with Briar Lee Mitchell. The duo is currently at work on a sequel, The Whistlebrass Storm Watcher.

Jack Keely is said to spend most of his time behind the chained gates of the Keely family manse. Although the moldering old house appears to be abandoned, a light can often be seen at night in the library windows. On quiet evenings, if their hearing was sufficiently acute, passersby would likely hear the rhythmic thwack of a typewriter, or the scratch of a pen across a sheet of drawing paper. 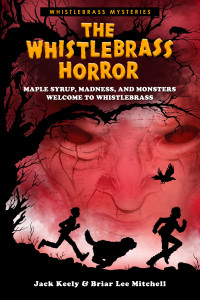 Founded on cursed land, Whistlebrass, Vermont is a place of dark deeds and darker dreams. Shortly after teenage newcomer Casey Wilde arrives in the haunted town his little sister disappears. Determined to get her back, Casey’s only clues are a murdered man’s rambling journal and a mysterious stone spiral on an isolated stretch of riverbank.

To help find his sister Casey teams up with Pike, a teen psychic with a rebellious streak. But Casey and Pike are up against a suave sociopath, a legion of living shadows, and a reptilian humanoid capable of stealing their life force and crushing them into dust. Who can Casey ask for help when no sane adult will believe his story?

Thank you, Jack, for this great teaching post, and thank you to Permuted Press for connecting us with Jack!