“My Son’s Teacher’s Approach to Reading”

My son’s passion is soccer, but math comes a quick second. Those drills everyone groans about? The ones where students have five minutes to solve a hundred problems? He eats them up.

I think I get why: each week there is an obvious growth potential. He can—and does—create specific goals. This week, he scored a 98 percent in division facts. If he can do the same or better next week, he can move up to double-digit division. The progress can—and is—charted, allowing him to see the steady increase in his knowledge base.

I have yet to see a writing or reading exam that goes beyond measuring grammar and vocabulary ability to measuring depth of engagement with a story. Sure, there are degrees of reading power tests, but do they really showcase whether a student “gets it”? I can time how long he spends reading, but how does that reflect what he absorbed?

Really, there is only one way to tell. Conversation.

My son’s second-grade teacher was brilliant at this. “Have you read this book?” she asked him one day, putting Call of the Wild on his desk. “I know you like dogs. Maybe you’d like this book. It’s one of my favorites.”

And then, a few days later, “What do you think about John Thornton?”

My boy was hooked. Maybe not on the story—at first—but in having book discussions with his teacher. He fell hard for the story later, but those few moments each afternoon where his teacher asked him where he was in the story filled him up. That she could hint to what was coming and loved the book as much as he did made a huge difference.

Soon he was asking her for other recommendations. Even better, he was looking for books he could recommend to her. “Mom, do you think my teacher has read this book?” he asked a few weeks later, pulling Where the Red Fern Grows from our shelves. “Do you think you could read it to me?”

Soon we, too, were talking through a book, drawing connections. He imagined what it would be like to live barefoot and wild like Billy. We moved on to Tuck Everlasting and debated what would make us drink from the spring. Would we want to live forever? He held my hand when my voice shook as I read the last chapter of Flora and Ulysses.

Now there were twenty kids in my son’s second-grade class. His teacher shouldn’t and couldn’t be expected to have separate lengthy book discussions with each child. But she didn’t have to; just a quick question here or there was more than enough to ignite his enthusiasm for reading.

My son’s daily reading log lists chapter titles and page numbers, but it doesn’t reflect the times he doodles Little Ann and Old Dan on his worksheets. It doesn’t measure his imaginary games of Quidditch on our front lawn, or take into account the Gryffindor hat he wears to bed each night. It doesn’t show that he named his guinea pig “Winn-Dixie.”

I ran into my son’s teacher at Barnes & Noble one Saturday. Her hands were full of books. One was specifically for my boy to read. “I can’t keep up with all of my readers,” she said. Is there any better indicator of amazing teaching than that?

Beth Vrabel grew up in a small town in Pennsylvania. She won a short-story contest in fourth grade and promptly decided writing was what she was going to do with her life. Although her other plans–becoming a wolf biologist, a Yellowstone National Park ranger, and a professional roller skater–didn’t come to fruition, she stuck with the writing. After graduating from Pennsylvania State University with a degree in journalism, she moved through the ranks of a local newspaper to become editor of two regional magazines and a lifestyle columnist. Beth now lives in Connecticut with her wonderful husband, two charming children, a spoiled rotten puppy, and two guinea pigs, Winn-Dixie and Pippin.

About A Blind Guide to Stinkville 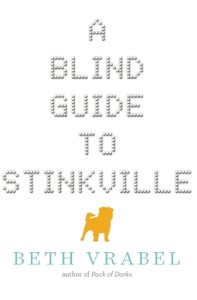 Before Stinkville, Alice didn’t think albinism—or the blindness that goes with it—was a big deal. Sure, she uses a magnifier to read books. And a cane keeps her from bruising her hips on tables. Putting on sunscreen and always wearing a hat are just part of life. But life has always been like this for Alice. Until Stinkville.

For the first time in her life, Alice feels different—like she’s at a disadvantage. Back in her old neighborhood in Seattle, everyone knew Alice, and Alice knew her way around. In Stinkville, Alice finds herself floundering—she can’t even get to the library on her own. But when her parents start looking into schools for the blind, Alice takes a stand. She’s going to show them—and herself—that blindness is just a part of who she is, not all that she can be. To prove it, Alice enters the Stinkville Success Stories essay contest. No one, not even her new friend Kerica, believes she can scout out her new town’s stories and write the essay by herself. The funny thing is, as Alice confronts her own blindness, everyone else seems to see her for the first time.

This is a stirring small-town story that explores many different issues—albinism, blindness, depression, dyslexia, growing old, and more—with a light touch and lots of heart. Beth Vrabel’s characters are complicated and messy, but they come together in a story about the strength of community and friendship.

Thank you, Beth, for this post. We hope our sons are fortunate to have teachers like this one.

1 thought on “Author Guest Post!: “My Son’s Teacher’s Approach to Reading” by Beth Vrabel, Author of A Blind Guide to Stinkville”