“The Power of One”

I remember the times as a child when I simply wanted to disappear from the classroom or wished I had been able to hide under my desk.  The humiliation of having been verbally assaulted the night before by my dad stripped me of any shred of confidence I might have been able to muster that day.  My teacher saw that lack of confidence not only in my eyes and school work, but in how I always seemed to avoid her.  She asked me repeatedly throughout the school year why I had not done my homework and more than once berated me in front of the whole class for being the ONE student who kept “forgetting it at home… again.” Had she asked me if anything was wrong, I would have responded with a shrug and then a simple, “Nothing.”  Attention, any attention from anyone in authority was always bad and I avoided it like the plague.

As a teacher, helping students who have a rough home life can seem more difficult now than ever. Getting involved often opens a can of worms that can lead down a rabbit hole that seems endless. Having said that, there is a wonderful way to breathe life into a student whom you suspect is having a rough time at home: spend time with them.  Coaching, after-school activities and other events give you opportunity to invest in them.  Find out their interests and be intentional.  Invite them to be a part of what you’re doing.

I once had a teacher encourage me to join the debate team that she coached.  Mrs. Turner was the first teacher to say, “I think you’d be good at this.” I never heard those words from a teacher before.  Her confidence in me made me want to do anything to please her. I was so shy and reserved I would never have considered doing something like that, but her persistent encouragement won me over. Her kindness and patience helped me get over my fears and birthed a hope in me that grew with time. She was the one bright light in my dark world. At first, I limped through each practice debate barely able to look up from the podium while speaking. I was surprised to discover many of other kids were as scared as I was.  I felt a camaraderie with the other students as we all struggled to overcome our fears. After each practice debate, the teacher would critique our performance. She wisely started with a whole list of things we did right and then would kindly pick one or two things that we could work on to improve. She had a way of making us feel important that pushed us to try harder.

My home life situation deteriorated more as my father began to get more violent.  His verbal assaults were accompanied by physical abuse, and eventually my mother chose to divorce my father. More than once, the debate coach gave me a ride home after a late night of practice so I didn’t have to walk the five miles back in the dark.  Eventually, I got over the terror of public speaking and our debate team went on to win the Regional tournament in Debate.

After the divorce, we moved to another town. No other teacher had an impact on my life like Mrs. Turner did. I never forgot the look in her eyes when she said, “Mark you can do this.”  She believed in me and was able to see not what was, but what could be.  Many years later, her investment and confidence in me bore fruit.  I became a motivational speaker and have spoken in front of groups of thousands all over the world.

I have taught in the classroom many times, and I occasionally have a student in class who I recognize as having a difficult home life. They are wounded in a way that seems to scream out, “help me,” but their cries for help are not heard in the noisy classroom.  Mrs. Turner was not deafened by the noise. She made it her mission to filter out the noise.  She showed me the power of one.

ABOUT THE TANK MAN’S SON: 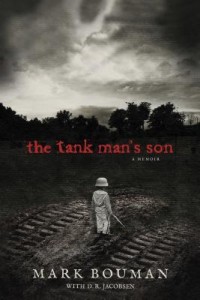 “What did it mean to be the Tank Man’s son? To grow up overwhelmed by my father’s presence and personality? It was as if I didn’t exist, as if I was just something else for my father to crush.”

So begins the haunting memoir of Mark Bouman as he recounts the events of his childhood at the hands of his larger-than-life, Neo-Nazi father in brilliant, startling detail. From adventure-filled days complete with real-life war games, artillery fire, and tank races to terror-filled nights marked by vicious tirades, brutal beatings, and psychological torture, Mark paints a chilling portrait of family life that is at once whimsical and horrific—all building to a shocking climax that challenges even the broadest boundaries of love and forgiveness.

An epic tale of redemption and reconciliation, The Tank Man’s Son is a literary tour de force that is sure to become an instant classic.

Mark Bouman shares more about his horrific childhood and the power of forgiveness in The Tank Man’s Son. He and his family served as missionaries to Cambodia for more than 20 years. Mark, his wife Joan, and their two sons Andrew and Nik, currently reside in Anchorage, Alaska.

Thank you to Mark for this powerful post about positively impacting students with rough home lives. And thank you to Christy at Tyndale House Publishers for connecting us with Mark!