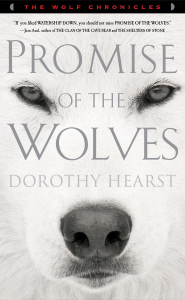 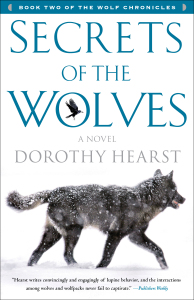 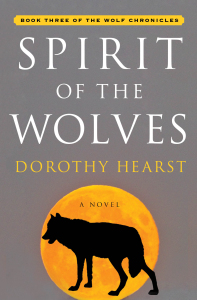 Series Synopsis: Inspired by the theory that it was wolves, and later dogs, that made humans the dominant species on earth by teaching mankind to hunt cooperatively and form complex societies, The Wolf Chronicles begins 14,000 years ago with PROMISE OF THE WOLVES. It is engagingly told from the point of view of lovable Kaala—an outcast young wolf who has been charged with watching over humans in order to prevent them from losing touch with nature and thus destroying the world.

About the Author: Before the wolves barged in the door, demanding that their story be told, Dorothy Hearst was a senior editor at Jossey-Bass, where she published books for nonprofit, public, and social change leaders. She currently lives, writes, and plays with dogs in Berkeley, California.Spirit of the Wolves, the third and final title in the Wolf Chronicles, will be released December 2. For more information, and to download free CCSS-aligned discussion questions for all three novels, visit her website: dorothyhearst.com

“How Research Transformed The Wolf Chronicles”

When I got the idea to write novels about how the wolf became the dog from the wolf’s point of view, I knew that I had a lot of research ahead of me. And I balked. I’d never been any good at research.

But wolves can’t type, and they wanted their story told, so I hunkered down and got started.

It turned out that research was one of the best parts of the writing process. I snow-shoed in Yellowstone, chased huskies in the French Alps, spent hours in wonderful public and university libraries, and walked through a cave where someone had stood 14,000 years ago, painting a bison.

But what surprised me most was how research shaped my story. It profoundly changed The Wolf Chronicles in several ways:

It changed my wolves:

Like many people, I used to think that wolves were vicious animals that fought all the time and were very different from us. Books like Richard Busch’s Wolf Almanac showed me that wolves are actually highly social animals that rarely fight. Then I read up on prehistoric cultures, and learned that our ancestors and wolves lived surprisingly similar lives. This changed all the interactions between wolf and human characters, and made Kaala and her pack much more complex.

It deepened the story:

Early in my research, I learned about wolf-human coevolution, the theory that wolves and dogs may have greatly influenced our evolution. good lThen, Barry Lopez’s Of Wolves and Men showed me that wolves have long been emblematic of very different views of nature. This research made Kaala’s story more than the tale of a young wolf on a quest. It grew to be about our own connection to the natural world, and what that connection means for our future.

It gave me new characters:

While reading up on wolves, I learned that wolves and ravens often play together, so I decided to write just one scene with ravens in it. The raven Tlitoo decided he wanted a bigger part in the book, and became a major character. While on a trip to Yellowstone to watch wolves, I was awoken by a herd of elk bellowing outside my window. Ranor the elkryn marched into the story.

It gave me new scenes

Two scenes in the trilogy are drawn directly from the many documentaries and videos I watched. In Promise of the Wolves, Kaala and Ázzuen struggle to cross a great plain. This is from a video about wild dogs. The filmmakers actually rescued a pup who fell behind (I write about it here) which they weren’t supposed to do. A scene in which Kaala steals from sabre-toothed cat cub is based on a video of a young wolf playing with a young bear until Mama bear got annoyed.

In the end, research enriched The Wolf Chronicles in ways I never could have imagined. I am now a dedicated research devotee.

I love the idea of the wolves making their way into classrooms. Here are some topics that lope through the books:

Thanks so much to Unleashing Readers for hosting me!

**Thank you to Barbara from Blue Slip Media for asking us to participate in the blog tour!**