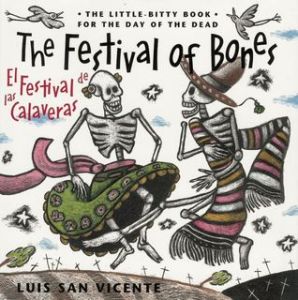 Goodreads Summary: On Mexico’s Day of the Dead, the skeletons jump for sheer joy. And no wonder: they’ve been cooped up the whole year and now they’re ready to party. Watch the calaveras shake, rattle, and roll as they celebrate the biggest event of the graveyard’s social calendar!

About the Author: The works of Mexico City artist Luis San Vicente have been exhibited in Mexico, Venezuela, Europe, and the United States. He has won UNESCO’s prestigious NOMA Encouragement Concours Prize for Illustration, and UNESCO honored his work (1997, 1998, and 1999) in their prestigious Youth and Children’s Catalog of Illustrations.

My Review and Teachers’ Tools for Navigation: I first learned about the Day of the Dead when I lived in Texas. My father was the director Laguna Gloria, the art museum in Austin, and I saw some artwork from local Mexican-American artists that depicted the traditional skeleton seen in Day of the Dead art. My father then told me about the holiday and since then I have been quite intrigued with it. San Vicente’s story is a great introduction to the (kind of creepy) holiday, its history, and traditions. The text is in verse with a catchy rhythm and the illustrations are so lively AND it is bilingual. I loved seeing the text in Spanish and English. Then, the afterword further informs the readers about the holiday filling in any gaps left by the story.

Discussion Questions: What did you learn about Mexico’s Day of the Dead? How is it celebrated? What is its history? What food is eaten at the celebrations? 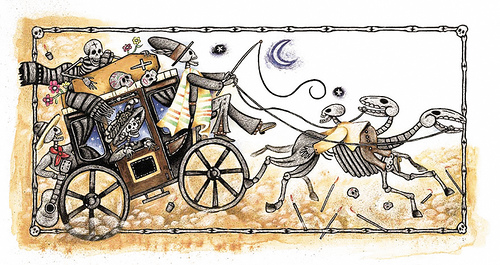 “Giddyup! Giddyup!
Oh, they want to catch me.
To that ugly skeleton…
They want to marry me.

1 thought on “Festival of the Bones / El Festival de las Calaveras: The Book for the Day of the Dead by Luis San Vicente”