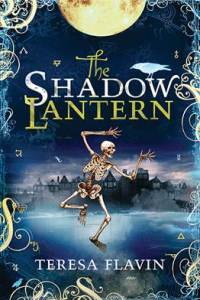 Publisher’s Summary: It’s Halloween at the Blackhope Tower and the spirits are rising… When a mysterious oil lantern and a box of painted slides appear at Blackhope Tower, Sunni and Blaise are drawn back to the place where their adventures first began. When they discover that the slides conceal secrets about artist-magician Fausto Corvo, the pair find themselves once again caught up in a deadly pursuit. An old enemy is still tracking Corvo and will stop at nothing to find him. Sunni and Blaise must fight to protect Corvo’s secrets and rid themselves of Soranzo’s evil threat once and for all.

Sunni and Blaise face their most dangerous challenge yet in their third and final adventure.

The Shadow Lantern is the third book in The Blackhope Enigma trilogy.

Book 1’s Publisher’s Summary: For centuries, Blackhope Tower has been shrouded in intrigue, centering on a labyrinth and painting in the Mariner’s Chamber. When fourteen-year-old Sunni Forrest visits the tower and sees her stepbrother, Dean, disappear, seemingly into the painting itself, she must find him and risk being drawn into the heart of the Blackhope enigma. This action-packed debut follows Dean, Sunni, and her friend Blaise on a journey to the heart of an age-old mystery.

An ancient painting, a magical labyrinth, and skeletons found in a locked room.

About the Author: Teresa Flavin was born in New York and studied art in Boston and at Syracuse University. After moving to Glasgow, Scotland, she was awarded the Scottish Arts Council New Writers Bursary. She has illustrated a number of picture books. Her first novel, The Blackhope Enigma, was nominated for a Cybil Award. Teresa Flavin lives in Scotland.

Today we are lucky enough to have Teresa here at Unleashing Readers to talk to us about her process:

I’m a planner, pure and simple. Once an idea for a story has taken hold in my head, I make notes, create mind maps and get the bones of it down on paper. At the same time, I don’t want to have every scene mapped out so tightly the story can’t breathe and evolve in an unexpected and interesting way – which it inevitably does!

I look forward to previously unplanned characters showing up on the page wanting a piece of the action. And because I find so much inspiration in history, and do a fair amount of research, I often stumble on a nugget of information that can move my story in exciting and serendipitous ways. For example, when I learned that the development of some artists’ paint pigments was tied up with alchemy, I saw what a great element it could bring to the second story in the trilogy, The Crimson Shard.

Before I get too far with a new story I share a short synopsis with my agent because she’s great at asking tough questions that test the bones of my idea. I revise that synopsis until we both consider it viable, knowing that the story will change a lot. When I look back over old versions of my synopses I am astonished at how much the stories evolved before I even started writing them.

Once I know roughly where a story is going, I write it from start to finish. I am not good at skipping around and writing scenes out of order. That would feel like fast-forwarding the film and missing important links in the middle. I admire authors who can work in a non-linear way but I prefer my own method. I like how a story unfolds, how one scene influences the next.

If I’m on a deadline, I write to a daily word count, breaking the story down into manageable chunks. Some days are definitely more productive than others! I revise my finished manuscript at least two or three times on the recommendations of my editors. I am infinitely grateful to all of them because they read with clarity when I am too close to the story. Though I am the writer, I see my books as team efforts, with my editors inspiring me to make the best story I can.

People often ask me whether I read other children’s books while I’m writing my own and what books influenced my trilogy. I tend to avoid reading children’s fiction while I am creating my own, but I do read adult non-fiction such as history books. If I read any fiction, it’s for grown-ups and generally quite different from the kind of fantasy books I write.

Before I started writing for young people, I read very little children’s or young adult fiction. I think that my writing is probably influenced most by the books I enjoyed as a kid, from The Chronicles of Narnia to Sherlock Holmes to Ray Bradbury stories like The Illustrated Man. If it was a colorful, atmospheric adventure, I was hooked. If my own trilogy can intrigue young readers as fully as any of the books I loved, my mission is accomplished.

Many thanks to Unleashing Readers for hosting me!

And thank you Teresa! We loved hearing about your process!

Thank you so much to Teresa Flavin and Candlewick Press for the guest post and giveaway!

1 thought on “Author Guest Post and Giveaway!: The Shadow Lantern, Book 3 of The Blackhope Enigma Trilogy by Teresa Flavin”