When I was a young student, I found history boring. Back then, it required lots of memorization and comprehension of readings that felt flat to me, dry as the age-old dust they were steeped in. Years later, a gifted teacher flipped the switch—she introduced the personal stories behind historical figures and events and BAM! I was hooked. Learning about Hatshepsut’s struggles as one of the few female Egyptian pharaohs, or Wangari Maathai’s crusade to teach African women to plant trees and claim their independence and power, excited me and provoked lots of questions. I imagined what it’d be like to be those women and face those challenges. This led me to research more and to care more, which then led to greater retention of concepts and the desire and ability to share them with others.

As a fifth-grade teacher, I sought ways for my students to step into the shoes of others so they too could attempt to feel some of the pain, passion, and motivation of historic figures. In my classroom, we did this through writing projects, dramatic interpretations, and culminating performances. For instance, during our exploration of ecology, we read picture book biographies of environmentalists, including those who were not scientists. How did Pete Seeger’s singing and songwriting impact the Hudson River? Simon Rodia built the Watts Towers in Los Angeles from recyclables. How did he do this when he didn’t speak English? We cast a broad net so students could see that the preservation and rehabilitation of the natural world could be approached in many ways, and, most importantly, it could include them.

As we examined local problems affecting Long Island Sound, we wondered how environmentalists from the past might attempt to solve them. Each student chose one environmentalist and wrote a monologue which they presented to the rest of the class in costume, using props to introduce themselves. Students also took part in a popular activity called History Speaks, a mock talk show that got kids to think more deeply about what motivated these environmentalists. As host, I facilitated a conversation between the “guests,” students impersonating ecologists, and the audience of other students who asked them questions. Why did MaVynee Betsch give up her career in opera to save American Beach in Florida from development, even when she got so sick she couldn’t eat? How did Chico Mendes stay brave in the face of his attackers as he worked to protect the rainforests in Brazil? Kids learned how to craft deep interview questions. Those representing the ecologists had to think on their feet, often answering them by extrapolating from facts that they already knew. Sometimes their answers or their body language caused the audience (or host!) to debate whether they spoke the truth, another useful discussion when it comes to teaching how to research. This seemingly simple, playful activity encouraged critical thinking and active listening.

The resurrected ecologists also participated in a roundtable discussion to brainstorm a list of creative ways that they, as a team, could alleviate one of Long Island Sound’s problems. They experimented with combining strategies used in the past with newer present day ideas. Could George Washington Carver’s ideas about soil conservation possibly apply to saving Connecticut’s shoreline? How would he and Jacques Cousteau interact as team members? Finally, using notes gathered from all these activities, students wrote stories about resurrected dead ecologists who helped confused modern day activists solve problems around Long Island Sound and shared them with younger students. Other times, groups wrote a story as a script, built props, and then performed it for an audience. With their deep research into the history of environmentalism, students armed themselves with enough knowledge to become passionate environmental activists themselves.

Using the imagination to extrapolate on what we know as fact is a fun and enlightening practice that promotes rich discussion, enhances the development of empathy, and allows kids to practice ways of assessing “the truth.” The strategies that I used in my classroom and the memories of my explorations with students were the seeds for my middle-grade novel, Artemis Sparke and the Sound Seekers Brigade, whose protagonist conjures up ghosts of environmentalists to help her save her beloved salt marsh sanctuary. I hope readers gain respect for the legacies we’ve been gifted by those who are no longer with us and are inspired to consider how their own legacy can be a gift to future generations. 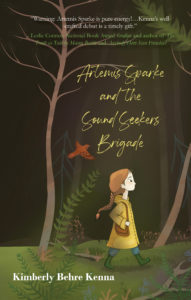 About the Book: When Artemis Sparke has had it with humans, she heads to the nearby salt marsh to hang out with the birds, plants and mollusks who don’t make a big deal of her stutter. The shoreline sanctuary is predictable, unlike her family and friends, and the data in her science journal proves it. But one day that data goes haywire, and her bird friend RT confirms it: the salt marsh is dying. Artemis discovers that the historic hotel where she lives with her mom may be part of the problem, but speaking up would mean confronting the cranky hotel owner who happens to be her mom’s boyfriend and boss. Artemis conjures up help from deceased ecologists, and as she works to untangle their clues, she finds family secrets that could be the key to saving the salt marsh. An empowering read about the importance of finding your voice, “Artemis Sparke” will strike a chord with kid activists everywhere. 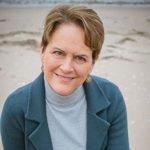 About the Author: After years as an adolescent and family counselor, and then as a fifth grade teacher of ecology and language arts, Kimberly Behre Kenna returned to school for her MA in creative writing from Wilkes University. Her middle-grade novel, “Artemis Sparke and the Sound Seekers Brigade” was a finalist and received Honorable Mention in the 2019 Tassy Walden New Voices in Children’s Literature Competition, and will be published by Fitzroy Books in 2023. Another book in her Brave Girl Collection, “Jett Jamison and the Secret Storm” is forthcoming from Black Rose Publishing. A third in the collection, as yet unpublished, won second place in The Institute of Children’s Literature 2022 MG Mystery First Pages Contest. Her poems and short stories have been published in American Writers Review, Mused, Plumtree Tavern, and Rubbertop Review. Her full-length play, “Ana’s Hummingbird,” was given a staged reading at The Dramatists Guild in NYC. She’s a member of SCBWI and PEN America, and now devotes herself to writing full time. Connect with her at www.kimberlybehrekenna.com

Thank you, Kimberly, for this great post showing that connection between fiction & non-fiction!