An irritated parent accosted me in the parking lot. “Don’t make my son do that assignment,” she pleaded.

Some years ago I taught playwriting to middle schoolers. The class was an elective so all of them had chosen to be there. Yet when it came time to start writing, all I heard was “I can’t think of anything.” or “I don’t have any ideas.”

That’s when I came up with an idea to help them come up with ideas. Prior to beginning the playwriting process, their homework was to ‘Just say no.’ to electronic entertainment. No broadcast or cable television viewing. No computer games or internet browsing. However, using the computer for responding to email, using the internet for teacher-assigned projects and attending movies or plays at a theater were permitted. (This was before cell phones became so pervasive.) And that’s why this mother grabbed me in the parking lot. “You’re punishing the whole family,” she said. “To prevent him from doing it, we have to not do it, too.”

This mother was a lady I liked. She knew I was an author and had aspirations for writing fiction herself but hadn’t gotten around to it. Life in the big city keeps you pretty busy, after all. I would try to encourage her to sit down and write but somehow her schedule would never allow for it.

Despite her impassioned objections to the no TV, no internet rule, I held firm. The assignment required students to abstain for four consecutive days. They could use the computer for homework in other classes, but not for fun. Parents had to sign a sheet documenting that their children had complied. I also sent home a list of things they could do besides watch television or play video games. Among the things I suggested: practice a musical instrument, go to a friend’s house, ride a bicycle, fix that thing that’s been broken forever, sort out a closet, play outdoors. The first item on the list was: start writing your play.

After the experiment, they also had to write about the experience. Some of their comments:

It was okay living without TV. I don’t really watch a lot of television anyway, except on weekends. I went outside for bike rides, went for some ice cream, and played sports…   I also read a lot, and wrote e-mails, letters, essays and poems.  —Alicia K.

It was a nightmare going without TV… I thought I was going to die. Living without TV for four days was not as bad as I thought it was but it was still a little boring. Life went on and I and everybody around me lived.This might sound a little abnormal but I held it in. The temptation was there… I mean once in awhile I felt like getting up and turning on the TV.  —Colby J.

Going without [technology] was not hard. It was actually kind of fun. I got all of my homework done (that is not usual.) I was able to read a book and enjoyed it. I had free time to myself. I was able to work on all my projects and turn them in on time. —Jamela S.

After this period of abstinence, students ‘magically’ had great story ideas to put down on paper. It was easier for them to get their plays underway. Emptying their minds of electronic clutter seeded and strengthened their imaginations.

Although I, too, am guilty of spending too much time bouncing between You Tube and the boob tube, sometimes I actually act on my own advice.

I distinctly remember an occasion when I jumped in the car and reflexively reached for the radio. But before my hand could make contact with the tuner, that still, small voice said “No.”

I stifled the urge to fill the car with noise and stayed silent. As I drove in the quiet, I began thinking about my MG novel JAYLA JUMPS IN, which was still in progress. As I mused about my plot, I was able to work out several scenes. Being willing to put the tech in check enhanced my creative process.

Julia Cameron, creativity guru and author of THE ARTIST’S WAY, calls this practice ‘media deprivation’ when you deliberately call a time-out from consuming all forms of artificial amusement to give your brain a re-set.

Not long after the assignment to temporarily go screen-free so that her son could write a play, that same mom stopped me again in the parking lot. This time she wasn’t angry, she was bubbling over with excitement. “Guess what!” she said. “I finally started my short story!”

Would your students benefit from a technology break? 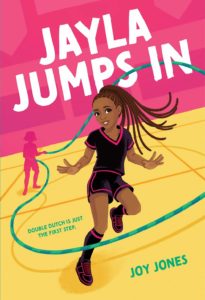 About the Book: When eleven-year-old Jayla finds out that her mother used to be a Double Dutch champion, she’s stunned. Her mom, who’s on doctor’s orders to lower her blood pressure, could move like that?!? Jayla decides to follow in her mom’s footsteps, thinking that maybe double Dutch can make her stand out in her big, quirky family. As she puts together a team at school and prepares to compete, Jayla finds that Double Dutch is about a lot more than jumping rope–and it just might change her life in ways she never imagined. Full of hilarious family dynamics and plenty of jump rope action, Jayla Jumps In follows one girl’s quest to get her mom healthy and find her place in her community. 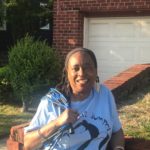 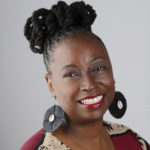 About the Author: Joy Jones is an author, trainer, and playwright.  Her play, Outdoor Recess, won the Promising Playwrights’ Competition by the Colonial Players in Annapolis, MD. Among her children’s books are the acclaimed picture book, Tambourine Moon, and Fearless Public Speaking, a how-to for teens. Her newest book, Jayla Jumps In, an MG novel, will be released in paperback Fall, 2021.Jayla Jumps In was inspired by the multi-generational double Dutch program she founded, DC Retro Jumpers. Visit her on the web at: http://www.joyjonesonline.com.

For kids – the Jayla Jumps In Activity Book – http://joyjonesonline.com/freebies/ In order to complete the download, they need to enter the code  895$230

Thank you, Joy, for this awesome activity and for your generous gifts! We are thankful for you!