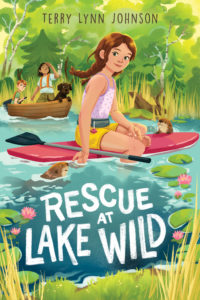 Summary: In this funny and moving animals-in-peril adventure, a twelve-year-old girl and her two best friends determine to rescue two orphaned beaver kits—and soon find themselves trying to solve a local environmental crisis.

Everyone knows that twelve-year-old Madison “Madi” Lewis is not allowed to bring home any more animals. After she’s saved hairless mice, two birds, a rabbit, and a stray tom cat that ended up destroying the front porch, Madi’s parents decide that if they find one more stray animal in the house, she won’t be allowed to meet Jane Goodall at an upcoming gala event.

But when Madi and her two best friends, Aaron and Jack, rescue beaver kits whose mother was killed, they find themselves at the center of a local conspiracy that’s putting the beavers and their habitats in danger. As Madi and her friends race to uncover the threat targeting the beavers, Madi must put her animal whisperer skills to the test in both raising the orphaned beaver kits and staying out of trouble long enough.

About the Author: Terry Lynn Johnson writes about the wild with the wisdom and passion of someone who has spent her life working to preserve and protect it – both as a backcountry canoe ranger in Quetico Provincial Park and in her current job as a conservation officer with the Ontario Ministry of Natural Resources and Forestry. She lives at the edge of a lake in northern Ontario, Canada, where she loves watching all wildlife, including beavers. Visit her online at terrylynnjohnson.com

Review: This book is everything the summary promises and more. I read it in one sitting because I couldn’t put it down. It was so interesting learning about beavers and conservation, but also watching Madi and her friends figure out the solution to a problem that adults automatically went to the extreme about.

Kids are going to love Madi and her friends. Their banter is so funny yet right on point for their age. I also love seeing how close they are even as they grow up and change.

In addition to the main story about the beaver rescue, Madi’s family situation will bring about good conversation about different types of families.

But truly, the real stars of this book are the beavers. I never knew as much about them as I do now, and they are such interesting animals. This book definitely led to inquiry as I wanted to learn so much more about environmental conservation and beavers.

Teachers’ Tools for Navigation: In addition to being a book that so many kids are going to want to pick up and read, this book lends itself perfectly to so much in the classroom!

Madi talks often in the book about her grandmother and Jane Goodall and all of the work they did to help preserve animals; however, there are tons of other scientists who help converse nature and animals’ habitats. Have students research these scientists, and remind them to think about local and smaller rescue facilities who do work that often aren’t recognized.

Madi LOVES animals and we learn so much about beavers in this book. Use the idea of Madi’s notebook to have students pick an animal and research it.

Finally, learn about Terry Lynn Johnson’s inspiration for Rescue at Lake Wild here. This would lend to a great discussion about author’s purpose and point of view.

I hear it again.

Urgent chattering reaches us from the mound of sticks and mud just off the bow of our boat.

As an animal whisperer, I know these things, but sometimes I have to remind certain people.

A breeze catches the boat and swings us around the anchor line. The channel’s empty except for the beaver lodge, the three of us, and one bored dog.

“We’re sure the parents aren’t coming back, Madi?” Aaron asks.

“You saw their parents,” I say. “They’re not coming.” We’ve been here almost two hours to make sure there were no other adults in the lodge.

“Before you say I should do it because I’m smallest,” Aaron says, “let me remind you I’ve been the rescuer the last two times.”

He’s talking about when we boosted him into a tree to save a raccoon that turned out not to need saving. Okay, I was wrong that one time. But the day we lowered him from the window by his feet to save the baby bird? That bird would have died without us.

“Out of the three of us, you’re the easiest to hang by the feet,” I say reasonably.

“It’s not my turn.” Aaron shifts on the aluminum seat. “And I’m not that small.”

“We’ve never done this before,” Jack says. “So it starts over.”

Adjusting the tiller handle, I move to sit next to Aaron in the middle of the boat. “We should play for it.” I hold up a fist, the universal sign for rock-paper-scissors. “So it’s fair.”

The three of us stick our fists together. Jack’s black Lab, Lid, pokes his nose into the circle too, ever hopeful that we’re about to unveil food.

“No!” Aaron yells at our scissors to his paper. “Rigged!”

“I’d take your shirt off if I were you,” Jack advises. “So it doesn’t get stuck and snag you down there. We probably wouldn’t be able to pull you up.”

Aaron pales but tries to look brave. “I always end up doing it,” he grumbles, reaching behind his back to pull off his T-shirt. The hot July sun bounces off his blinding white torso.

Aaron scowls at us and then glances over the side of the boat. He studies the brown water and mutters something about leeches.

“Maybe you should keep your shirt on for protection,” I suggest, eyeing his stick-thin arms covered in rust-brown freckles, and his pale shoulder blades that could cut a breakfast sausage.

“Are they even still alive?” Aaron says. “I can’t hear them anymore.”

He’s right. There’d been no sounds from the lodge in the last few minutes we’ve been sitting here arguing.

Earlier, we’d found two adult beavers floating dead on the other side of the channel. Jack, as usual, had wanted to investigate the crime scene immediately. But the noises from the lodge mean babies inside. Those babies will starve to death if we don’t rescue them.

We’ve been waiting here long enough to know there are no other adult beavers coming to take care of them. But how long have the young ones been alone in there? Maybe they’re starved already.

We still our movements in the boat and drift. An enthusiastic frog trills next to us. The wind rustles the leaves of trembling aspen towering above. The water gently laps at the aluminum beneath us. We strain to hear anything. The silence stretches.

A long, high-pitched noise erupts from Lid’s rear end. It echoes strangely from the bottom of the boat, sounding like an optimistic elephant. Surprised, Lid looks behind him.

Aaron and Jack both burst out laughing. It’s so hard to keep boys focused.

“Guys, I don’t hear them. Maybe we waited too long.” Maybe the little beavers are just too weak now to make noise and desperately need help right this very second. I grab the anchor and haul it up. “We have to hurry!”

I yank at the oars and thrust the boat up onto the muddy bank of the lodge. Lid jumps out first, followed by Jack, who ties us off on a log. Aaron warms up, swinging his arms, further accentuating his shoulder blades.

Stepping onto the latticed sticks, I peer at a section of the lodge’s roof that’s been ripped apart, most likely by wolves. But the predators haven’t gotten through. The only way into an indestructible beaver lodge is underwater.

“Okay. You’re looking for the opening to the tunnel,” I say to Aaron. “It’ll be hidden among all the sticks. Hopefully it’ll be wide enough for you to fit. You can breathe once you get into the chamber. It’ll be a room above water like a den. That’s where you’ll find the baby beavers.”

Aaron nods while staring at the lodge. He examines the murky water.

I watch him uneasily and think about when we’d boosted him into that tree. He’d spent most of the time clutching the trunk and yelling for us to bring him down. And when we’d lowered him for the bird he insisted over and over, “Pull me up!”

This is actually dangerous. If Aaron panics, he could drown for real. He could get lost under there, or get caught on something, like Jack said.

A fluttery feeling builds inside my chest. Did Jane Goodall let someone else face aggressive chimps at the Tanzania research center? No.

It should be me.

Read This If You Love: Lost in the River of Grass and Hurt Go Happy by Ginny Rorby; Song for a Whale by Lynne Kelly;  Vet Volunteers by Laurie Halse Anderson; Primates: The Fearless Science of Jane Goodall, Dian Fossey, and Biruté Galdikas by Jim Ottaviani

**Thank you to Barbara at Blue Slip Media for providing a copy for review and giveaway!**

6 thoughts on “Review and Giveaway!: Rescue at Lake Wild by Terry Lynn Johnson”