“Insights from a First Time Author”

Hello! My name is Vali Benson and I have been a writer all my life. I can also now call myself a published author. It still seems like a dream, but it’s true. Ever since I can remember, I have had a book in my hand. As a lifelong reader, I often thought, “I could do better than that”. So I decided to finally do something about it. People have asked me to explain the writing process but I can’t. I don’t think there is a right way or wrong way to write a book. But I do know what works for me.

The first step is to come up with an idea. It must be something that interests you, or that you feel strongly about. If you don’t care what you are writing about, you will simply get board and the work will suffer. Once when I had severe writers block, a great teacher told me, “Write about what’s in your own backyard”. I took my teacher’s advice and turned in an award winning essay. That was the inspiration in writing my book; a young adult historical fiction novel called Blood and Silver. The story takes place in Tombstone, Arizona. For thirty years, I have lived in Tucson, Arizona. Tombstone is only forty five minutes down the road, practically backyard distance.

The population of Tombstone today sits at about thirteen hundred. On the weekends, many of the residents dress up in western garb – as cowboys, sheriffs, frontier gamblers, proper matrons and saloon girls. At first glance, it seems as though this may be a retirement community designated for extras of John Ford films. However, Tombstone does have one enduring claim to fame – the shoot out at the O.K. Corral.  It is called “the most famous thirty seconds in the history of the American west”. The legendary incident is a gunfight that occurred in 1881. The shoot out involved Doc Holiday, Wyatt Earp and two Earp brothers against a gang of outlaws called the Cowboys. Three men were killed, all of them Cowboys. The Earps and Doc Holiday were already famous in the west.  The gunfight made them infamous.

Tombstone was the largest city between St. Louis and San Francisco in 1884, with over 150 businesses, including 100 saloons, and a thriving red light district. Apparently this arid little tourist trap, only forty five minutes from my hometown, was more important than I thought!

This information began to spin my inquisitive wheels.  I began to wonder what it would have been like to live in this obscure place in 1880. The first step was complete; I had a premise that sparked my interest.  Now, it was time for the part of the writing process that gives life to the story, research.

Research is pivotal no matter the genre. It allows the author to properly prepare the reader so that they are engaged in the narrative. One needs to look in unusual places, not just the top three Google hits. I love sourcing museums, libraries, newspaper archives, and even historical homes. Don’t rely on your computer only. Everyone can get that information. Not only is it not original, it is not interesting.

One tip that I would like to emphasize to a burgeoning writer is to seek out primary sources whenever possible. If you can work from the original source, it falls on you to interpret the story. This allows you to not have to depend on someone else’s version of the truth.

As I began to delve deeper into the true story of Tombstone, I also uncovered unexpected angles. The most prominent of which was the effect of the Chinese population. The result of this research led me to a real person whom I could never had made up, a woman named “China Mary”. This woman lived in Tombstone from 1879 – 1906 and essentially ran the town. In addition to operating a gambling hall behind her general store, she was also the preeminent broker for opium, laudanum and Chinese prostitutes. After I discovered the real life splendor of China Mary, I made her one of my central characters and twisted my fictional story around her actual exploits. None of that could have been possible without an extensive research period.

Being a writer of historical fiction, historical accuracy is the most important component of the piece to me. It is even more pivotal than the narrative. I cannot tell you how many times I have quit reading a book that claims to be factual because the information and events are incorrect. It really annoys me! It is also important to realize that research is never ending because you can’t ever learn everything there is to know. At some point, you just have to make up your mind that you have enough to craft the story you want to write. Then start writing!  I begin writing using my research as a reference and don’t worry if I have a fully formed concept. I believe in the Jodi Picoult approach, “You can always edit a bad page. You can’t edit a blank page”.

Many writers believe in outlines as a method of organizing and categorizing their research. Outlines don’t work for me. I tend to be too specific.  I end up writing the whole story in my outline.  What works best for me is to simply write.  Just start, and see where it takes you.  I flesh out the characters first. You can do whatever you want with your people, just be sure you wind it up so that it makes sense.

As far as my writing habits are concerned, I don’t have many. I just do it. I know that many professional writers say the best method is to treat writing like a regular job with set start and stop times. I’ve tried this and it never feels right. For one thing, when I get on a creative roll, it is nearly impossible for me to stop. Conversely, I cannot force an idea. When I don’t feel like it’s happening, I walk away. I commit a lot of time thinking about my characters; which may be the most crucial part of the writing process. When inspiration strikes, I will sit down with my glass of sweet iced tea and see how my characters handle the new twist. I know that strong coffee is the traditional nectar of the working writer, but I need my sweet tea. The sweeter the better!

When your story is finished, it doesn’t mean that you’re done writing. Now is the time for my least favorite part of the writing process, editing. Editing is obviously extremely important but I find it terribly frustrating. I try to remember not to over edit as there is a difference between editing and rewriting. Aside from the occasional grammatical error, most of my editing is about subtraction rather than addition. I choose to think of my editing time as a tightening up period. This is when I can really focus on making my narrative flow the way that I want. I also make sure the story is always kept in perspective and unfold s the way that I want it to.

When is your story finished? It is finished when you think it is. Before you begin, you will know where you will end up. If you don’t, don’t start. This is why research is so important, because if I can understand the period in which my characters live, I can shape their circumstances and attitudes into the narrative.  With Blood and Silver, because I had taken the time to insure that every aspect of my world would be historically accurate, the attitudes and tones of my characters occurred organically. I simply placed my fictional characters into actual settings and let them take me where they wanted to go.

Thanks for reading and happy writing!
Best, Vali 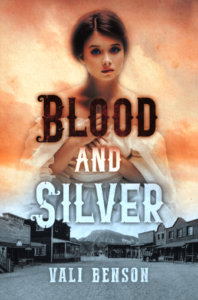 About the Book: What is a twelve year old girl to do when she finds herself in the silver boom town of Tombstone, Arizona, in 1880, and her only home is a brothel and her only parent is a drug-addicted mother? If she is Carissa Beaumont, she outsmarts the evil madam and figures a way out.

After tricking the madam, Miss Lucille, into summoning a doctor for her mother, Lisette, she discovers that Miss Lucille has been drugging her. She and the kind doctor make a plan to try to save Lisette by dosing her down on the drug.

Doctor Henderson tells Carissa that the only source for the drug is a Chinese immigrant named China Mary, who lives in Hoptown, at the other end of Tombstone. Carissa has no choice but to go to the powerful woman for help. Many say that China Mary is the one who really controls Tombstone.

China Mary admires Carissa’s brave spirit, and uses her influence to get her a job at the new Grand Hotel, which will free Carissa from her many duties at Miss Lucille’s. She will work along with Mary’s twelve year old niece, Mai-Lin. The two girls become fast friends.

Then, disaster strikes, and the two girls must work together to stay alive.

With a host of colorful characters and meticulous attention to period detail, Blood and Silver is a story of the best and worst of human nature, the passion for survival and the beauty of true friendship.

About the Author: Vali grew up in the Midwest. She now lives in Tucson with her husband, two sons and grandchildren.

After graduating from the University of Illinois, Vali started and sold two successful businesses before she decided to pursue her real passion of writing. She published several articles in a variety of periodicals, including History Magazine before she decided to try her hand at fiction.

In April of 2020, Vali published her first novel, Blood and Silver. That same month, she was also made a member of the Western Writers of America.

1 thought on “Author Guest Post: “Insights from a First Time Author” by Vali Benson, Author of Blood and Silver”