One of the most celebrated children’s books of all time is the mystical, beautifully-rendered mystery of Jack Hare, Masquerade, published in 1979 by Kit Williams. The book, a gloriously illustrated riddle, purported to lead to a treasure for the person who could solve the book’s mystery—a golden jeweled hare. After a bit of a scandal involving cheating, two British teachers solved the location of the jeweled hare. But, the lasting legacy of the book, other than its enjoyment as a beautifully illustrated book, is its contribution to children’s literature. The book created a sub-genre of writing, called “The Armchair Treasure Hunt Book,” which author Kit Rosewater, of THE DERBY DAREDEVILS series, wrote about in her masters thesis. When Rosewater sent a copy of her thesis to Masquerade author Kit Williams, he invited her “to an art show at his home in a tiny town in the UK. The art show was only three weeks after I got the invitation, but I was able to find cheap airline tickets and fly myself to and from London to meet him.” She attests that this literary pilgrimage was one of the absolute highlights of her life.

From home, you can take a literary pilgrimage through the story of Jack Hare, and the real adventures of those treasure-hunt-obsessed locals through this BBC article, which shows both images of the book, and tells the story of the real-life frenzy of the treasure hunt. You can see the original gold and jewel encrusted hare in several images, and pictures of the location in England where the treasure was found, in Ampthill, and of the author unveiling the treasure. When you’re done traveling through the world of Masquerade, perhaps it will inspire a treasure hunt of your own!

England has many sites of literature. KayLynn Flanders, author of SHIELDED, went out of her way to find “the statue of Hodge, Samuel Johnson’s cat.” She also visited “Platform 9 3/4 and the Globe Theater, and the British Library, with its Gutenberg Bible.” But perhaps the most famous British literary adventures involve a love of Jane Austen, and locations visited by the writer herself, as well as the many locations where films were made of her many books. Amanda Sellet, author of BY THE BOOK: A NOVEL OF PROSE AND CONS, worked in England as a nanny, and “had a chance to wander around Bath and Lyme Regis like an Austen heroine.” There is no substitute for being in the moors and crossing muddy grounds in heavy skirts, but Sellet helps us imagine it. “Feeling that windblown sogginess first-hand helped me understand why everyone was so moody and also prone to taking to their beds at the first sniffle!”

One way to immerse yourself in Austen’s world—perhaps in a cozy armchair with a just-poured cup of tea—is to virtually visit her home, which is now a museum. If you click on “explore” then on “the collection” you can find images from many of the precious items in the house, including the Clementi piano, the “Chawton leaf” wallpapered room, and the dining room fireplace and iron-forged grate. There are also images of the first editions of many books, of personal letters, and of Jane Austen’s jewelry.

New York City, arguably the center of the publishing world, has long been a mecca for literary pilgrimages. Chumley’s in Greenwich Village—a forge turned speakeasy—was a gathering spot for many famous authors, including Willa Cather and Edna St. Vincent Millay. And the New York Public Library is one of the most famous libraries in America, with copies of many famous first editions. But there are some secret literary spots as well. “When my family visited New York City, my teenage daughter and I insisted on visiting The Strand, the bookstore where Dash finds Lily’s journal in Dash and Lily’s Book of Dares by Rachel Cohn and David Levithan,” says Amy Noelle Parks, author of THE QUANTUM WEIRDNESS OF THE ALMOST KISS. And Kath Rothschild, author of the forthcoming WIDER THAN THE SKY, visited the Muppet Workshop at FAO Schwartz with her three-year-old to commemorate the location where each Dash and Lily make their own Muppets on their quest to get through the book of dares—and find one another. 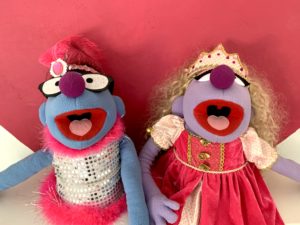 In addition to a virtual visit to The Strand, another famous literary bookstore in New York is Books of Wonder, a children’s literature bookstore, has an extensive online presence, with links to their artwork—one of the most special things about the actual location. In the actual Books of Wonder, the back of the shop has many amazing children’s books illustrations on display—but you can admire and discuss many through their website as well. And, although the FAO Schwartz and the Muppet Whatnot Workshop have closed, you can still create a Muppet through this blog: https://theawesomer.com/make-your-own-muppet/93745/, that shares the templates used by the original workshop. A fun activity to do with kids, cutouts of these eyes, noses, and make myriad different Muppets of your favorite literary characters. 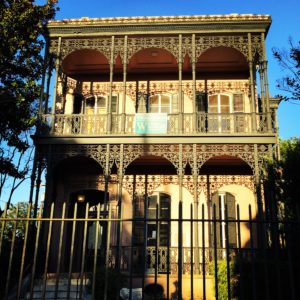 Ghosts and writers are equally abundant in New Orleans. An evocative place for a literary pilgrimage, New Orleans was home to Anne Rice, best known for Interview with a Vampire and The Witching Hour, and other Southern authors, like Tennessee Williams. It is a landmark for literature—from the hole-in-the-wall bookstore Faulkner House Books, in Pirate’s Alley in the French Quarter to the resting place of the famous voodoo priestess and midwife, Marie Laveau in the Garden District’s Lafayette Cemetery No. 1, referenced in many books and films. Haunted New Orleans is also the location for the third season of American Horror Story, which was filmed in the French Quarter and at one of the most famous haunted houses, the LaLaurie Mansion (1114 Royal Street). Rothschild visits the city that inspired so much literature annually. “There is nothing like walking through the streets of New Orleans. You can feel the history, the ghosts, pressing in on you. I listen and always find a story.”

Today, you can take a visual tour of Anne Rice’s old New Orleans home, and imagine the ghosts that the touched-up photos hide. Two locations feature images of the interior and grounds of her old home, here and here.

And, a short video brings you to the LaLaurie Mansion, to imagine the ghost stories it inspires even today. 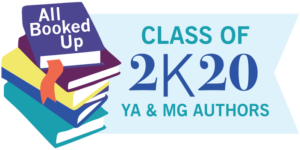 To find out more about the debut middle grade and young adult books in the Class of 2k20 books, visit https://classof2k20books.com/, Twitter @Class2k20Books; Instagram @class2k20books.

Thank you, Barbara, for writing about this for middle schoolers! It is a topic that needs to be talked about; we’re glad this book exists!

1 thought on “Author Guest Post: “Literary Pilgrimages and Armchair Pilgrimages Today!” by Kath Rothschild and the Class of 2K20 Books”