In my thirties, newly pregnant, I returned to my hometown library in search of my mother.

Once inside that maroon brick building, I was transported back in time. The thrill of possibilities lining the shelves, the card catalog with its array of seemingly endless wooden drawers, and the metal water fountain—where I struggled with how to simultaneously hold down the foot pedal and rise up on tiptoes to take a sip of water.

A gray-haired woman approached me. “Can I help you?” she whispered into the hush.

“Any newspapers over a year old are kept on microfiche. Follow me.” She drifted toward a side room full of machines that had clearly seen better days. A mysterious room, where grown-ups had unspooled reels and loaded slides into carousels, forgotten ways of recording the world. She demonstrated how to load the microfiche into the viewer and how to move the film around to find past articles, then she left me to my task.

“Good luck!” she said as she walked out of the room.

My eyes blurred as the years flew by. I slowed down as I reached 1970. Even more slowly I scrolled. January…March… April. I noticed the headline for the Apollo 13 launch on April 17 of that year, and stopped. I remembered that day at Shaler Elementary School in Ridgefield, New Jersey. It was a Friday, and my teacher, Mrs. McCurry, had marched us single file down the hall to the all-purpose room to watch the splash down with the entire school. Two large televisions were set up on the stage at the front of the room.

I overheard talk among the teachers that something might have gone wrong with the space shuttle and that the astronauts were at risk of burning up as they re-entered the Earth’s atmosphere. A tense chatter filled the room until we saw the first sight of the parachutes opening, and like purple butterflies the astronauts floated down to safety. Everyone cheered. But for me, the thought of those men floating around in a capsule, out in space, away from their families, left a sad and lonely sensation in the pit of my stomach.

I never understood why that feeling about Apollo 13 stayed with me so long. The astronauts had made it back to earth. They hadn’t blown up.

Sitting beside the industrial metal bulk of the microfiche viewer, carefully sliding the brittle plastic film forward, I was launched back to my childhood bedroom. Running along the wall next to my bed, right where my eyes landed was a line of white trim that extended out from the center windows. On the wood was a tiny indentation with some chipped paint, shaped just like a rocket ship, with what I thought at the time looked like fire, blasting it off into outer space. As I settled into sleep each night I would check to see that my rocket ship, my Apollo 13, was still there.

Scrolling down to May, I realized that the desolation lingering from that long-ago Apollo landing was actually from three weeks later, when my mother’s capsule didn’t protect her. Till that moment I hadn’t realized how close these two events were in real time. My memory had fused them together, overlaying the later dread with the earlier Apollo 13 landing.

Now I wondered if had it always been a rocket I saw there, or did it only become one after our lives exploded?

Increasing the magnification, I zoomed in to the top of the front page—May 8, 1970. At first all I saw was the large faded photograph of the demolished Ford Country Squire station wagon, smashed in, glass shattered.

I read the caption below, “A woman was killed and her small son critically injured in Palisades Park.” I didn’t want to imagine a “woman,” my mother, pressed inside what looked like an enormous accordion with all the air pressed out of it.

The story below unfolded: “Police say Mrs. Leddy, 32, of 389 Mayer Court, Ridgefield, was driving south on Grand Avenue when her car swerved into the northbound lane and crashed head on into a truck driven by Edward Martini, 45, of Staten Island. According to police, Martini was sitting in his van reading a road map when the accident occurred.”

When I paused the flat black and white microfiche, I thought how little of the story those spare words told. I knew the facts: My mother, with my baby brother in the back seat, was on her way to pick up my little sister from nursery school. An eyewitness saw my mother slump to her side, that it appeared she had fainted, resulting in her foot pressing down on the accelerator. The autopsy stated, with high certainty, that an aneurysm exploded in her brain.

Yet, in that moment, staring at the picture, the intoxicating smell of the burgundy leather seats returned—just months before the accident we had celebrated the arrival of our very first new car—and the reel of that long-ago day unfurled through my brain.

My nine-year-old self, along with my four siblings, staring at my father sitting on the edge of the bed.

My knees weak, I glanced away, trying to land my eyes anywhere but on my father’s face. Not wanting to see his tears.

“There has been a terrible accident,” he said. I was like one of my lightening bug trapped in a jar, looking for a way out.

Slowly he choked out the rest of the words. “Mom’s gone.”

“What do you mean she’s gone?” I understood, but I didn’t want to.

Barely audible, he said, “She died.”

One of us asked, “What happened?”

“We aren’t sure yet, but she was in a car accident.” He might have said more. I couldn’t take in his words—a wall had gone up between my ears and my mind.

After I left the library, eager for more memories of that day I called the Palisades Police Department. While I realized it was unlikely, I wanted to see if there might be a small chance someone there remembered the accident. Something they could tell me. A desk officer answered the phone.

“Palisades Police Department. Is this an emergency?”

“No. I just have a question. I’m wondering if there might be someone working in the police department that was here in 1970.” Adding, “There was a car accident…I was hoping to ask about.”

He said, “Well our Captain was here then. Maybe he’d remember. Hold on a moment. What was your name?”

“It was Kerry Leddy back then.”

As I waited, my self-consciousness grew. Should I hang up? This guy has better things to do. Who calls the cops twenty years later, expecting someone to remember a car accident?

“I can’t believe I’m hearing from you,” a voice said, nearly as whispery as the librarian. He sounded as if he had been sitting by the phone, awaiting my call. “How is your brother?” His voice choked.

I said, “I’m shocked you remember.”

Yet he gave me just what I was needed, what truly mattered: Captain Stanton remembered. Remembered my mother. Remembered our family. All these years he had carried her and us with him, linking the past to the present. That’s what I was searching for, to not forget.

I found my mother in the newspaper that day in the library, and I discovered that I’d merged our family history with that of the space program. Then I found an eye witness to the devastation our family faced—a man who’d just started a family of his own when my mother died—and he’d spent time inventing a future for our family. That factual and emotional confirmation, together on the same day, launched me to write my novel, Meet the Moon. I remembered, embellished, and invented a family grappling with grief in hopes of reaching readers the way I reached the policeman, who gratefully said to me, “I can’t believe I’m hearing from you.” 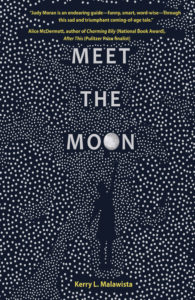 About the Book: In 1970, 13-year-old Jody Moran wants pierced ears, a kiss from a boy, and more attention from her mother. It’s not fair. Seems like her mother is more worked up about the Apollo 13 astronauts, who may not make it back to earth safely. As it happens, the astronauts are spared a crash landing, but Jody is not, for three days after splashdown, her mother dies in a car accident. Now, Jody will never know if her mother really loved her. Jody’s father has taught them to believe in the “Power of Intention.” Announce what you want to the world to make it happen. But could the power of Jody’s jealousy and anger have caused Mom’s accident? To relieve her guilt and sadness, she devotes herself to mothering her three younger siblings and helping Dad, which quickly proves too much for her, just as persuading quirky Grandma Cupcakes to live with them proves too much for Grandma. That’s when Jody decides to find someone to marry her father, a new mom who will love her best. Jody reads high and low to learn about love, marriage and death. For her adolescent firsts—kiss, bra, and boyfriend—she has the help of her popular older sister, her supportive father, and comical Grandma. But each first, which makes her miss her mother, teaches her that death doesn’t happen just once.

About the Author: Kerry L. Malawista, PhD is a writer and psychoanalyst in Potomac, MD. She is co-chair of New Directions in Writing and founder of the recent project The Things They Carry – offering virtual writing workshops for healthcare and frontline workers. Her essays have appeared nationally in newspapers, magazines and literary journals including The New York Times, The Washington Post, The Baltimore Sun, The Boston Globe, Zone 3, Washingtonian Magazine, The Huffington Post, Bethesda Magazine, Arlington Magazine, The Account Magazine, and Delmarva Review, which nominated her for a Pushcart Prize. She is the co-author of Wearing my Tutu to Analysis and Other Stories (2011), The Therapist in Mourning: From the Faraway Nearby (2013), both published by Columbia University Press, and Who’s Behind the Couch (2017) published by Routledge Press. When the Garden Isn’t Eden: More Psychoanalytic Concepts from Life will be published by Columbia University Press spring 2022 and her novel, Meet the Moon will be released September 2022 by Regal House Publishing. Her website is KerryMalawista.com.