“Understanding Race in a Country Divided”

Race and racism can be tricky topics to discuss in the classroom. With so many diverse experiences, perspectives, and opinions on these emotionally-charged issues, it can be tempting to avoid conversations about race to skirt potential conflict.

But if there’s any hope of creating greater harmony and understanding among people of all colors in our society, we have to face these issues head-on. Our kids must learn to discuss racial issues openly, with honesty, empathy–and historical perspective.

To my mind, no fruitful discussion of the United States’ racial issues can occur without having a comprehensive grasp of America’s history of race relations. This long and painful story is key to understanding today’s divisive racial climate and recognizing how America’s past continues to haunt and impact race relations today.

My book, Race Relations: The Struggle for Equality in America, helps put the complexity of contemporary U.S. race relations into historical context. It offers kids the chance to explore race and racism in ways that promote critical thinking about difficult societal problems.

The book begins, not with slavery, but with the creation of racial categories in the fifteenth century. Readers learn, in a fact-based way, how European colonizers embraced and honed these categories to create a racial hierarchy to justify the enslavement and persecution of races they believed to be inferior. Even as some people fought against it, this hierarchy would become codified in U.S. laws and woven into American social codes for the next 400 years, substantially affecting how people of different colors view and treat each other.

Race Relations guides tweens and teens through these four centuries of American race relations. It touches every major era, from colonization and slavery to Reconstruction, Jim Crow, and Civil Rights to the presidencies of Barack Obama and Donald Trump. Links to online primary sources such as narratives, laws, articles, poems, songs, statistics, and even YouTube videos help them explore the nature of American race relations during each era and allow them to consider how relations have changed–or haven’t–over the years.

The book also fosters discussions of contemporary racial issues, such as voting rights, imprisonment rate disparities, and affirmative action, and asks students to reflect on concepts such as racial bias, prejudice, and privilege and how these impact their lives. It further highlights current social justice movements, including Black Lives Matters, and encourages students to consider actions they can take to help improve race relations.

I wrote Race Relations to provide young teens with the tools for recognizing racism and the historical context for talking about it.  Only by addressing these problems can we begin to bridge our differences, understand each other’s realities, and build a more peaceful and unified society.

Here are some activities to get healthy conversations started!

History isn’t the only factor that can influence our perception of races different from our own. Naturally, having a personal relationship with people of a different race plays a huge role in your perceptions, as does the nature of that relationship with them. But we also receive input from a variety of other sources—our family, friends, neighborhood, community, images on television, magazines, newspapers, books, videos, and music. How do all these factors influence our perception of race?

To investigate more, give yourself an assignment of reading, watching, or listening to books, movies, and music produced by people from each of the different races. Does this change your perception? If so, how?

Before Europeans arrived in 1492, an estimated 54 million Native Americans were living in what is now the United States. Within decades, millions died due to European diseases, war, and displacement. By 1890, the Native American population had dropped to 228,000. Although historians debate whether the devastation of the Native American population was an intentional genocide, they do not dispute that Europeans caused the dramatic depopulation, whether by acting purposefully, accidentally, or with reckless indifference.

Trace the history of one of the Native American tribes. Choose between the Cherokee, Iroquois, Mohawk, Seminole, Sioux, Comanche, Algonquin, or Cheyenne.

Make a timeline of significant events in the tribe’s history. These should include important relationships with colonists or Americans, treaties made with the U.S. government, wars, peacetimes, displacements, and current status.

Research the culture of your chosen tribe. How did the historical events affect that culture?

To investigate more, write a short play or scene about an event in your chosen tribe’s history that affected its lifestyle or population. Incorporate differing views tribe members may have had and how they may have felt looking to the future.

More classroom resources can be found at https://nomadpress.net/wordpress/wp-content/uploads/2018/07/Race-Relations-Classroom-Guide.pdf. 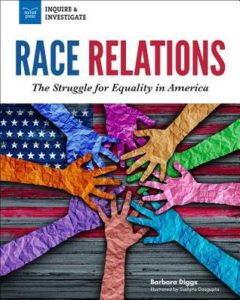 About the Book: How could a country founded on the honorable ideals of freedom and equality have so willingly embraced the evils of enslavement and oppression?

America’s history of race relations is a difficult one, full of uncomfortable inconsistencies and unpleasant truths. Although the topic is sensitive, it is important to face this painful past unflinchingly—knowing this history is key to understanding today’s racial climate and working towards a more harmonious society.

In Race Relations: The Struggle for Equality in America, kids ages 12 to 15 follow the evolution of race relations in America from the country’s earliest beginnings until present day. The book examines how the concept of race was constructed in the seventeenth century and how American colonists used racial differences to justify slavery, discrimination and the persecution of people of color. Through links to online primary sources such as newspaper articles, letters, poems, and songs, young readers will explore how race relations changed—and didn’t—through the eras of Reconstruction, Jim Crow, and Civil Rights, and under the presidencies of Barack Obama and Donald Trump. 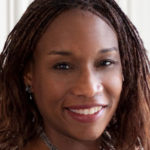 About the Author: Barbara Diggs is a non-fiction writer who has written a range of historical articles for children. Her work has been featured in Learning Through History Magazine, History Magazine, and Renaissance, among others. A graduate of Stanford Law School, Barbara practiced law in New York for several years before becoming a professional writer. She and her family currently split their time between Paris, France, and Washington DC. Website: barbaradiggs.com

Thank you so much for this guest post looking at the history, present, and future of race relations in the United States!