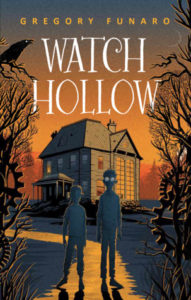 Summary: Deep within the enchanted woods in the town of Watch Hollow stands the once-grand Blackford House, whose halls hold a magical secret: a giant cuckoo clock that does much more than tell time. But when the clock’s gears cease to turn, an evil presence lurking among the trees begins to come out of the shadows.

When Lucy and Oliver Tinker arrive in Watch Hollow, they have no idea that anything is wrong. A mysterious stranger has made their father an offer that’s too good for him to refuse. All Mr. Tinker needs to do is fix the clock at Blackford House and fistfuls of gold coins are his to keep.

It doesn’t take long, however, for the children to realize that there is more to Blackford House than meets the eye. And before they can entirely understand the strange world they’ve stumbled into, Lucy and Oliver must join forces with a host of magical clock animals to defeat the Garr—a vicious monster that not only wants Blackford House for itself, but also seeks to destroy everything the Tinkers hold dear.

About the Author: Gregory Funaro grew up in Cranston, Rhode Island, and wrote his first story, The Ghost in the Window, in the fourth grade. He considers this to be his finest work, but unfortunately it has been lost to time. Following high school Greg majored in theatre at the University of New Hampshire, and after various acting gigs, received his AM in Theatre Arts from Brown University and an MFA in Acting from the FSU/Asolo Conservatory. He began his literary career writing thrillers for adults, but switched to children’s books after the birth of his daughter. His first book for Disney-Hyperion, ALISTAIR GRIM’S ODDITORIUM (2015), was a New York Times best seller and an Amazon Best Book of the Month, and his second, ALISTAIR GRIM’S ODD AQUATICUM (2016), received a Kirkus STARRED review. Look for WATCH HOLLOW and THE MAZE OF SHADOWS, coming from HarperCollins in 2019/20. Greg also teaches drama at East Carolina University, and is busy working on his next novel.

Review: I am so glad that Harper allows Gregory Funaro to continue expanding his creative tendrils because every one of his books I read, I am intrigued by how he crafts a story, the voice he gives his characters, the point of view he decides, and the surprises he gives me throughout the reading. With Watch Hollow, I love how Lucy and Oliver obviously have a voice even though the book is in third person, the way he ties everything together from the slightest mention at the beginning of the book to huge events in the end, and I love that I cannot predict what is going to happen.

And not only is the story crafted well, the plot is one that is going to suck in our readers that are always looking for spookiness. It is just the right amount of weirdness, supernatural, creepy mansions, unknown creatures, and magic. The characters are also crafted really well which gives the readers someone to connect with.

Teachers’ Tools for Navigation: Gergory Funaro’s fantasy is so different than the traditional fantasy books, and his stories will fascinate readers who may not be sure if they like fantasy because of the twist, turns, and intelligence in his narratives. Not only should his books be found in all libraries, classroom, public, and school, but it would also be an interesting to have an in-class book club focusing on different examples of fantasy and have students, at the end of the clubs, discuss what made their books fantasy and look at the wide variety within the genre.

“Oliver hung back in the doorway as Lucy and their father stepped into a cavernous, darkened foyer. Rectangles of dim dusty light filtered in from the rooms on the other side, and Oliver could just make out a wide staircase dissolving up into the gloom at the far end of the foyer…

Oliver pushed up his glasses, stepped inside, and set down his suitcase. His eyes had adjusted a bit, but with only the daylight streaming in, the foyer was still dim–in part because the walls were paneled three-quarters high in dark wood. To his left, he spied a shadowy parlor filled with antique furniture; to his right, a dining room with a long table. There were a handful of paintings on the walls, and where there was no paneling, the paper was peeled and gray…” (Chapter 4)

Read This If You Love: Explorer series by Adrienne Kress, The Peculiar Incident on Shady Street by Lindsay Currie, The Nest by Kenneth Oppel, A Monster Calls by Patrick Ness

**Thank you to the author for providing a copy for review!**