“Introducing the World’s Rainbow of Cultures to Kids”

I’ll never forget the first time two foreign students attended our school. The brothers, one who was in my grade, were refugees from Poland and shared stories about their experiences as they had moved through five different countries before finally being granted residency in the US. They spoke five languages fluently—something I still envy—celebrated holidays we’d never heard of and taught us games we didn’t know existed. In return, we introduced them to the basics of baseball, how to eat Oreo cookies the correct way and tried to explain why Thanksgiving was almost as important as Christmas when it came to American holidays. Thanks to these boys and other foreign students, who attended our school over the years, my interest in the world was sparked.

There are around 6,500 languages presently spoken in the world and more than 5,000 ethnic races. If each represented a different color in a rainbow swirl, it’d be an amazing mix!

Living in Europe, there wasn’t anywhere I could go without meeting people from various countries and cultures or hearing them converse in foreign languages as they went about their daily lives. Especially in the cities, the huge diversity was simply a part of life.

I was constantly amazed how the kids not only accepted this but thrived on it.

In the children’s choir I directed in Germany, there was a child from Italy and one from Spain. The first time we sang Happy Birthday (in German, and then in English), they each insisted on singing the song in their own languages too. Not wanting to feel left out, some of the other children went home and learned how to say ‘Happy Birthday’ in other languages. From then on, every birthday was celebrated through our growing list of wishes and songs. It grew to be quite the lengthy event, but the kids enjoyed every second.

Languages form an intimidating barrier, and the ‘strange habits’ of other cultures make the differences seem even larger, but especially kids look past such things and are open to other types and ways of life. How strange and fun it can be to let odd sounds roll across the tongue and know they have meaning! Or discovering an odd food or dressing in a completely different way. Cultures live and breathe and discovering this is exciting.

In the fifth grade, my son was assigned to do a report on Iceland. Of course, writing the report wasn’t exactly a joyful experience as he collected statistics surrounding the people, economy, history and political aspects of the country. Simply said, he hated doing it. Then, he had the chance to speak with someone from Iceland, learn a few words and phrases, discover some of their stranger foods and hear about other aspects of life.  The next weeks, he’d throw out random words in Icelandic, wanted to try Sheep’s Head Jelly (I was secretly happy we didn’t find it in any of the local stores), and—this I didn’t enjoy—spoke during meals while his mouth was full because ‘that’s what they do in Iceland’.

Thanks to the increased awareness of diversity, especially in children’s literature, it’s not difficult to find stories about other cultures or learn about the countries themselves. And the internet…well, that’s a realm of information all on its own. A word or phrase can be translated into almost any language instantly and spoken examples aren’t usually hard to find. My youngest loves to check her pronunciation for Chinese words on Youtube. She’ll pet the dog and say ‘gǒu’.

Games, toys, food, clothing, school life—most information is readily available and doesn’t dip into the looming hole of boredom. It’s these fun and seemingly strange morsels of information which also point toward larger explanations behind culture and history. There is a reason why people in Iceland don’t shy away from Sheep’s Head Jelly, and now, my son will never forget the importance of sheep in Iceland’s agriculture.

With an ‘international week’, kids can pick a culture and present a few words, games or other bits of information they discover and keep it fun. Even diving in with more depth into a few well known and less known cultures introduces the vast varieties of the world. But it’s not only about the differences. Everyone around the world eats, sleeps, can be afraid of the dark, loves their parents and enjoys jokes or playing around.

Introducing kids to the variety of the world isn’t only fun but broadens their way of thinking. There are several organizations and groups, which offer ideas and opportunities to help teach kids learn more. Some of these simply offer maps and virtual country tours, while others help organize Skype sessions with other classrooms or assist in connecting teachers and students with penpals from around the globe.

https://www.kidlink.org/ –  promotes a global dialogue for youth. It caters to teachers and students.
http://usa.ipfpenfriends.com/ – caters to classrooms and teachers
http://www.studentsoftheworld.info – started in 1995 and offers not only the chance to connect with youth around the world but has other information including games, maps and ‘virtual tours’ of other countries.

About the Author: Tonja Drecker is a writer, blogger, children’s book reviewer and freelance translator. After spending years in Germany exploring forgotten castles, she currently resides in the Ozarks with her family of six. When she’s not tending her chickens and cows, she’s discovering new adventures, nibbling chocolate and sipping a cup of tea.
https://twitter.com/TDrecker
http://tonjadrecker.blogspot.com
https://www.facebook.com/TDrecker 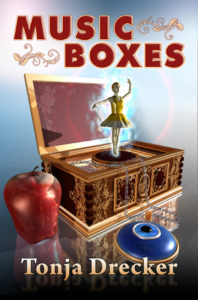 About the Book: “I only desire your talent…”

Twelve-year-old Lindsey McKay’s biggest dream is to be a famous ballerina. But after moving to New York, she ends up at the Community Center with a teacher who’s a burly bear in tights.
When she meets Madame Destinée, the teacher of a top dance school who offers her classes for free, Lindsey can’t believe her luck. In exchange, she must perform in the school’s exclusive midnight shows, ones sure to make her a star. But something’s not right…
One by one, the other dancers disappear. Each time they do, a music box with a figurine just like the missing ballerina joins Madame Destinée’s growing collection. If Lindsey doesn’t discover the truth about the dance school, she might end up a tiny figurine herself. https://www.goodreads.com/book/show/41452109

1 thought on “Author Guest Post!: “Introducing the World’s Rainbow of Cultures to Kids” by Tonja Drecker, Author of Music Boxes”