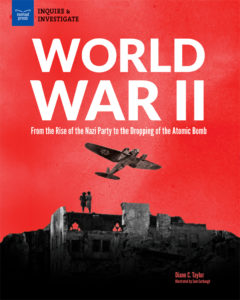 World War II: From the Rise of the Nazi Party to the Dropping of the Atomic Bomb
Diane C. Taylor
Published May 1st, 2018 by Nomad Press

Summary: Why did the world find itself immersed in another global conflict only two decades after World War I?

World War II: From the Rise of the Nazi Party to the Dropping of the Atomic Bomb introduces kids ages 12 to 15 to the political, military, and cultural forces that shook the globe from 1939 to 1945 and beyond. Middle school students examine the events leading up to, during, and after WWII and the repercussions of these events on populations around the world, from Germany’s invasion of Poland to the resulting domino fall of events that engaged several countries and caused the deaths of 60 million people, including 40 million civilians. They also see how the dark side of Hitler’s ideology was always present, eventually resulting in the Holocaust, the systematic murder of 11 million people, including 6 million Jews and other populations.

About the Author: Diane C. Taylor is a freelance writer whose published works include both fiction and nonfiction. She has written educational material for a nonprofit arts program in Dallas, Texas, and has been an English instructor for students in middle school, high school, and college. Diane lives in Bowling Green, Kentucky.

No event of the twentieth century was as big or as bad as World War II. For six years, from 1939 to 1945, a conflict that started when Germany invaded Poland quickly encompassed all four corners of the globe. No one—neither countries nor individuals—sat out this conflict. The political and economic reverberations of the war were simply too widespread to be ignored.

Like it or not, there was no such thing as being a disinterested party to World War II.

I think the same can be said as it pertains to teaching this subject to children. World War II fundamentally changed the world, and it’s not done affecting us even today. Conflict between Israel and Palestine. Tensions within the European Union. The role of the United Nations. The challenge of caring for displaced persons. The nuclear arms race. Just listen to the news and you’ll hear about scores of international issues that trace their origins back to the Second World War.

If all the world is a stage, then World War II is the de facto backdrop of the ongoing drama. This is why teaching about World War II and the Holocaust is a crucial part of raising future generations who can solve problems that were created before these kids were even born.

But how do you explain something as monstrous—and as monstrously complex—as World War II to a 12-year-old child?

That was the foremost question on my mind the entire time I was writing World War II: From the Rise of Hitler to the Dropping of the Atomic Bomb. To my immense relief, I discovered that World War II can be dismantled and reassembled into a coherent narrative that a young reader can understand. If you take one piece of the story at a time, and strip it down to its barest essentials, you can put it all back together in a way that makes sense of the mass insanity that was the Second World War.

By working to ensure our kids know the history and consequences of the greatest conflict in human history, we can do our best to avoid future wars on the same scale.

Hands-on activities are another great way to make the experiences of World War II feel relevant and important to teenagers. Try one of these!

Throughout World War II, starvation was a constant concern. Food was scarce everywhere. As a result, people frequently planted vegetable gardens in any available outdoor space.

Form a group with friends or classmates and take a walk around your neighborhood. Your goal is to figure out where you can grow food.

Draw up a map of where you will plant your gardens and indicate what you will grow. Can you calculate how much food you will produce or how many people will you be able to feed?

To investigate more, find out as much as you can about where you food comes from right now. Is much of it grown locally, or is it transported from far away? If the food distribution system in your area were disrupted, what products would stop showing up in the grocery store?

On December 8, 1941, Americans tuned their radios to hear President Roosevelt declare war against Japan. You can listen to that address at this website.

Or try searching these words together: Roosevelt, congress, war.

In an era before television, this is most likely how you would have experienced this historic event.

Discuss your reaction to FDR’s speech among your classmates or friends, or write a journal entry.

Would you have chosen to take the United States to war, or would you have followed the lead of Rep. Jeanette Rankin, who voted against the war? Compose and deliver a brief speech of your own, outlining your reasons for either going to war or staying out of the fight. Assume your audience is made up of friends or classmates.

To investigate more, click here to listen or watch speeches that other presidents of the United States have given. Contrast and compare one of those speeches to the one you listened to from President Roosevelt. How do they differ in style, language, and substance? How are they similar?

Thank you so much, Diane and Nomad Press!