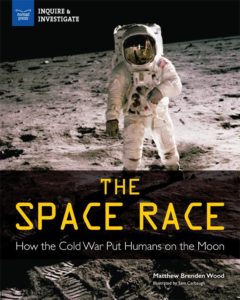 The Space Race: How the Cold War Put Humans on the Moon
From the Nomad Press Inquire and Investigate Series
Author: Matthew Brenden Wood
Illustrated by: Sam Carbaugh

Summary: What do you see when you look up at the night sky? The potential for amazing discoveries and scientific advancement? During the 1950s and 60s, some people also saw a place that needed to be claimed.

In The Space Race: How the Cold War Put Humans on the Moon, middle school students will explore the bitter rivalry between the United States and the Soviet Union that served as fuel for the fire that catapulted rockets into the great unknown of the next frontier-space. While Neil Armstrong will always be remembered as the first person to set foot on the moon, the people and events behind this accomplishment populate a fascinating tale of politics, science, technology, and teamwork that resulted in what might be the greatest accomplishment of the twentieth century. 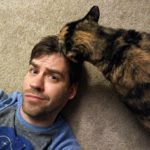 About the Author: Matthew Brenden Wood is a math and science teacher with a passion for STEAM education. He is also an avid amateur astronomer and astrophotographer. Wood holds a bachelor’s degree in astronomy from the University of Massachusetts at Amherst and lives in Phoenix, Arizona.

What pops into your head when you think about the Space Race? Most people probably think of Neil Armstrong’s famous line, “That’s one small step…” Or perhaps they think of the sound of Sputnik’s beep as it circled the globe. But that’s only a part of the amazing story of a race that started more than two decades before Neil and Buzz left their bootprints in the lunar dust, even before President Kennedy declared that the United States would send people to the moon and return them safely to Earth.

The path to the moon started at the end of World War II, as the United States and Soviet Union eyed each other warily across what became known as the Iron Curtain. New and fearsome weapons such as the atomic bomb and the Inter-Continental Ballistic Missile were front-page news as both nations looked to outdo the other.

The West viewed the Soviets as a backwards nation, lagging far behind in technology, education, and industry. However, everything changed with the launch of Sputnik on October 4, 1957. People around the world marveled at the feat, and a new fear of communism swept across America. How had the Soviets beaten the Americans into space? What would they do next? How would the United States respond?

The launch of the world’s first artificial satellite was the firing of the starting gun in the race to the moon—it was also a new, dangerous development in the early days of the Cold War. Not only did the Soviets have a rocket that might carry a person into space, but that same rocket could carry an atomic bomb to any place on Earth. Suddenly, the United States was behind, and needed to catch up—fast. The race was on.

I wrote The Space Race: How the Cold War Put Humans on the Moon to take kids on the journey through the Space Race and the backdrop of the Cold War. For kids interested in history, it’s a look at how the relationship between the United States and Soviet Union shaped the world we live in today, from North Korea and Cuba to Russia and China. For those interested in space, it’s a window into the early days of space exploration and the incredible accomplishments on the way to the moon.

Teachers’ Tools for Navigation: Here are some activities to get your kids thinking about the space race!

The Cold War and Space Race were very important events in history. People around the world lived through the struggle between the United States and the Soviet Union, and millions tuned in to witness humanity’s first steps on a different world. Do you know someone who lived through these events?

Questions to consider include the following:

To investigate more, present their story however you think best represents their experience. You could write an essay, create a presentation, film a documentary—it’s up to you!

Protecting an astronaut from the dangers of space travel is a difficult task. The early spacecraft used by both space programs were small, cramped capsules designed with only one thing in mind—bringing the passenger back safely to Earth. Can you do the same? Here’s your challenge: design a “space capsule” to protect a raw egg from the forces of gravity!

To investigate more, challenge others to a contest. Compare your strategies and designs. What materials and ideas work best?

Thank you so much, Matthew & Nomad Press!