“Let Me Tell You a Secret”

It’s almost always the kids’ first question, “Where do you get your ideas?”

At school visits, I say the typical author stuff: I keep a file of items that I find interesting (true.) I read a lot of books and take notes (true.) I’m a veteran eavesdropper and will ask anyone almost anything (super true.)

But recently, I realized that I’m not being completely honest. All these above techniques give kids (their teachers and librarians) the impression that “ideas” are purposeful. As in, “I think I’ll write a book, which idea will I use?”

That kind of thinking is exactly why I remember disliking the writing I had to do for school (honestly, I hated writing, so if you know a kid that hates it, maybe she’ll be an author!)  I hope things have changed, but I remember school writing as a series of prompts: Write about an adventure. How would your dog talk? What if you lived on the moon?

Though I was a natural blabbermouth, writing prompts paralyzed me.  As a third grader faced with blank paper and a “creative writing” prompt, my overwhelming thought was, “What if a girl has nothing to say?” Which gave me the idea (still in there, btw) that I was somehow “bad” at writing. Because I couldn’t create on cue, didn’t like fantasy, and couldn’t write about what I didn’t care about.

Maybe it’s idealistic, but I’d rather kids want to write, not have to write—you know, the way most of them really want to talk. Rather than making it seem like real writers wrack our brains and go over idea lists when a project is due, it’s time to let you in on a secret

My ideas, almost all of them, are accidents. I’m doing one thing and something else comes up. I’m reading one thing and something else is mentioned. Writing is following your mind wherever it goes. It’s noticing what’s around you. Kids (those who love writing and those who don’t) are great at noticing! Yet, writing ideas are sometimes presented as if they are foreign objects a kid has to sweat over and hunt out. It’s not true. For example, I tripped on the idea for my newest book doing something most kids love, surfing the internet.

The Secret Kingdom, is the true story of an outsider artist in India named Nek Chand.  I had no “ideas” in a folder about Nek Chand, or his large art environment, the Rock Garden of Chandigarh. I knew nothing about outsider art. Instead, I was working on a draft of a Van Gogh picture book (now the book, Vincent Can’t Sleep) that was going nowhere. I was bored. I was frustrated. I spent hours on Twitter and FaceBook. Vincent was driving me crazy–I couldn’t come up with the right words to show how he loved being outside at night. I hated Van Gogh, and I hated writing. I sat in my office searching random things on my laptop, and accidentally googled something like, “artists working outside.”

Boom! There was a picture of a waterfall with oddly cool statues in front of it. What’s that? Wait! One guy made that? How? Out of recycled scraps? Where? In India? Vincent went into a file folder and I was off in search of the story that became The Secret Kingdom.

Every author works differently, but that’s how my books are born. They don’t come from lists of ideas, but instead from accidental encounters and questions. Books are born from what I don’t know. Books are born from, “Wow! Cool!” And since kids are the wow-est, cool-est people on the planet, hopefully we can all find ways to let their reading and writing reflect their passions.

One of the other common school visit questions (teacher prompted I’m sure) is, “How do you do your research?” Again, I usually answer, “in libraries, and traveling to the settings of my books.” For various books I’ve visited national parks, presidential homes and watched cars race on a beach.  When kids write though, schools typically can’t provide those kinds of experiences.  So, what do you do when you can’t visit?

I’d never really run into that situation before, but that was the case with The Secret Kingdom. Though I desperately wanted to travel to Chandigarh and see Nek Chand’s Rock Garden, a research trip to India was totally out of this picture book author’s budget.

How could I experience it instead? Look at every single photo, map and schematic of the Rock Garden I could find. Read every book or article ever written about Nek Chand or his artwork. Track down and talk by email to people around the world who knew Nek Chand, his work and had visited the place themselves. Discover that a small museum within driving distance had the largest collection of his work in the U.S. Contact the U.K. based foundation trying to support his legacy. Most importantly, ask people culturally familiar with the setting and Mr. Chand to read drafts and comment. The way Nek Chand picked up scraps of village life and built them into art is the way I collected people who helped tell his story. We became a community convinced that the story of one refugee who created a new home with his art was important for today’s children.

Here’s the secret about writing that I promise to share from now on. There isn’t a list. There isn’t a right way. Honor the way you think. Be open to what life throws at you. Surround yourself with people who care. Creating books or any other art is a lot like life, a series of lovely accidents. 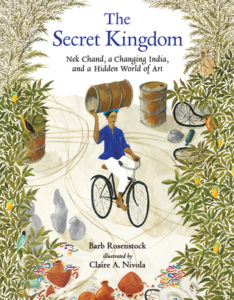 About The Secret Kingdom: Nek Chand, a Changing India, and a Hidden World of Art, by Barb Rosenstock, illustrated by Clarie A. Nivola:

After the partition of India in 1947, Nek Chand Saini settled in the city of Chandigarh, with nothing but stories brought from his homeland. Dismayed at his stark new surroundings, Nek began collecting river rocks, broken glass, and cracked water pots found on the roadside. He cleared a section of jungle and for seven years he stockpiled odds and ends. They were castoffs and rubbish to everyone else, but to Nek, they were treasures. He began to build a labyrinth of curving paths, mosaics, and repeating patterns: his very own tribute to the winding village of his youth, a hidden land of stories. Nek kept his kingdom secret for fifteen years, until a government crew stumbled upon it and sought to destroy it. But local fans agreed in awe: the Rock Garden had to be protected. Author Barb Rosenstock introduces readers to the outsider artist’s stunning creation, while Claire A. Nivola’s illustrations bring to life the land’s natural beauty and the surreal world Nek coaxed from his wild landscape. 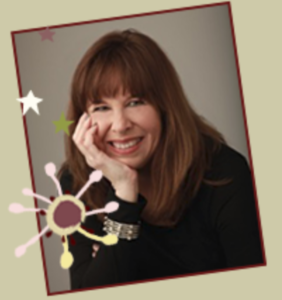 Barb Rosenstock is a children’s book author who loves true stories. Her work includes The Camping Trip That Changed America: Theodore Roosevelt, John Muir, and Our National Parks, illustrated by Mordicai Gerstein; The Noisy Paint Box: The Colors and Sounds of Kandinsky’s Abstract Art, illustrated by Mary GrandPré; and many others. Barb Rosenstock lives in Chicago.

Thank you to Barb for her amazing post showing us insight into author-dom!
If you haven’t read any of Barb’s amazing nonfiction picture books, you should get on that now! 🙂

**Thank you to Kathleen and Phoebe at Candlewick for connecting us with Barb!**

4 thoughts on “Author Guest Post!: “Let Me Tell You a Secret” by Barb Rosenstock, Author of many nonfiction texts including her newest, The Secret Kingdom”